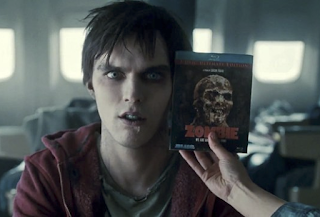 It wasn't much of a surprise that "Warm Bodies" took the top spot at the box office this weekend, as it was about the only film releasing that felt like it had a solid built-in demographic. There was hope that "Bullet to the Head" wouldn't fall to the same fate as previous action films "The Last Stand" and "Parker", and lucky us, it didn't! It actually managed to do worse... Yes, it looks like this wave of 80's action icons getting back on the screen in solo roles might have finally run its course. Help us, Bruce Willis, you're our only hope.

Overall, the numbers took another huge hit, dipping another $20MM or so from last week's already pitiful totals. The $68MM that the top films made this weekend was "beat" (less) only once in 2012, and that was in September, when "The Words" and "The Cold Light of Day" were the big openers. Yikes.

As a great example of the pace we're on this year, this same weekend last year saw the opening of "Chronicle" and "The Woman In Black"; and it was week two for "The Grey". Say what you will about any of those titles, but I don't see a single one of those three in the films that have released over the last couple of weeks.

If nothing else, at least these terrible box office numbers make my job incredibly easy. With nothing hitting big milestones and nothing opening with numbers setting new standards for particular genres or categories, there's just not much to mention outside of the actual earnings (and maybe that's the way you people like it anyway). I'll start with "Warm Bodies", and we'll see if we can find anything notable for this film. It made $19.5MM this weekend, but added another $500K on Thursday, bringing it's total domestic tally up to $20MM. This is about where I predicted it, picking up Hansel & Gretel's dollars from last week. No official budget is listed for the film, but a couple of other sources have it in the $35MM range. The film has received strong reviews so far, which should likely help this film to maintain relevancy for the next couple of weeks, at least.

Believe it or not (not that it should be too difficult, as this is traditionally a very slow movie time in the year), "Warm Bodies" actually accounted for the seventh-highest grossing opening weekend for a film opening Super Bowl Weekend. I'm not sure that's a stat we really care about, but it's a stat Box Office Mojo lists, and anytime you can make your way into a Top 10 All-Time list, you're doing something all right. The film also recorded the eighth-highest opening weekend amongst Zombie Movies, though I'm not sure I agree with "Hotel Transylvania" being atop that list. Still, another Top 10 isn't bad.

Okay, now we'll really fly. "Hansel & Gretel: Witch Hunters" came in second this weekend with $9.2MM. How it managed that much, and only a 53% drop from last weekend, befuddles me. It's now made a total of $34MM domestically and a strong $62MM internationally, resulting in a worldwide total of $96MM, which already nearly doubles its budget of $50MM. The film is up to the #6 spot on the list of Witch Movies, though there's really not a lot of competition in there.

Third place this weekend went to Best Picture nominee "Silver Linings Playbook". The film upped its theater count again this weekend (now up to a near full 2,800), and added $8.1MM to its gross. That now makes for $80.3MM domestically, on top of another $19.7MM internationally, for a perfect total of $100MM so far. And with a budget of only $21MM, this one as done exceptionally well. It was one of my favorite movies of 2012, and I'm glad that it's being seen by audiences.

Sandwiched in between Silver Linings and another Best Pic nominee one spot below was "Mama", earning another $6.7MM this weekend. It's now made just over $58MM domestically, and even though it's had little help overseas, with only a $15MM budget, this one is doing just fine. This was the third week for "Mama" and numbers have held fairly well. Overall reviews have been positive, and while most of the writers at our site enjoyed this flick, there were still some very notable qualms. In another bit of news, however, the theme of Mothers is a thing, and with it's gross this weekend, the film moved up to sixth place on that list, surpassing Danny DeVito's 1987 film, "Throw Momma From the Train". I suppose that's a good thing, right?

On to the fifth spot, where it was the bottom of that sandwich, "Zero Dark Thirty", earning $5.3MM. That's now $77MM domestically and a surprising $13MM internationally for $90MM total. The film had a budget of $40MM, so it's already more than doubled those numbers.

Outside of the Top 5, "Bullet to the Head" opened in sixth place with $4.5MM. Recent action flicks like "The Last Stand" and "Parker" have landed in the $7MM range, which was already considered a disaster. "Bullet to the Head" looked like actually the best film out of the three, but it did the worst. There's no budget listed here, so I'm not sure what to compare this to, but regardless, it's bad. We may have hit the bottom of the well with this genre/theme, and for those nostalgic types out there, this is unfortunate. That being said, I think there's still hope if guys like Schwarzenegger and Stallone go back to their previous franchises. Give me more Rambo; sure, I'll take another Terminator movie; what about another Predator flick, or Tango & Cash? Who wouldn't love seeing Stallone and Russell team up again? There are options out there, these guys will just have to sacrifice on creating new things (but let's be honest, are we really losing that much by not getting more The Last Stands or Bullet to the Heads?).

As for some milestones this weekend, it was many of the Best Picture nominees that hit big numbers. This weekend, seven of the nine nominees reside in the Top 15. Only "Beasts of the Southern Wild" and "Amour" are not present. But this week "Django Unchained" hit $150MM, "Les Miserables" hit $140MM, "Lincoln" hit $170MM, and "Argo" (fresh off its DGA win) hit $120MM. All great numbers from some of the best films from last year. I'm glad most of these are still around in theaters for people to check out.

That's all I see this week though; check out the full numbers below, courtesy of Box Office Mojo: 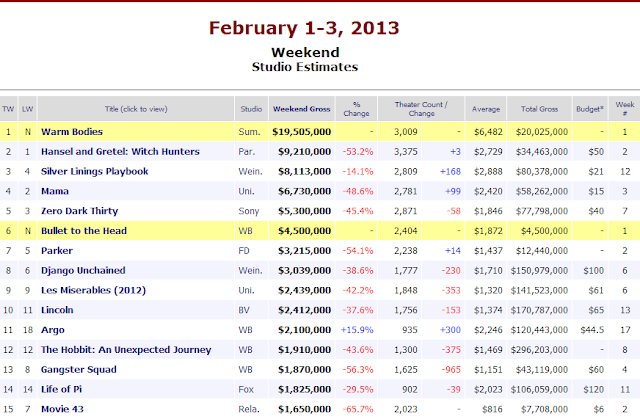