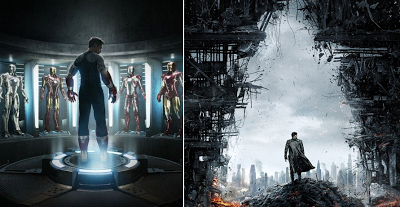 The Super Bowl, this year between the Baltimore Ravens and San Francisco 49ers, marks a notable day for studios to release new content for their upcoming big-budget films. And they have to be the biggest budgeted films the studios have to offer, because the average price of a 30-second block of ad time during the Super Bowl costs just over $3MM. And with some of these mini-trailers extending for more than a minute of time, you can quickly be looking at $7MM+.

Many would argue whether or not it's worth that - and there's probably a very good argument in there - but statistically speaking, more than 100 million people will watch the game this year, creating for the most extensive, one-time opportunity to get your content out to the public.

First, here's the ad for "Fast and Furious 6". This is the first motion content we've seen for the film, and overall I like what we have here. I'm not sold on that bit and the very end, but we'll see what happens. The film opens May 24, 2013.

"Iron Man 3" provided this tasty tidbit, that I have to say, really left me wanting more. There's actually an extended spot that was released as well, that all involved parties had a little fun with. It doesn't provide any more insight to the particular scene featured previously, but there's some good stuff there. I will say that this spot has helped to raise my excitement levels, even if only slightly. Look for this in theaters May 3, 2013.

Next up, "Star Trek Into Darkness". I'd have to go back and watch the earlier trailers again, but I didn't really feel like I was getting much that was brand new here. I'm still looking forward to this film, but I was hoping for more. Star Trek hits theaters May 17, 2013.

"The Lone Ranger" hasn't done much for me from the start, but this is the best trailer so far. Honestly, I think I'd be more into this if Johnny Depp were not in the film, but I also realize that he's their only marketing tool though, so it's a no-win either way. The film hits theaters July 3, 2013.

The more I see from "Oz the Great and Powerful", the less interested in it I get. It's cool that Sam Raimi is directing, and it looks as if he'll at least bring a good visual style to the film, but ultimately, this just looks too kiddie for me. And the fact that it's rated PG is a huge detractor. I still might go see this in theaters if the timing is right, but there was little here that gave me any more interest than I already had. The film opens March 8, 2013.

Everything in the "World War Z" promo is content we've already seen, just tightened up. It still sets the stage nicely, and I can't quite tell if they've improved on the CGI effects, or if it just goes by so quickly that you don't notice. This is still a major film of intrigue for me this year, and I'm hoping we get a more finalized full-length trailer in the near future. This one hits theaters June 21, 2013.

Now we really start getting into some films that are of little interest to me. "Snitch" barely made it into our Most Anticipated For February post last week, but I don't think anyone is expecting much. Dwayne Johnson has proven to be a viable action star, but I doubt this will be much more than 2010's "Faster" - yeah, I didn't see it either.

Finally, it's the spot for "21 and Over". It doesn't look like there's much here for me, but for the crowd that liked "Project X", this will probably be right up your alley. I can't believe the end states that this one is not yet rated. If this gets anything but an R-rating I will completely write it off; this film has to be insane to even stand a chance of being worthwhile. Look for it in theaters March 1, 2013.


What do you guys think of all these spots? Anything you were hoping for more from? Anything that provided more than you expected?
Movie Trailer