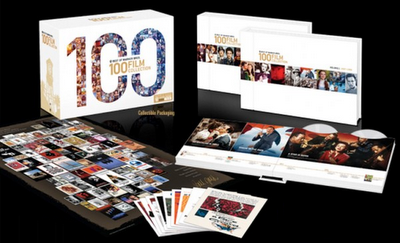 These movie collections just keep getting better and better! Recently, in honor of the 100th Anniversary, Universal Studios unveiled a 25-movie collection, featuring some of the most notable films from the studio's filmography. This seemed like a great way to cap off their centennial year, and a gesture that would surely bode well with fans (I know I loved it!).
Flash forward to this week, where in celebration of their 90th Anniversary (2013), Warner Bros. Studios has debuted a little collection of their own. There are actually two sets that will be rolled-out for pre-order on December 25, 2012 and available for purchase January 29, 2013. One is a 100-film DVD set, the other a 50-film Blu-Ray set, both featuring all 22 Academy Award winning Best Picture films from over the years. The Blu-Ray collection will feature a handful of films being offered in the format for the first time, while the DVD set aims to simply stock your collection with more notable titles than you know what do with with. Both feature plenty of old and new releases, with notable titles like "The Wizard of Oz", "Casablanca", "Ben-Hur", "The Exorcist", "The Shining", "Unforgiven", "The Matrix", "The Departed", and "The Dark Knight".
Both sets will also feature two Warner Bros. documentaries, detailing the various histories of the studio, the films it's produced, and the filmmakers who have worked them.
Hit the jump for Warner Bros.' official press release, detailing the complete listing of films available in both the 100-movie set and the 50-movie set, as well as pricing for each.

First, let's start with the trailer that Warner Bros. just released for the collection. It's not the most exciting or attention-grabbing trailer, but it outlines some of what to expect. Plus, the excerpts from various filmmakers briefly talking about some of their experiences is great; hopefully there will be a lot more of that in the two documentaries.

Anyway, here are the images for the sets, including pricing for both. This is a bit lengthy, but at least it includes all of the information. I gotta say, even though I have the Universal Studios box set on pre-order, this looks damn impressive. As you will also see, the pricing is nearly as high as you'd expect for such massive collections. Even though the titles are fantastic and the packaging looks beautiful, dropping $600 for movies will be much harder to justify than the $250 price tag for the Universal Studios set. 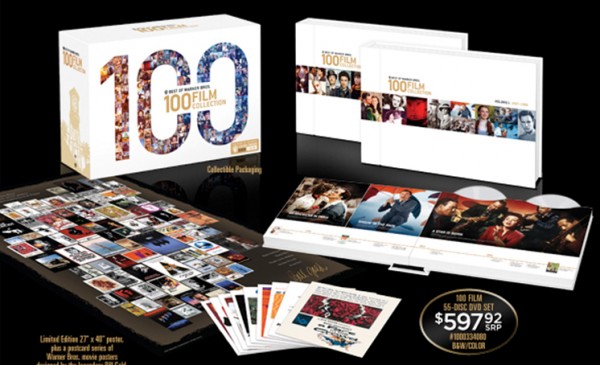 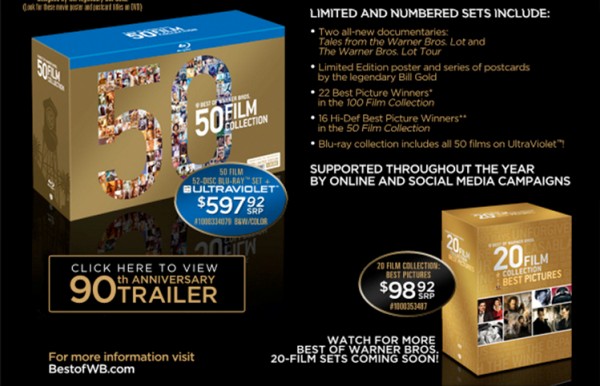 Burbank, Calif., October 3, 2012 — One of the most respected, diversified and successful motion picture studios in the world, Warner Bros. began when the eponymous brothers – Harry, Albert, Sam, and Jack — incorporated on April 4, 1923. Four years later, the release of The Jazz Singer, the world’s first “talkie,” set a tone of innovation and influence that would forever become synonymous with the Warner Bros. brand. Soon to be 90, Warner Bros. continues to entertain the world with films passionately produced, selectively acquired, carefully preserved and impeccably curated for both the casual and ultimate movie lover to enjoy forever.

As a result of all the films the studio has produced, co-produced (with numerous partners), acquired and distributed, Warner Bros. now boasts the largest film library in the world – 6,800 feature films, with 2,000 films currently available on DVD and Blu-ray™. The library includes 22 Academy Award®*-winning Best Pictures (the most in Oscar®history), and leading franchises such as Harry Potter™, Batman™, Lord of the Rings™, The Matrix and Superman™.

Beginning in January, Warner Bros. Home Entertainment Group will launch a major Anniversary initiative that will continue through year-end 2013. This includes the release of seven new collections, including two limited and numbered anniversary collections — 100 films on DVD and 50 films on Blu-ray, both the largest collections ever released, to date, in their respective formats. The year-long celebration will also include several stand-alone releases of new-to-format classics on Blu-ray™ for the first time, including The Jazz Singer, all three James Dean films (East of Eden, Rebel Without a Cause, Giant), Cabaret and Academy Award® Best Picture Winners Grand Hotel (1932), Mrs. Miniver (1943), and Driving Miss Daisy (1990).

Both of the above are limited and numbered collections and each includes a collectible poster and series of art cards featuring movie poster designs created by legendary American graphic designer Bill Gold.

Gold, who worked with Hollywood’s greatest filmmakers, including Clint Eastwood, Alfred Hitchcock, Stanley Kubrick, Elia Kazan, and Ridley Scott, had this to say:


“My 65-year career began with Yankee Doodle Dandy and Casablanca and continued on to every Clint Eastwood picture from Dirty Harry to Mystic River (and I came out of retirement to design the poster for J. Edgar). In my wildest dreams I could not have foreseen the world I would inhabit and the joy it would bring me over the years. Every poster I worked on had a story to tell, and I’m delighted to be able to share a sampling of some of them in these collections.”

Two New Documentaries to Celebrate Warner Bros. 90th Anniversary
Created specially for this anniversary, Tales from the Warner Bros. Lot is a full-length documentary that features some of Warner Bros.’ top talent and executives giving an inside look at the history of the studio. In on-the-lot interviews, stars including Clint Eastwood, Steve Carell, Morgan Freeman, Martin Sheen, along with current and former studio toppers Barry Meyer, Alan Horn, Bob Daly, and Terry Semel, and others, recount personal reflections and anecdotes about their experiences at the studio. Tales from the Warner Bros. Lot was produced by documentarian Gary Khammar (It’s So Audrey! A Style Icon) and producer Bill Gerber (Gran Torino).

Now, for the first time, home viewers can take the hugely popular Warner Bros Studio VIP Tour in this new documentary produced exclusively for the 90th Anniversary collections. In The Warner Bros. Lot Tour, an official WB Lot Tour Guide gives guests a “virtual” tram ride (of what some 200,000 annual visitors experience) — an extraordinary opportunity to see first-hand where movie magic happens at the world’s busiest motion picture and television studio. Unlike a theme park, the Tour represents a rare and intimate “behind-the-scenes” look at real Hollywood, winding through back lot streets, sound stages, sets and craft shops.

Those are pretty fantastic compilations. I can't imagine this will be one I'll be purchasing anytime soon, but it would be great to eventually own someday. It's unfortunate that the 100-film set isn't available on Blu-ray, and that alone might be enough to make me okay with passing on this collection for now. If I was going to spend hundreds of dollars on a box set like this, I'd go for the biggest one and want it in the best format available. Maybe someday when all of those films are converted to Blu-ray I'll be able to pick it up; for now, it's just a ridiculous collection to salivate over.

Will anyone be dropping the $600 for either of these sets after Christmas?
DVD Releases