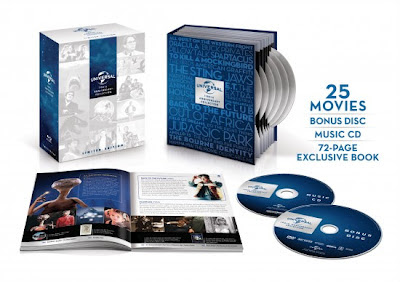 Surely you've seen much about this being Universal Pictures' 100th anniversary. From the various DVD & Blu-Ray re-releases, to even that awesome picture that featured 100 different filmmakers, the studio has been prominently displaying its centennial mark.

To seemingly cap off what has been a great year for the studio so far, they just announced the Blu-Ray collection to end all collections (not that it's the only one you need, but I haven't seen a more epic ensemble yet myself). This 25-film assortment is amazing. Really, it is. Not only are all of the films of quality and interest to most, but the bonus content associated with the box set really sets it apart from any other collection you'll find. Outside of the 25 different films, the “Universal 100th Anniversary Collection” will include a 15-track music CD full of some of the most iconic film scores of all-time, a “100 Years of Universal” 72-page collector’s book, a number of vintage cartoons and shorts, and a collection of featurettes covering the studio’s entire history.

The 25-disc Blu-ray set and 26-disc DVD collection (Schindler’s List is included in the DVD set only) will be available for a limited time starting November 6th. Apparently there isn't an official price set for the collection just yet, but if you hop over to Amazon for the pre-order, you get a pretty good idea of what we're looking at - a hefty price that doesn't much surprise me.

Hit the jump to read the full rundown of films and special features.

This is quite lengthy, but here's the full press release from the studio, detailing in-full everything included in the box set:


For 100 years, Universal Pictures has been entertaining audiences all around the world with some of the most unforgettable movies ever made. For a limited time only, own a piece of Hollywood history with the Universal 100th Anniversary Collection arriving on Blu-ray™ and DVD on November 6, 2012 from Universal Studios Home Entertainment. The collection features a selection of 25 unforgettable films that helped shape the legacy of one of the most successful movie studios of all time. Featuring prestigious Academy Award® winners such as To Kill a Mockingbird and The Sting, genre-defining classics like Dracula and Spartacus, captivating storytelling such as Field of Dreams and Do the Right Thing, blockbusters like Jurassic Park and E.T. The Extra-Terrestrial and pure entertainment with franchises including The Bourne Identity and The Fast and the Furious, these movies continue to have an enduring impact throughout the world.

Celebrate Universal’s 100 years of iconic memories and moments with this 25-film collector’s set, just in time for the holidays!

Hours and Hours of Bonus Content Plus Exclusive Bonus Disc:

100 Years of Universal
· The Carl Laemmle Era: Explore the early years of Universal and its founder Carle Laemmle.
· The Lew Wasserman Era: A look at Universal under the visionary leadership of Lew Wasserman.
· Academy Award® Winners: A look back at the most honored films in Universal’s history.
· The ‘70s: A look at Universal’s iconic movies and filmmakers during this dynamic decade.
· The ‘80s: Explore Universal’s legacy of groundbreaking movies and filmmakers from this memorable decade.
· The Backlot: A behind-the-scenes look at the movie magic created on the famous Universal Studios lot.
· Unforgettable Characters: Revisit Universal’s most memorable heroes, villains, comedians and screen legends.
· Restoring the Classics: An in-depth look at the intricate process of preserving the studio’s film legacy.

15-Track Music CD Featuring Scores from the Following Films:
· The Bride of Frankenstein
· Touch of Evil
· Psycho
· Spartacus
· To Kill a Mockingbird
· Airport
· The Sting
· Jaws
· E.T. The Extra-Terrestrial
· Scarface
· Back to the Future
· Out of Africa
· Jurassic Park
· Apollo 13
· The Bourne Identity


First off, there are so many great classics in there that I would probably never buy otherwise, but I would still really love to own. I've never owned any versions of any of the pre-1970 titles, and all of those listed would be good to have in most any media collection. And I actually don't own any of the 25 films on this list in Blu-Ray format, either (I just recently gave in and bought a Blu-Ray player; still building up the collection). But I'm already salivating over a handful of these titles like "Jurassic Park", "Back to the Future", "Jaws", "E.T. The Extra-Terrestrial", "Field of Dreams", etc. This would be an ideal way to come across each of them all at once. It'll be hard to drop that much cash on something like this, but ultimately, I think it might be more difficult to resist doing such. And all of those awesome special features are too good to pass up. I love film history, and all of the content on the '100 years of Universal' looks like something I can't wait to pop in my video player.

As mentioned before the break, you can head to Amazon to pre-order this epic collection for yourself on DVD or Blu-Ray. We're looking at over $200 for either version, but all in all, it seems like the price could be a lot steeper if they wanted it to be. Even if you take out all of the amazing bonus content that comes along with this (which would be so hard to put a price on anyway, as it's so unique), and just price it out on a per-film level, amongst 25 films, the $244 Blu-Ray price tag still breaks down to less than $10 per film. That's not too shabby! Most of these titles I would happily pay more than that for (a few I'd probably still demand to pay less though). But all in all, seems like a great deal.

What do you guys think? Will you be biting the bullet and purchasing this little gem?
DVD Releases