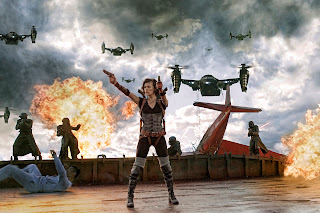 While it still amounted in the second-lowest overall total we've seen this calendar year, at least things appear to be on the upswing again. Expectedly, Paul W.S. Anderson's "Resident Evil: Retribution" took the top spot this weekend, out-dueling the re-release of "Finding Nemo" in 3D. Retribution became the fourth straight Resident Evil film to open with more than $20MM and take the top spot (though even with its bump of 3D sales, its tally was still down from the last installment). But while it was Paul W.S. Anderson claiming the top grossing spot this weekend, it was Paul Thomas Anderson's film, "The Master", that might have made an even stronger mark. The film only opened in five theaters, but if projections hold, did manage to set the per theater record for a limited release live-action film (Interestingly, surpassing another Anderson, Wes Anderson, and his 2012 hit, "Moonrise Kingdom").

Hit the jump and we'll go over the specific numbers, and try to get all of these Andersons sorted out.

So it was "Resident Evil: Retribution" taking the top spot with an estimated $21.1MM. This total keeps the film mostly inline with its predecessors, with still a small step back from the last film to release, "Resident Evil: Afterlife". Both of these films had the advantage of 3D ticket sales, but the latest film still made $5MM less than Afterlife. This isn't much of a surprise after a scathing review like this from our own Ben Foutch (if anything, we should be surprised it made this much). Amongst the Rotten Tomatoes group though, believe it or not, this film is currently the highest-rated of the franchise. It only sits a 35%, but that's still a point better than the first installment. This may change of course over the next few weeks, but right now, it seems that there are worse movies in this series you could invest your time in.

The film hasn't had its release internationally, but if Afterlife is any sort of sign of things to come, then I'd suspect this won't be the last Resident Evil film we see. Amazingly, Afterlife ended with an international gross of over $235MM, making for a worldwide gross of nearly $300MM. This was by far the most from the series, and probably the reason why we got film #5. Even if this newest film doesn't come close to that mark, with a budget of only $65MM, it doesn't seem like there's much to worry about for the studio. While critically these films haven't been the most impressive, there is a strong following of fans that seem to be fairly consistent over the years in paying to see these movies. The film will probably have pretty bad drop-offs in the coming weeks, but even still, at 1/3 of its budget already, it seems well on its way to a "success".

The film I expected to give Resident Evil a run for its money this weekend was "Finding Nemo 3D". This wasn't a new film of course (originally released in 2003), but it was the first weekend for its 3D re-release. With its $17.5MM gross, it made for the fourth-highest opening weekend of a 3D re-release of all-time (behind only "The Lion King", "The Phantom Menace", and "Beauty and the Beast"). I'm not sure if there's an international plan for this film or not, but as of right now, there are no totals in. With the $17MM this weekend, it did kick the film over the $350MM lifetime domestic mark, and it seems reasonable that by the time all is said and done this could end up hitting $400MM.

As we quickly scan through the rest of the films in the top ten, there were some decent holds all around, but nothing really too stand-outish. "Lawless" broke the $30MM mark this weekend, and while that's still not incredibly high, it's nice to see it get there. "The Expendables 2" broke $80MM, which inches it a little closer to that $100MM mark (though I can't imagine it gets there at this point). Also probably worth note, in two weekends now, "The Words" still hasn't surpassed the $10MM mark. As I discussed last weekend, the budget was only $6MM so it doesn't even really matter, but for a 10-day theater wide-release (in a very week time of year) with big stars, $9MM seems pretty disappointing to me.

As we move just outside of the top ten, I feel the need to revisit "The Dark Knight Rises", as it just surpassed $440MM domestically with its gross this weekend. The film is currently sitting at #8 on the all-time Domestic list, and #9 on the all-time Worldwide list. It should jump one more spot on the domestic list after whatever tomorrow's gross is, but it's difficult to see much more movement on either list past that. Still though, the film has solidly entrenched itself in the top ten of both lists, a feat worthy of recognition.

"Arbitrage" was new this weekend in 197 theaters, and while its per theater gross of over $10K was impressive and noteworthy, it was the film in the 18th spot this weekend seemingly more worthy of note. Paul Thomas Anderson's film, "The Master", has received critical praises from every festival it stopped at over the previous month or two, and it's hard to argue that any film has had as much awards buzz so far this season as this film has. So it shouldn't be much of a surprise that when general audiences got their first crack at it, they would show up in record number. The film, only opening in five theaters, managed a total gross of $730K, a per theater average of $146K. There have been animated films to debut to higher per theater averages than this, but as far as live-action films go, currently, this stands as the strongest. The bar was previously set back in May, when Wes Anderson's film, "Moonrise Kingdom", opened in four theaters with a per theater average of $130K. Obviously, with it only being Sunday, we're still in estimations, so there's still room for small fluctuations, but even with such, "The Master" should still finish the weekend with this record. The film gets an expansion next weekend, and I'll be curious to see what kind of numbers it will put up then.

Otherwise, still not the strongest of weekends, but with "Arbitrage" and "The Master" making solid impressions in their limited runs, it seems that hope is just around the corner. And with films like "DREDD", "Trouble With the Curve", "House At the End of the Street", and "The Perks of Being a Wallflower" all set to open next weekend, we could be due for a big boost. 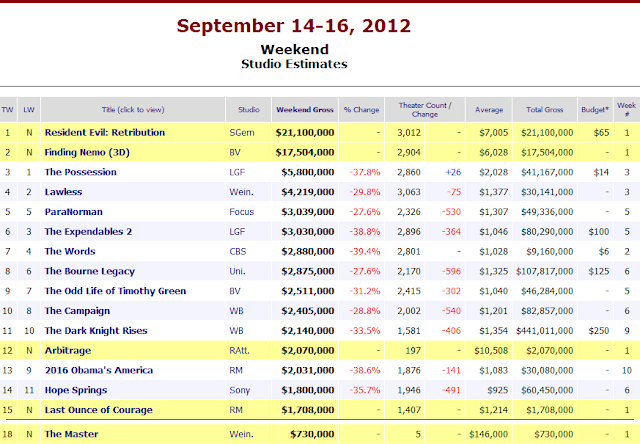