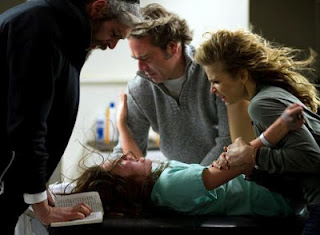 What's going on in the world? I feel like now that the big players from the summer are gone, it's pure chaos in the world of the box office. This is just spinning a wheel and whatever it lands on, those are the films that do well. Obviously since "The Possession" was one of these weekend's two wide releases we knew it would be in the top two, but where was everyone for "Lawless"? These two films took the top two spots, but flipped in order of what general convention would have predicted.

These were the only new releases in the top fifteen this weekend, and again, we only had one film break the $10MM mark. Another down week, but hey, at least we're $1MM up from last weekend's historically low overall totals!

Hit the jump for the full totals on all films this weekend.

So "The Possession" went and decided to make $17.7MM this weekend. I know that in Thursday's Weekend Releases post I said that the sole inclusion of Sam Raimi's name in the production of this film should help a bit, and still that's about the only thing I can figure that helped propel this film to such totals. The studio seemed to do a little better with the marketing for this film, but "The Apparition" must be scratching its head right now wondering how just one week later such a similar film could come in and make what they hoped for. I know that reviews for "The Apparition" were historically bad, but they really weren't that much better for "The Possession". Our own Ben Foutch did see this film this weekend and had expected but generally positive thoughts on the picture. There's no question to me that it looked like a huge improvement over "The Apparition", I just didn't think general audiences would feel quite the same way.

Back to the monies involved for this picture, the $17MM doesn't do much for any notable release marks, but the budget for the film was only $14MM, so the studio has to be happy about making its money back and more in just its first weekend. it probably won't make any substantial totals over the length of its theater run, but good for this film for finding an audience in an already extremely overcrowded marketplace.

Finishing second this weekend was the other wide release, "Lawless". Let me start by stating that I went and saw this film this weekend and loved it. It's one of my favorite films I've seen so far this year, and I'm surprised that more people weren't giving this a chance. It made an estimated $9.6MM this weekend, not even able to break the $10MM mark. I realize it's rated-R, and a depression-era drama probably isn't a must-see for a lot of people, but there really is so much great filmmaking presented in this picture. I think that most audiences will be more pleased with this film than they expect.

The studio did not publicize the budget for this film, so I'm not sure how to relate it to this weekend's gross. Other than it's extensive cast, there probably wasn't a ton of money sank into this film though. There's no way to know, but I doubt that regardless of what it was, the studio isn't happy with $9.6MM. Critical reviews have been mixed but overly positive so far. I'll be interested to see what this film does in week two; I'm hoping that good word of mouth propels this to strong gains next weekend.

The only notable milestone I see so far is that it ranked as the ninth-highest opening weekend gross on Box Office Mojo's list of True Crime films. It's not surrounded by the strongest of films, but it's in the top ten, so I guess that's something.

Since nothing else new made it into the top spots, and I'm bored of talking about how unimpressive the other films on this list are, we'll jump right to some milestones.

"Hope Springs" broke the $50MM mark this weekend. No known budget for the film, but this was just a character dramedy, so it was surely much less than $50MM. I have little intentions of seeing this film, but that seems like a solid number for them; I would imagine everyone involved with this film is quite pleased with hitting that mark.

"The Avengers" resurfaced in the top fifteen due to a limited re-release over this Labor Day weekend. It only made $1.6MM, but with those totals, did surpass the $1.5BB mark worldwide. It's still not anywhere near "Titanic" or "Avatar" for the top two spots on the All-Tim Domestic and Worldwide lists, but it still has a strong grip on the number three spot, and it should stay like that for a while.

Nothing else in the top fifteen did much, but one film not coming anywhere near that was "Oogieloves In The Big Balloon Adventure". Believe it or not, this film actually got a wide release this weekend, but was met with historically low gains. It takes a special kind of film to open in 2,000+ theaters and only come up with a $448,000 gross. If you're doing that math in your head, that comes out to just over $200 per theater (as perspective, when "The Avengers" released in May, it opened to a theater average of over $47,000 per). And yes, those numbers do put the film in elite class - the $207 it averaged per theater in its opening weekend is good for the second-worst average of all-time (and easily takes the top spot if you look at only the films releasing in as many total theaters as this film did). And if we're just looking at the total weekend gross, of films opening in 2,000+ theaters, this was the lowest overall total EVER. I didn't expect to spend an entire paragraph on this film that no one cares about, but history was made this weekend, ladies and gentlemen. And it deserves our attention.

Okay, enough with that nonsense though. Below are the full numbers this weekend, courtesy of Box Office Mojo: 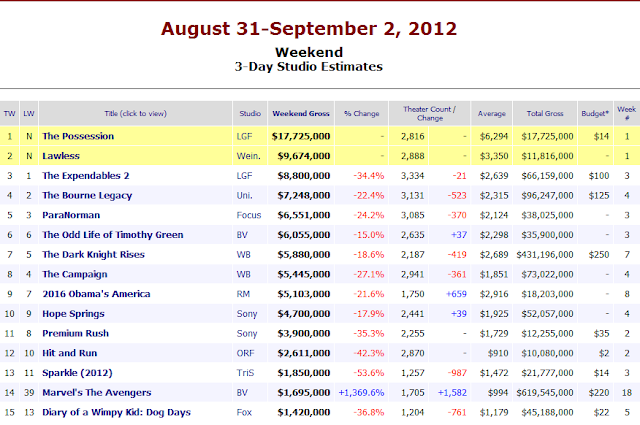