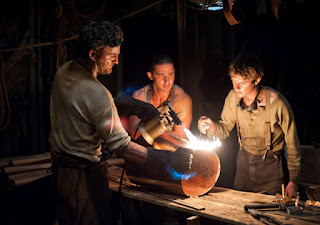 "Lawless" tells the true story of the infamous Bondurant Brothers: bootlegging siblings who made a run for the American Dream in Prohibition-era Virginia. In this gangster tale, inspired by the tales of author Matt Bondurant's family in his novel "The Wettest County in the World", the loyalty of three brothers is put to the test against the backdrop of the nation's most notorious crime wave. They're met with various obstacles, as the stakes get higher with every passing day. But bound by their stubbornness and pride, they refuse to give in to the new ways, and are determined to run their business how they see fit.

The film tells an interesting tale from one of the more dramatic eras in our young country's history. It definitely packs a mighty punch though, so if you're up for it, I highly recommend coming along for this ride.

John Hillcoat directed the film, and as I mentioned in an earlier post, his last notable title in my eyes was "The Road". I loved the imagery and tones he displayed in that film. The bleakness felt very real and looked very authentic. Those were the exact aspects that I hoped he would bring to this picture, and for my money, he did. The setting obviously wasn't as depleted as a post-apocalyptic universe, but still, the the rural south during the 1930's wasn't a whole lot brighter. Hillcoat did a great job depicting this era and providing a vast array of details that made me really feel like I was a part of this. And as much as I enjoy films that take place during this time, the problem many times is that I feel like I'm just watching a History Channel special or something. This felt much more genuine to me, and I loved the way everything was presented.

Even with this wonderful world that Hillcoat created for us to live in, it all means very little without great performances from your various actors. Well no worries here, as this aspect was easily the strongest of the film in my opinion. Of the various actors and actresses listed above, and even a handful of others, they were all fantastic. Hardy, Clarke and LaBeouf played the three Bondurant brothers, fighting to keep their business alive through the changes taking place in the country. They're all great, and each take on very distinct personalities for the family. Hardy is our surrogate patriarch here, who feels he's invincible; he thinks that no matter the situation, the outcome will always be the same - with him on top. Clarke plays the eldest brother who doesn't have much to say throughout the film, but he believes in his brothers. He's more of the brute who's always drunk enough to take on anyone. And LaBeouf plays the baby brother who still has a few too many optimistic outlooks on the world. His character actually embodies a youthful foolishness, trying so hard to be seen as an equal in his brothers' eyes. But throughout the film, he never quite figures out what it means to be tough, usually overcompensating with arrogance or flashiness. His brothers aren't keen to his styles, and as hard as he tries, he rarely ever does the right thing.

It isn't much of a surprise, but the subtle tones to Hardy's very deep character was the standout of the already strong three. His persistence, loyalties, toughness, and even softness all show through equally, and unfold as this man well aware of the world around him. He doesn't inflict a lot of the violence, but he is a menacing character that controls his family and the people around him; he's the unquestioned leader, striking fear into those around him.

Local authorities aren't too much of an issue, and for the right price, are as much on your side as anyone else. But when the big city starts catching wind of all of the alcohol trafficking in this little county, they decide to send in a specialist to clean it up. Enter Guy Pearce. I didn't know what to expect from him in this role from the weird imagery I had seen of his character in photos and trailers, but he actually amounted to one of the best movie villains I've seen this year. His slimy, smug, cocky attitude was repulsive, and it was so easy to hate him. His cowardliness and ruthlessness was such a gutless combination, and the way he inflicted pain on his victims was pathetic. Very infrequently does a villain manage to get me riled up, but for example, in his first encounter with LaBeouf's character, I wished I was in the film and was able to combat him. It made for a great conflict though, and made the eventual climax of the film that much more satisfying. You could tell that Pearce really let go with this character and just let it happen. It amounted in a very strange and over-the-top character, but it worked. I've thought it for years, but Guy Pearce needs to be more of a star. Why isn't this happening?

With the cast at hand, I had a certain level of expectation there, so while the performances were impressive, they weren't unexpected. Where this film truly surprised me was in the violence department. I figured since it had an R-rating and it took place in an era where men settled their conflicts with guns there would be violence; but the graphic nature of some of it was very impressive. I loved it! It wasn't constant or vulgarly gratuitous or anything, but a few scenes really made me wince and caught me off guard. There was plenty of blood here, and if you thought since this was a big Hollywood production they might tone it down a bit, you'd be mistaken. It's brutal and raw, and again, helped to make the film feel more natural and realistic than any glossy interpretation I've seen in the past. If you want a film with some great bloodshed, you'll be pleased with the outcome here.

The soundtrack seemed to work really well for the film too, and even as I'm writing this I'm listening to various excerpts from the film. It's all perfect for the tones of the film, but specifically, the song that kicks in when the film opens had me instantly hooked. It's silly and exaggerative to state, but that opening moment is almost a good enough reason in itself to check out the film; one of the best openings I've seen in a film all year, even as simplistic as it was.

The themes in the film aren't anything too abstract or complicated, mostly revolving around (as stated above) loyalty and pride. It's an interesting look at reverse-roles though, as our "heroes" are breaking the law, selling moonshine at a time when such an act was illegal in the country. But then we add our lawman, who's even more ruthless and heartless than the Bondurant brothers. On paper he is the law, but in his actions, he's an immoral man who doesn't deserve an ounce of the respect his title demands. You're happily rooting for the criminals, while wanting the law enforcers to meet their demise. It doesn't hurt that the act occurring is one that isn't "illegal" anymore, so most of us probably don't consider it too offensive of a crime to begin with. Nonetheless, the era does create for an interesting viewpoint on what we see as "right" and "wrong".

Overall, the film provided a great experience, and one that I'll probably be going back to the theater for again. But that being said, there's still something about it didn't quite click; something that left me feeling like there was something just off that will keep this from being more of a lasting film. I feel like I loved every individual aspect of the film, but something was missing from its core. Maybe I'll find it when I go back and watch it again, but maybe there were just too many pieces moving here for everything to intricately meld together. There's hardly a moment in the entire film where I feel like something should have been changed, and scene after scene impressed me, but I can't help but shake some minor feeling I was left with inside after the film ended. I enjoyed the experience, and I think it's one of my favorite films of the year so far, but I don't get the feeling it will stand the test of time. Maybe it doesn't need to, but maybe I just enjoyed it so much that I'm trying hard to find reason for it to. It was a thrilling and brutal ride though, with so many different enjoyable aspects. I think everyone should find the time for a theater visit with this one. It's definitely a great way to spend two hours in a movie theater. 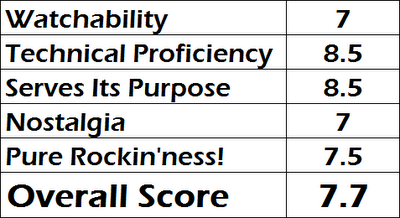