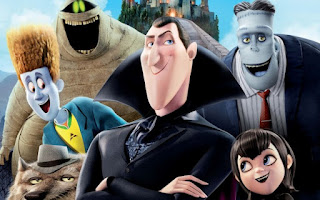 Well I guess all that was needed to jump-start the stagnant box office totals was a good ol' Adam Sandler animated comedy. I personally wouldn't have thought this would be the film to do it, as I've sen numerous titles over the past month that were seemingly more effectual, but even with a less-than-shining track record over the past decade, you can't deny the draw that Sandler still has on the box office. With it's record-setting September opening weekend, the animated vampire comedy blew away all projections and estimates, reigniting the spark missing in theaters over the past few months.

The number two film this weekend, "Looper", stayed pretty close to estimates and still managed a decent take for the type of film it is. Going into the weekend it seemed there was a chance it could contend for the top spot, but with Transylvania's monstrous performance, there was no matching it.

Many, and myself included, expected "Hotel Transylvania" to be in the $20MM-$25MM range, right alongside "Looper" as the two top films this weekend. "Looper" did its part, but "Hotel Transylvania" did not. The film decided to forget estimates and instead set a new opening weekend record for the month of September. Granted, this is traditionally a very weak month, but even still, with its $43MM total, it shattered the record by nearly $8MM. You don't want to give too much credit here, knowing that the previous record holder was 2002's "Sweet Home Alabama", a film that doesn't deserve any type of box office record to begin with, but even still, coming out and doubling expectations in traditionally the hardest month of the year to make money was impressive. This is also the best opening ever for a Sony animated feature as well, though the studio has only been producing them over the past six years. Its $43MM tops previous films like "Cloudy With a Chance of Meatballs" and "Open Season" though - both films with higher budgets than this one. Transylvania is already more than halfway to its $85MM budget, and shouldn't have many problems getting there at this point. As the strongest opening ever for Sony Animated, and the best ever opening by a film in September, this surely outdid even the best-case projections the studio had for the film.

The film only has a 42% on Rotten Tomatoes, but that stat must have been good enough to get bodies in the seats. And as I stated in the Weekend Releases post, parents were surely yearning for something new to take their kids to, and this one just happened to come around at the right time. Good for it for taking advantage of the situation it was put in and pulling in some great totals.

In second this weekend was another new release, "Looper". I saw this movie and thought it was one of the best movies of the year. After watching it though, it's clear that this is a pure sci-fi film that will struggle to find a lot of footing in multiplexes. But the $21.2MM it did earn this weekend was very respectable, and I'm just happy to see that it didn't fall flat on its face like last weekend's sci-fi feature, "Dredd". With a budget of only $30MM, the film will make all of that back and more by next week, so there aren't any worries on that front. I am glad to see that and I hope it's enough to propel writer and director Rian Johnson to the next level.

The film has a very impressive 93% on Rotten Tomatoes, and even I gave the film one of the highest ratings I've ever given a film. The film didn't top any advanced lists that Box Office Mojo has listed for the film, but did manage to grab top ten spots in most areas, including Futuristic, Time Travel, Crime Time, Sci-Fi Chase, Mindbender, etc. It still didn't have the strength to overpower the likes of "Inception", "Minority Report", "I, Robot", or "Terminator 2: Judgment Day", but it's at least in the same ballpark.

I'm looking forward to seeing what word of mouth holds for this film in its second weekend. I hope it has some good legs and is able to stick around for a while.

As we round out the top five, we turn our attentions all to films released last week. "End of Watch", "Trouble With the Curve", and "House at the End of the Street" claimed spots three through five, respectively, and all held on for pretty respectable drops. "End of the Watch" did end up nabbing the top spot last weekend, and it was nice to see it stay on top of the week-two films again here. With $8MM, that now puts its total gross at just over $26MM, well beyond the $7MM budget the film carries. I still haven't been able to get to this one yet, but I'm really looking forward to it. It's reviewed incredibly well, and everything I've heard from people I trust has been great. I'm glad it's getting the kind of attention it deserves in theaters.

I did see "Trouble With the Curve" last week, and it wasn't too bad. Rotten Tomatoes reviews have generally agreed with me, putting this one somewhere in the middle. With the smallest percentage drop this week though (38.1%), it still managed $7.5MM, and has a lifetime gross of $23.7MM. The film came in third last weekend, but it was nice to see it leapfrog "House at the End of the Street", which reviewed terribly, and probably didn't deserve the attention it got, regardless of Jennifer Lawrence's inclusion. The film made $7.1MM this weekend, bringing its two-week gross to $22MM. This one only had a budget of $10MM, so even if this film flops from here on out, it's already more than doubled its money, and the studio can't have too many more concerns at this point.

"Pitch Perfect" looks to be the big surprise this weekend, as even though it only opened in 335 theaters, it still managed a total gross of $5.2MM, good for more than $15K per theater. Releasing in over 300 theaters doesn't count as an official "limited release", but even still, as strong as $15K is, it still doesn't hold a flame to the $147K that "The Master" managed two weeks ago. Even so, I didn't expect much from this film this weekend, so the $5MM it made, nabbing sixth place, is impressive. The film has a $17MM budget, so already grabbing $5MM of it in its "limited" release is a great start for the film. We'll see what happens next week as it gets an expansion.

The final new release this weekend was "Won't Back Down". I expected this would make closer to what "Pitch Perfect" made this weekend, but with only $2.7MM, things don't look very good for this title. Finishing in the tenth spot this week, the film has reviewed just about as good as "Resident Evil: Retribution" so far, so that should tell you quite a bit. At least it managed to out-gross "Dredd" though, which sadly had a very rough 63% drop this week, good for only $2.2MM and a finish outside of the top ten. The movie has actually reviewed pretty well for a sci-fi film, so I'm not sure what the deal was here. For some reason, this one just never stuck with audiences. With a $50MM budget, this probably won't ever get there in theaters, now with only $10MM total in its ten-day gross. I wished for better things from this film than it's received.

As for any notable milestones, it doesn't look anything really did anything significant, so we'll just jump right to the full numbers, courtesy of Box Office Mojo: 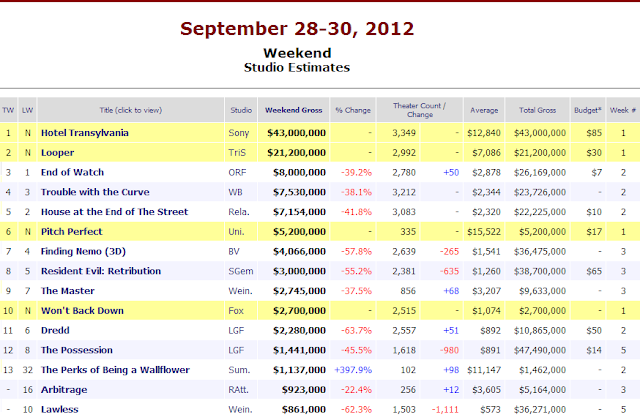