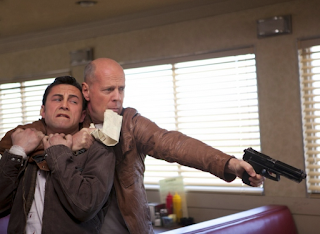 “Looper” is the kind of sci-fi film that makes you leave the theater so full of joy that there are passionate filmmakers out there who are invested in and really care about the genre. The writer and director of the film, Rian Johnson, is a known commodity in this nook of the film world, and coming off such successes as the cerebral “Brick” and sneaky “The Brothers Bloom”, it seemed that with the right pieces, Johnson was primed to catapult to an entirely new level. And with “Looper”, only his third film and first getting a national release, it feels like he might have taken that big next step. With his intelligent writing and noir-style directing, Johnson joins a class of modern, sophisticated sci-fi writers and directors that includes the likes of Christopher Nolan and J.J. Abrams. The craftsmanship displayed in “Looper" is solid on all levels, and it now seems only a matter of time before Johnson gets his own “The Dark Knight” or “Star Trek” to play with.

“Looper” is a futuristic, action thriller, in a universe where time travel has been invented, but is illegal and only available on the black market. Its only use we see in the film is that from the mob. In the future, due to tracking devices and chip implantation, it’s nearly impossible to get rid of a body when you need to. So when the mob needs to clean up a mess, they send the target 30 years into the past, where a "looper" - a hired gun and our main character, Joe (Joseph Gordon-Levitt) - is waiting to mop up. Getting rid of a body before it exists, and for the looper, taking out a person who doesn't yet exist is as tidy as it gets.

Joe is getting rich and life is good. With no real commitments or ties to anything but his job, he’s living a life full of wealth, drugs and women. Things are just fine until the day comes where the mob decides to "close the loop” on him, sending back Joe's future self (Bruce Willis) for assassination. But when his future-self escapes, the past and future are constantly altered and realigning, making for a chess game of sorts between the two, both struggling for their lives – both from each other and the powerful mob members out to clean up the mess.

The overall plot and progression is a major highlight of the film, and the script is so fine-tuned and smartly written that it’s hard to find many holes in the story, even one as complex as time travel. And to that specific point, Johnson did a fantastic job of setting up this universe and presenting time travel in a way that was not only thoroughly intricate, but also accessible to the common viewer. One of my favorite scenes in the film details Willis’ character proclaiming that they could make charts and diagrams all day long going in circles about how it all works, but it would take all day and the same questions would still exist. He says it’s a fact, it happens and he doesn't like thinking about it. This felt like a humorous nod to the audience; an audience that has probably seen its fair share of time travel concepts explained on the big screen plenty of times before - and most with little success. For a lesser director, you might consider this the easy way out. But for Johnson, someone who I'm confident spent countless hours behind the scenes working out the logistics, it’s met knowing that he included this as to not worry the audience with the details he probably already so vividly constructed. It serves as a pressure valve for us to simply absorb and enjoy the film.

Quite possibly my favorite aspect of the film is its cinematography. The imagery of the film is excellent, and I feel that every shot has something beautiful to offer. While much of the film is spent in the city, there are parts that take place in farm country. And those might be my favorite. I hate to do it, but I can’t help but reference Star Wars, and Luke’s home of Tatooine. The settings feel very similar, and something about this style of sci-fi is very comfortable for me. It’s still cornfields and old barns, but there are also futuristic gadgets and technologies around. Something about the juxtaposition between the two things really entertains me.

Beyond the science fiction elements of the film, there are some equally amazing moments showcasing humanity and connection. Science fiction is our vessel here, but the heart of the film still comes down to what we believe In and who we're fighting for. Our characters are interacting on a personal level, but knowing the grander scheme of their actions, it plays out much bigger than that. It doesn't allow itself to get over-complicated with the butterfly effect theory, simply shows us our choices and how they can affect our future. And with characters who have a very real knowledge of this, seeing the lengths each of them would go to protect the things they’re fighting for – love, loss, redemption, sacrifice – it feels very down-to-earth. Even in a future with time travel and flying motorcycles. And though some of those themes might not seem like a big deal, seeing them presented in a science-fiction film - one that has genuine love for its characters - feels like a rarity. There’s more heart here than you’d expect in a genre flick like this, but the addition is definitely what helps this one rise to a higher level.

Tonally, the film played well, never feeling like it was struggling to get anywhere. I enjoyed that Johnson had no fears in slowing the picture down every now and then and letting the characters breathe and collect themselves - something that seems risky given the nature of most audiences today, seemingly needing a non-stop thrill ride in order to sit through an entire film. There is a portion of the film where Gordon-Levitt's character is holed-up on the farm, and I expect many will find the slower pace and lack of action a veer from the perfect action levels laid out in the first act of the film; but for me, I enjoyed the calm, and this is where we see this character understand everything that everyone has been fighting for in the entire film. It's a necessary moment for the development of the plot, and one that I'm satisfied with. But even with the more nuanced pace, Johnson doesn't skimp on the action. Over the course of the film, Willis' character is running around in the city, and there's more than enough to keep the blood pumping. Guns are still the weapon of choice, and they’re used often. There's even a great shoot-em-up scene in the final act of the film that feels akin to some of his 80's and 90’s action forays. Still, the tonal shift towards the second half of the film is noticeable, and for the wrong viewer, could be seen as a miss.

Overall, for me, the film is exciting in almost every facet from start to finish. The characters are great and provide much more depth than I would normally expect from a gritty sci-fi entry such as this. Don’t be mistaken, this is a very traditional science-fiction film, so there are moments with, shall we say, dry tones. But if you can appreciate the classic nature the film, there never feels like a dull moment. The imagery and stylings feel very much ripped from the pages of “Blade Runner” and “Alien”, and it’s refreshing to see such a balance between new and old. I have no desire to compare this newest installment to anything either of those films accomplished, but already it feels like similar sci-fi magic was made.

Flat out, this was one of the best pure sci-fi adventures I've witnessed in years, and I'm genuinely unable to think of the last one that inspired me so much. It’s traditional science fiction, but there is also warmth and humor that I don’t recall feeling with many other entries from this genre. So far I've only seen “Looper” once, so we’ll have to see how it holds up over time, but I can guarantee that I will be going back sooner than later. Regardless, I don’t expect this one will soon fade from sci-fi relevancy. 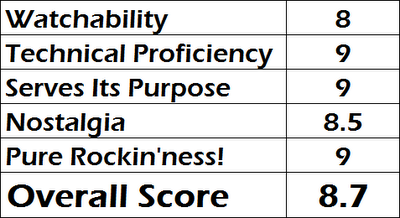