Posted by Unknown on August 04, 2012
For this week's edition of the Top 5 Movie Guide, in theme with this weekend's "Total Recall", we delve into some of our favorite all-time Remakes and Re-Imaginings. There's a fine line between those, but they both offer similar outcomes. A remake is more about introducing a story to a new audience, where plot and character definitions remain the same, but are updated with modern technology and actors. A re-imagining is more of a reboot of the franchise, changing around major plot elements, while still providing similar characters and conflicts. Both of these are married together and when film franchises decide to go the reboot route, it's generally more of a mixture between these two very vague definitions than anything. 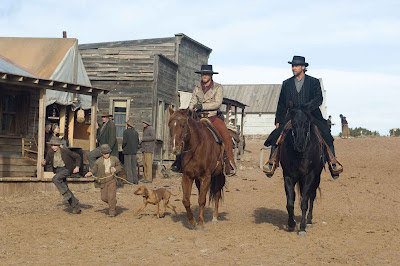 After seeing "Total Recall" yesterday, it has qualities of each, though probably falling more into the Re-Imagining category. But either way, general audiences probably aren't going to know or care about the slight differences between each, so for the lists below, we've grouped everything together, completely uninterested in defining selections as remakes or re-imaginings.

And for as much as it seems that reboots have been flooding Hollywood in recent years, the truth is that since the creation of the medium, studios have been fans of the idea. In fact, when filmmakers were first starting to introduce narrative to their projects, a movie in 1903 titled "The Great Train Robbery" was such a hit that it was remade by studios one year later. Since then the reboot has been a staple of the industry.

None of our lists below feature the 1904 version of "The Great Train Robbery" (SPOILER), but there are still plenty of great selections referenced. So hit the jump for each one of them!

Alex Schopp -
I want to note that outside of my #3 selection, I haven't seen any of the original films that these selections were adapted from. Don't consider these comparisons to the originals, but more as stand alone films that are quality projects spawned from previous film material.

I really didn't expect going in that this was going to be my top selection. I guess maybe focusing on it a few weeks ago for our Cold Weather lists put it at the front of my mind. Fantastic monster flick though, and you all already know my affinities towards John Carpenter.

As much as I love "Tombstone" and "Unforgiven", this Western continues to try and pull away from both of them. This might just about be a perfect film, and it gets better every time I watch it.

I feel like this was a peripheral staple of my childhood. I've always loved Jeff Goldblum, and this was always such an exciting film to watch. And boy is it better than the original version (I know I said I wasn't comparing, but it had to be said).

Western number two making this list. It creeps into my top five all-time favorite Westerns, but is noticeably less powerful than "True Grit". Definitely one of the best from the genre in the past decade or so.

First off, who even knew this was a remake? Tons of great laughs in this film though, and a perfect cast. Also, I rewatched this a little while back and it was a touch darker than I remembered it being. That was a plus.

The film doesn't have amazingly high watchability, but it's still one of my favorite crime/mob movies. In my eyes, you couldn't have picked a more perfect cast. And I'm glad it finally got Marty that Oscar!


Ben Foutch -
I based this list on remakes that can stand on their own as individual films, not crippling under the weight of the original source. Perhaps even, improving upon. I didn't count American remakes of foreign films, or comic franchise reboots (as they aren't really remakes of particular films).

Carpenter's take on this old school sci-fi flick is without a doubt one of the best in his career. Who even remembers the original film after watching this?

The art direction is so damn fantastic. Plus, it's actually kind of touching.

I'm not dissing on the Rat Pack here, but this is a much better film.

This film made the list for the brilliant opening sequence. I don't think it is a better film than the original, but it's more of an adrenaline rush while not tarnishing the legacy.


Derek Clem -
I made it a requirement that I had to have seen the original in order to include the remake. Otherwise, I feel like this list wouldn't hold any weight.

This is one of my top five all-time favorite movies. Really hits hard every time I watch it. Tears galore.

Absolute masterpiece! What makes this film so distinctly different from the original is the progressive cultural perspective the audience has. Both a new and very different generation of eyes taking in the subject matter and the exceptional craftsmanship make this movie great. It's an interesting study on the evolution of American culture told not only by what's on screen but also through the viewers of the movie. Able to find it's unique voice while still being a remake.

Cronenberg definitely takes his version to the next level...and takes our emotions to the next level for that matter. Who knew you could ever feel so sad for something that disgustingly ugly?

This was the first R-rated movie I saw in the theater, and if you don't count "Monster Squad", my first Horror film in theaters too.

It was a toss up between this and "True Grit". This ultimately won due to it's watchability factor.

High respect for Gus Van Sant having the balls to even attempt such a thing.


Nathan Hinds -
I decided to go with films where I had seen the original as well as the remake. That criteria didn't leave me a lot to choose from unfortunately, but I had enough to at least be comfortable sticking to it.

My favorite western behind "Tombstone". This movie is also far better than the original.

I feel like Peter Jackson needs to make all of his movies over three hours long - not that his films shorter than that aren't good, but when he crosses that three hour mark, magic always happens.

While a lot of people may not appreciate this film, I will argue that it is one of the best Vampire Movies ever.

The gap between this and its original film is a lot closer than with "3:10 To Yuma", but just like that film, I'll take the remake.

I haven't seen this movie since I was a kid, and I feel like it probably wouldn't hold up well now, but it was always a staple at our house around Christmas time back in the day.

One of my favorite movies of all-time (unofficially). I love how the characters interact in this and I really love the way the movie ends!

I actually enjoy this one more than the original. It hits on all the same sociological points without dragging forever. Barbara sucks WAAAY less in this version of the movie.

I used to watch this movie all the time; this is such a funny movie! So underrated!

Great, great western movie full of great actors and with an incredible story!

This may need a tiny wee bit of explaining, but it actually IS a remake. The original that it's based off of is called "Exorcist: Dominion". The film failed and didn't test well with studios so they spent millions of dollars and waited a year then remade the entire film using most of the same actors. Both I think are worth watching.


So that's what we're looking at this week. It always makes for such a fun post when we get to focus on a really broad and quality category. Sixteen different films were featured this week, which was a few short of the most ever, but is still a a really nice amount. With that number of films there were only a handful of films that rose above the rest as the more popular selections. Your big winner this week is "The Fly", appearing on four of the five lists. This David Cronenberg sci-fi classic has long been loved by fans of the genre and doesn't provide much of a surprise as one of most selected films this week. If by chance you never gave this film a chance, it's definitely worth a watch, whether you're trying to dig into this remake filmography or not. "3:10 to Yuma" also notched a top spot, with three selections, and the only film which had as many. This western, starring Russell Crowe and Christian Bale, provided audiences with a great modern installment for the genre, and one of the more notable film remakes in the past fifteen years.

Four different films had two selections, and represented the only others with multiple picks: "True Grit", "The Thing", "Dawn of the Dead", and "King Kong". I'm not sure you could put a more eclectic group of four films together if you tried. Each one of these is so unique and should offer fans looking to upgrade their remake knowledge some quality selections.

As always, we hope that each of these selections helps you to expand your knowledge and appreciation of some of the best films this genre has to offer, and guides you to better and more enjoyable all-around viewing experiences.