Posted by Unknown on July 14, 2012
There isn't a very wide variety of films releasing this weekend, so we had to try and be creative for our genre this weekend. "Ice Age: Continental Drift" is the big movie opening up across theaters, but we've already done a couple of different animated films lists, so we didn't want to go down that path again just quite yet. Instead, we decided to focus on the setting of this move. The film is titled Ice Age, and though not every scene of every film takes place amongst snow and glaciers, it generally is a big aspect to the films. So we decided, animation aside, to compile some of our other favorites that really make a point to include the weather in their stories; thus, our Top 5 Cold Weather Influenced Movies! 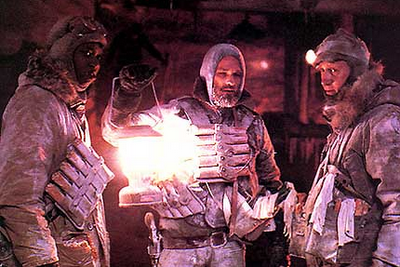 There were a few different directions we could take with these lists, and each writer will probably outline some of their specific criteria below, but overall, the key was to really try to pick films that not only just took place in the cold (though, technically we decided to accept those if desired), but more so used the cold weather as a character of the film (i.e. the film probably doesn't happen if that weather isn't so bad). So because of that, I think most of us focused much more on the survival aspect of weather, but there are still a few films below that are just powerful works where the snow and freezing cold temperatures are notable in the film, even if not threatening.

But anyway, not much else to detail for this list; I recommend just hitting the jump and checking out each of the films for yourself!


Alex Schopp -
There were a lot of great films that I wanted to include in this list, but ultimately, I tried to narrow it down by really focusing on films where the weather was almost an antagonist; where the conditions played a part in the development and direction of the story.

Even though things don't all go as planned, if you were ever looking for motivation to go live in the wild for a bit, this film is it. I want to experience most of the things these guys do. Also, the relationship between Hopkins and Baldwin is solid.

One of the best John Carpenter movies that I feel like I get very little chance to ever talk about. Kurt Russell is fantastic as the lead character here, the music score is amazing, and the practical effects are top-notch! Definitely a great 80's monster flick!

This film surprised me quite a bit. Liam Neeson was fantastic in this role and I loved the depth of his character. This is one of the best movies of the year so far.

We all know this movie. Great acting, incredible tension and ambiance, and a wonderful score. The weather ultimately trapped them in the hotel, but you have to assume, if it wasn't that, it surely would have been something else (the reason it dips a bit on this list).

There are plenty of theories out there as to how long Murray's character was stuck on this day - anywhere from a few months to decades. Some of those thoughts really make this film much deeper than it needs to be. The snow storm keeps them there that night (which is why the film makes the list), but it doesn't have much effect from there on out (why it's #5).


Ben Foutch -
lol. So, apparently Alex, Andy and I were all on the same page.


Scary ghosts, murderous spouse, or death by cold weather. Which would you choose?


What a great film, timeless film!


Bill Murray is so good in this light-hearted, philosophical tale about life.


Probably the best looking Carpenter film. It's immersive scenery and music score are reasons alone to watch this flick. Plus, you can't beat Kurt Russell wielding a blow torch.


I loved the poetic undertones in this film. Awesome survival flick.


Derek Clem -
I know it's Sacrilege for me to not have "Fargo" (1996) on my list. I really can't even explain why it's not there. Just not in the mood for it right now. Had I made this list almost any other day I feel like it would've made the cut. Also, I feel like I need "The Grey" (2012) to simmer a bit more before I consider it for lists. Still a bit too new to know for sure if it's list quality.


A heartwarming affirmation of the can-do American spirit inside us all.


Such a brave and noble dog.


Russell Crowe shows off his acting range by just playing a regular guy.


Before I had actually seen the two films, I thought Fargo was the title of the movie where a soccer team ate people while stranded in the cold.

Honorable Mention: Lost in The Barrens (1990)


Just a nice little inspiring film I had on VHS growing up. two teens battle many hardships while lost in the cold wilderness as they try to find their way home.


Nathan Hinds -
This was tough to find a big pool of films to pull from, so I hope I'm not leaving any off here. For the most part I'm confident in my choices.


If you haven't seen this movie, go watch it immediately. This is one of those movies that anybody who isn't a terrible person should be able to watch and like. Too harsh, I don't think so.


What's worse than getting torn to pieces by the scariest vampires ever (in my opinion)? The fact that you're also freezing cold, and in the dark on top of it. This is one of my all-time favorite horror movies.


I know it's really soon to put a movie like this on the list but I'm fully confident it will stay here. This movie blew me away. It was such a powerful film, and some of Liam Neeson's best work.


I would hate to be in any of these peoples' situations, but boy is it fun to watch all the chaos. There is an especially memorable wood-chipper scene.


For coming out in '82, this movie's special effects are really solid. Plus I love that the film had Kurt Russel in it, because it got me comfortable since those 80's action movie guys almost never died and I figured he would save the day like all the other movies. But then when you find out that everyone could be an alien, it snatches you right out of that comfort zone.


Such and awesome tale of survival and betrayal! It made me want to rough it out in the wilderness for a bit, although the entire point of the movie is that you could die in an instant if you aren't prepared for whats out there.


Just like "The Edge" but more modern and with wolves instead of a man-eating bear. Also, there is a pretty amazing sub plot about humanity love, loss and religion. Do we just keep going or do we give up? We run straight at our fears and don't flinch or they will eat us alive!


I know what being a completely insane person would be like. It would be like watching this movie. I love it.


THE BEST special effects of all time! I love, love, love, loooooove practical effects when they are used like they are in this movie. CG effects can get out of here when there are things like this!


One of my all-time favorites! It's so darn funny!


So there we have it. Pretty easy to pick out some of the winners with this weekend's list, but I guess when the movies are good, the movies are good. Still a good variety above though, and plenty of different options for all tastes. No film swept all lists, but three did have four selections: "The Thing", "Groundhog Day" (one first-place vote), and "The Grey". "The Grey" seems most surprising because it is so new, but Neeson's character specifically is very layered and there are a lot of great elements working for this film. It hasn't been six months since its release, but if you haven't looked into this one yet, I'd recommend definitely doing so. It's a great survival flick, whether you want to say it's one of the best Cold Weather movies or not. "Groundhog Day" and "The Thing" probably don't require much explanation because I feel like they're pretty regular staples of the genre. The first is a comedy, while the second is a monster horror/thriller. Both very different films, but classics in whichever genre you're speaking about. These are both must-sees for sure.

Otherwise, we had two films that that showed up on three of the five lists, "The Shining" (one first-place selection) and "The Edge" (two first-place selections). "The Shining" is probably much more known here, and I hope that all of you have already seen Stanley Kubrick's classic horror tale. "The Edge" is a fantastic survival film that's not quite as flashy as some of these other films, but powerful nonetheless. If you have interest in outdoor survival check this one out - it will equally want to make you never have to experience that and also want to leave today. A great film with a great cast.

But outside of those five films, everything else was a solo selection today. So plenty of other options to go with, but still pretty clear movements as to what some of the best that this genre has to offer are.


As always though, we hope that each of these selections helps you to expand your knowledge and appreciation of some of the best films this genre has to offer, and guides you to better and more enjoyable all-around viewing experiences.