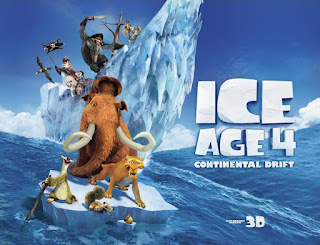 As we round second base in June, we're starting to see a good amount of movies ready to step up to bat for July. One the those movies, which I'd like to see get a little more love, is "Ice Age: Continental Drift". I think that this entire series has been great over the years; consistently funny and well-animated. This is the fourth film for the franchise, and looks just as well-crafted as any previous.

Sometimes we loose sight of the films about to make their theater release because of the films that are currently out in theaters. With all the spectacle of movies still hanging around like "The Avengers" or "Prometheus", we lose sight of what's still on the horizon. Well I'm here to say: Fear NOT! In the second installment of this new series, I aim to shed a little light on another movie that's surely to show up on some radars in the coming weeks.

For all the coverage on a film that should be full of laughs and prehistorically good times, hit the jump!

If by chance you're still unfamiliar with this film, here's the official synopsis:


Scrat's acorn obsession sparks a continental catastrophe that sends Manny (voice ofRay Romano), Diego (voice of Denis Leary), and Sid (voice of John Leguizamo) on an epic adventure involving a ship full of fearsome pirates, and an unexpected reunion as the Ice Age saga continues in this eye-popping sequel. Queen Latifah, Seann William Scott, and Josh Peck reprise their roles, with Jeremy Renner, Jennifer Lopez, and Aziz Ansari heading up the rest of the voice cast.

That synopsis assumes that you're familiar with the previous installments of this franchise. I believe it's a safe assumption as well. Other than the setting, peripheral characters, and basic focus of the plot, not much has changed along the way. We've been able to keep the same core voice cast together, and all four films center around these same three characters off on another set of adventures.

Critics have had mixed opinions on the franchise thus far, but there's no doubting the fan appreciation across the board. Each of the previous three films has made nearly $200MM domestically in total box office grosses, and actually with more in each subsequent film. And the numbers get absurd once we take a look at international box office numbers: "Ice Age": $206MM; "Ice Age 2: The Meltdown": $460MM; "Ice Age 3: Dawn of the Dinosaurs": $690MM. And for three films that have each had budgets of less than $100MM, those are pretty amazing numbers.


Even more exciting, this newest film looks like it has the potential to be the best one yet. The newest trailer was released just a few weeks ago, and already has critics and fans alike anticipating the film's release. For your reference and entertainmaint, check out the trailer below:


It looks like there are a lot of great laughs in there to me, and even though it's animated, I like the scope of this installment, broadening the amount and variety of characters and locations present. From the looks of it, John Leguizamo steals the show here. While we only have a two-minute trailer to base anything around thus far, his comedy seems clever and fresh (that last scene alone made me actually laugh aloud).

Fans of the franchise will point to Scrat as the slapstick comedy-relief of the series, as he's received multiple short films himself, and been the highlight of many of the marketing campaigns from 20th Century Fox. In fact, let's jump right back to another video with this clever little featurette from the studio, which plays on the popularity and success of last year's Best Picture winner, "The Artist". In this video, aptly titled "The Scratist", Scrat's never-ending quest for the acorn is highlighted in form similar to "The Artist". I enjoy the fun the studio is having with this film, and even if the younger audiences aren't familiar with what's happening here, it's surely something us adults can appreciate.

As you're probably aware, the film has a July 13, 2012 release date. The film actually has plans to headline the 42nd Giffoni Film Festival in Italy beginning on July 14. The festival, aimed more at children and family films, will also feature titles such as "Madagascar 3: Europe's Most Wanted", "LOL", and "Struck by Lightening". Among the American guests scheduled to attend are Jessica Alba and Jean Reno. 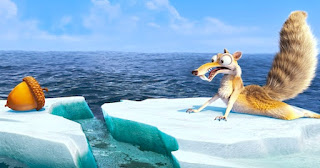 Overall, it's pretty easy to see the positives that this film can offer. Other than the light-hearted and easily-to-absorb comedy, the quality of the animation looks wonderful. This really looks like it's taken a big step since its last installment (which was already strong), to really offer something beautiful here. The colors look incredibly vibrant and clean. I would say that if you get a chance at this in IMAX or any other state-of-the-art theater, that's the place to watch it. If you're going to give this one a chance at some point anyway, it might as well be in front of a huge, bright screen, with an amazing sound system. This film was made for that venue, and I really think it will be an enjoyable experience, regardless of your age.
In-Anticipation