While it wasn't in very surprising fashion, for the first time in a month, "The Dark Knight Rises" does not sit atop the weekend box office charts. As is always the case with every film, "The Dark Knight Rises" has slowly been phasing itself out of the top spot, and with two new films with as much interest behind them as there is/was, it was widely accepted that we would see Batman's reign end this weekend.
Outside of that though, the box office really did go pretty much as I expected. Other than "Diary of a Wimpy Kid: Dog Days" out-grossing "Total Recall" by $100,000 and nabbing the #5 slot, everything else was pretty much dead on.

As expected, "The Bourne Legacy" managed to grab the top spot this weekend. It collected a respectable $40.2MM. The film hasn't yet released internationally, so there aren't any numbers on that side of things. And as will be the case with most of these August blockbusters, they'll take the top spot in their opening weekend, but they're not competing with any of the numbers that were established by any of the big boys earlier in the summer. $40MM seems acceptable, even for a $125MM budget. I'm not sure what the international plans are for the film, but the previous three films in the franchise made at least $90MM overseas, with Ultimatum all the way up to $215MM. There will be a drop-off for the lack of Matt Damon's face on the front of this poster, but the fact that "Bourne" is still there will surely bring back a good number of fans.
In the second spot this weekend was the political comedy, "The Campaign". The film has been reviewing well, and it seemed that this film would make for a marginal hit, even if it isn't able to sustain much success. Nonetheless, it did make $27.4MM this weekend, which is good for already more than half of it's estimated budget of $56MM (though that number isn't officially noted anywhere for the film). Again, no international numbers yet for this one, and unless it gets some minor releases in the UK or something, I don't expect much to ever come from the international box office for this one. It shouldn't be a problem though, as the film looks to cruise past that $56MM mark in the next couple of weeks.
The reviews have dropped a bit since Thursday, but it currently still sits at a 67% on Rotten Tomatoes, which is pretty strong for a comedy. The feedback I've heard back has been positive even if not overwhelming. Our own Ben Foutch reviewed the film earlier this weekend, and you can read his thoughts here. Who knows if it will ever ultimately sit atop this list, but of the films that Box Office Mojo labels as Political Satires, it is definitely worth noting that "The Campaign" had the best opening of any of them. There isn't a lot of wide-appeal for most of these, but it did edge out "Fahrenheit 9/11" ($23.9MM) for the top spot. We'll see what kind of legs this will have, but already, it seems like this film is going in all of the right directions, regardless of your thoughts on the comedy or execution of the film.
Moving down the line we next get to our previous champ, "The Dark Knight Rises". What else can we say about this film that hasn't already been said? The film racked up another $19.5MM this weekend, bringing its all-time domestic gross up to $390MM. It's grossed pretty similarly overseas, now with international grosses of $378MM, bringing its worldwide total up to $768MM. Believe it or not, that still puts it way down at #40 on the All-Time Worldwide list, though it did move ahead of "Ice Age: Continental Drift" with this weekend's totals. On the purely domestic side of things, it's looking a little stronger, and has now moved into the #15 spot, now just behind "Transformers: Revenge of the Fallen". It doesn't look like it's going to come close to reaching numbers established by "The Dark Knight", but at the end of the day, when you have two films inside of the top 10, you're not doing too bad (only James Cameron with two films in the top TWO can really say anything else on the matter).

Right along to the number four film this week, another new release, "Hope Springs". As was the case with all of the films above, the $15.6MM was just about what we expected this weekend. The film officially got its release this past Wednesday, so there was a bit of a head-start for the film. With its extra couple of days, its overall total currently sits at $20MM. I don't have any budget projections for this film, but I can't imagine it's anything too high, maybe in the $30MM range? Whatever it is, I would imagine that by this time next week it will have surpassed it. The film has reviewed well, and should continue to pull in adult audiences for the next few weeks. Don't expect any international grosses to come from this film, but anything surpassing $50MM domestically will be seen as a big hit for the film.
That brings us to the fifth spot this weekend, where less impressively for "Diary of a Wimpy Kid: Dog Days" it's much more embarrassing for "Total Recall" that it could not hold this place. We'll start with Wimpy Kid, because good for that film for finding its niche and again being able to produce a film of interest for that crowd. The film made an estimated $8.2MM this weekend, bringing its domestic totals up to $30.5MM. I expect that by the time all is said and done the film will end up in the $50MM range, which is what these films shoot for. Currently, it's already surpassed its budget of $22MM, so there's not much concern for such. This movie did exactly what it was supposed to do, but nothing much more.
The same cannot be said for "Total Recall" however, which only managed to put together $8.1MM this weekend. These numbers may change slightly tomorrow when the actuals are recorded, but for now, this film suffered another massive defeat. Through a full ten days now, the film is only at $44MM domestically. The film has to pray that its international numbers (currently at $27.5MM) continue to hold up and help the film reach its budget of $125MM. Whatever happens though, this film has definitely been a failure by the studio, and pretty much each of us at this site thought the same. If you want, you can note a general shortcoming by sci-fi remakes in general, as this film already sits at #10 on that very diverse group of films. There's a good chance it will make its way into the top eight, and if you're looking for small victories for the film, that might be about the best we can do. Overall, this isn't anything more than a major flop.
As far as milestones go this week, I don't really see much. "The Dark Knight Rises" will cross the $400MM mark next weekend, which will be cool, but there's nothing seemingly too notable this weekend.
Check out the full numbers below, courtesy of Box Office Mojo: 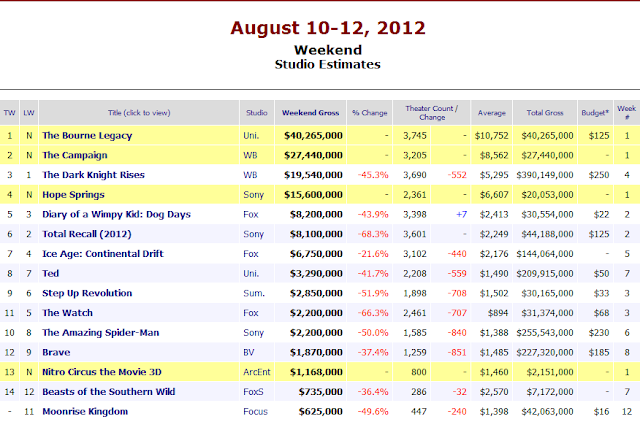