The Slackers' Greatest Movies of All-Time 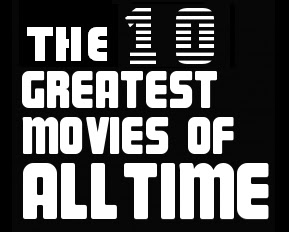 Recently, there's been a lot of discussion floating around the internet on what the Greatest Movies of All-Time should be. I'm not sure if this is what started it, but the post that Film School Rejects first put up is what caught my attention. The purpose of their list was to poll various members of the media, as well as different filmmakers, and see which films they thought to be the greatest. But instead of just polling random people, they kept their focuses on a younger film industry demographic, only polling online movie bloggers and newer directors. And it was because of this that a new trend started to show through; new types of films starting to show up as some of the greatest of all-time.

More than anything, what the conversation has caused debate over is what the term 'Greatest' actually means. How is that word defined? The shift we start to see is that the older generations used the term to define some of the Best films around, while it appears now that it has shifted to be more inline with our Favorites. Ultimately, it looks as if it's more about finding that balance of quality, how much it's meant to the film industry, and overall entertainment.

You can reference our last post that broke down the FSR's list on the topic here, but what this ultimately inspired was for all of us here at the Slackers Selection Movie Blog to come up with our own 10 Greatest Movies of All-Time. We used practically the same rules and points system as the other guys did, and the 10 films with the most points were the ones that made our Top 10.

Check out our compilation list after the break, where you can film the films we deem the Greatest of All-Time!

We'll start with a quick recap on how these films were compiled. First off, each writer (five of us) composed their own Top 10 list. The first question was how we wanted to define Greatest. But that was kind of the fun part - we didn't define it as a group. Kind of the whole point of this exercise was to work backwards and let the films show how we ultimately defined the word. So we each had to figure out what that word meant to us and which films we thought most worthy of being displayed on such a list. The lists were done completely separate from each other and with no discussion or persuasion from any of the other writers. After all of the lists were completed, we totaled them up. The points worked like this: 10 points went to a film that was ranked first, while one point went to a film ranked tenth (and you can figure out how the middle films filled in from there). At that point, it was just a matter of adding them all up and putting them in order; the film with the most points ranking as our number one movie. There were obviously many more films than just these ten that received votes, but we only wanted to display our top 10, as that's been the trend with all of these lists.

So anyway, without further ado, here's what we came up with:


First, with the two films that tied in points, "Star Wars" and "The Shining", what we did is went to each writer and said, between these two films, which would you call "greater". Between us five, "Star Wars" won, three votes to two, so it earned the higher rank.

Otherwise, there weren't any ties, and the list actually turned out really nice. We all really loved the variety of films and different genres that showed through. With the top two films, "The Empire Strikes Back" and "Raiders of the Lost Ark", you can see the overall love and respect we have for that new wave of well-made blockbusters from the late 70's/early 80's. These two films kind of define exactly what we love about film - great technical proficiency, beautiful set and sound, get direction and acting, wonderful storytelling, and high levels watchability. They're the whole package (really, I think that is the theme for this entire list and what we can probably say we define the term Greatest as - different genres and time periods, but films that we felt most had that whole package to offer). And what we loved seeing was that films like "Citizen Kane" and "The Wizard of Oz" didn't end up too far behind those films, proving that good storytelling and technical skill showed strong, regardless of time period (to an extent, of course). You take those two films and add in "It's a Wonderful Life" in the sixth spot, and you have three films making this list from pre-1950 that we collectively thought were within the 10 greatest films of all time. If you've followed our blog or pay attention to our opinions, I hope that you can see that we do have a respect and understanding for classic film. We feel like that doesn't always show through all the time though, and sometimes it seems like we focus a little more on the enjoyability factor of films - especially with newer films. And because of that, we were all really happy to see these three films represented on this list. We're glad we had a platform to show off the appreciation we actually have for some of those films.

"Lord of the Rings: Return of the King" made an appearance as the only post-2000 film on our list. This was a little surprising to some that we only had one film from this time period, but to be a newer movie and make a list like this you really had to do something special. Other than winning 11 Academy Awards, including Best Picture, the film really broke new ground in CG and motion-capture work. It set the bar for newer films like "Avatar" and "Rise of the Planet of the Apes". It's scope was amazing, and the entire design of the film, from landscapes to costumes, was all beautiful.

"E.T.: The Extra-Terrestrial" and another selection from the Star Wars franchise - the first film released from the series - can both be lumped in with the first segment I talked about, being from the same generation of film and hitting on all of the same aspects as those films did, just maybe to a little lesser extent. And though most of us feel that overall "The Empire Strikes Back" is a better all-around story, you can't deny the cultural impact that the first film had on the world. Yes there were blockbusters before this film, but "Star Wars" opened the gates to new levels of marketing, franchising, and memorabilia. If for nothing else, because of that it's worthy of selection on this list.

"The Shining" came in at the nine slot, as the only horror film to make the list. This film is a great representation for the genre, as it kind of hit on everything you want - great atmosphere, great great direction from Stanley Kubrick, and great acting from Jack Nicholson.

"The Shawshank Redemption" rounded out our top 10, and a nice little example of modern, noir-style storytelling. This entire films is laid out beautifully, and we were all happy it made the cut.

Overall, like I said, we were all really happy with how this list turned out, as it displayed a nice, broad spectrum of films. It was a fun exercise to work on and it's nice to see the films that we, as a group, really see as some of the greatest movies around. Remember, these weren't the films we think are the Best, or even necessarily the ones that our are Favorite. This was just an attempt to ponder what the term Greatest stood for. And after compiling our lists, this is what we see of the word.

There were 20+ other films that received votes, so if you think there are films that should have been on here, they probably came close. We could only share our top 10 though, so unfortunately some had to be left off. That being said though, if you were going to compose your own Top 10 list, which films would make the cut for you?
Top 10 List Top 5 Movie Guide