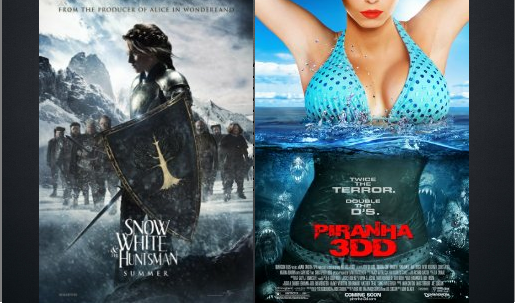 Can you believe it's June already? It seems like just yesterday we were yearning for the summer months to get here. Well, they're here. And in theaters this weekend, we're greeted with one true wide-release and another film that starts its run this weekend, but only opens in handful of cities across the country. Those films are "Snow White and the Huntsman" and "Piranha 3DD", respectively. The first is a big-budget studio adaptation of the classic Snow White storyline. It looks to mix a solid cast with a darker-than-expected tone for the fairy tale. The other is film number two in the remake series from this franchise. While audiences and critics alike applauded the excessive nature of the 2010 film, this one aims to one-up even those extremes.

Both offer very different experiences for film-goers this weekend, but the real question is, are either of these going to be worth your time?

The first film, and possibly only film that will be hitting your area this weekend, is "Snow White and the Huntsman". I've really liked the tones I've been seeing for this film. The first time I saw this trailer I was happy that someone finally went this route with a fairy tale. This is exactly what I want to see from these types of stories! The film stars Charlize Theron, Kristen Stewart, and Chris Hemsworth in the title roles. Though I'm not a huge Kristen Stewart fan, I think she'll be just fine here. Hemsworth has been great since he's come onto the scene and looks pretty good for his role as the Huntsman, though, Charlize Theron looks like she'll steal the show with her portrayal as the evil Queen. We also get a great lineup of actors taking on the roles as the Seven Dwarfs, but much to my chagrin, these characters have gotten absolutely no exposure in the marketing of the film. Either they don't realize the sweetness of this cast, or they're saving the reveal for the theater. If it's the latter, I'm going to ruin everything for you right now. There are actually eight dwarves in this film, but here are a few making appearances as the warriors: Ian McShane, Bob Hoskins, Ray Winstone, Nick Frost, and Toby Jones. That's a great lineup already and we still have three others not mentioned! Why is this film doing everything it can to avoid this group? I want a sweet trailer featuring just these characters and their lives. That would probably get me more excited for the film than anything. Alas, it was not the case though. At least it gives me something to look forward to with the movie itself.

I think the quality all-around will be raised here, but there's still a bit of a Twilight vibe in terms of the audience I feel they're targeting. Because of that, I'm hesitant to think that this film could be as epic as I'm wanting it to be. The trailers look great, but at the end of the day, they're still only that. Trailers. And what's been the most unsettling is the fact that the film had an embargo on reviews until just yesterday. Who knows the real reason as to why, but generally, when a film prohibits critics from speaking about a film until a certain date, it generally seems to be because they have something to hide. So far, it doesn't seem like it's going to have much affect on the film, as it's currently sitting at a very standard 60% on Rotten Tomatoes. Not terrible, but not great either.

Overall, I do plan on checking this film out this weekend. It looks like a great turn on this classic tale, and I'm interested to see how they pull it off. I have my expectations in check though, as I could see this one either really impressing or falling incredibly short. More likely though, it will end up somewhere in the middle and be a generally enjoyable film for the weekend.

The other film this weekend is "Piranha 3DD". This is the sequel to the 2010 film which starred Elizabeth Shue, Ving Rhames, Jerry O'Connell, and Christopher Lloyd. I went to the theater and saw this film and left incredibly entertained. It was full of excessive gore, nudity, and cheesy 3-D gimmicks. That's all it was ever trying to be and it worked. Audiences generally appreciated the film, as it ended its run with an $80MM+ box office gross; numbers that instantly signaled for a sequel with the studio. Rhames and Lloyd return for the follow-up, but otherwise we're met with a full slate of new bodies, including David Koechner, David Hasselhoff, Gary Busey, Paul Sheer, Danielle Panabaker, and Katrina Bowden. This film takes place at a water park this time around, but surely offers most of the same "plot points" as the previous film.

As we pointed out on the last episode of our CinemaCast, though the gimmicks and exploitative nature of the first film landed well with the public, so far, it does not appear that, at least on the critical end of things, the response is going to be nearly as strong this time around. The first film received an impressive score of 73% on Rotten Tomatoes, while the newest installment is sitting at a lowly 17%. Clearly there's a lot less to like with this film.

But as we all know, critic reviews and ratings don't always mean everything. Honestly, if you go to this movie, knowing the kind of thing to expect, you will probably get some entertainment from it. It should be full of sweet death scenes, lots of great cameos, and plenty of 3-D gimmicks (generally, I want to stay away from any type of gimmicks, but for films like this, the more the merrier!). Don't expect them to reinvent the wheel here, but expect ridiculous humor and thrills. I don't think I'll be seeing this film this weekend, but it shouldn't be the worst thing if this is what you opt for.

In terms of the weekend Box Office, "Snow White and the Huntsman" shouldn't have much trouble taking the top spot. I don't expect it will quite reach last weekend's MIB3 numbers, but a strong $50MM-ish gross seems reasonable. That's about half of it's estimated budget, which would be a good start for a film that should get some play overseas as well. Last weekend, "Men in Black III" did $70MM, so half of that, $35MM, seems like a good place to start for week two. Ultimately I think something in the $25MM-$30MM feels more comfortable, but generally, that's around where this one should end up. Two years ago "Piranha 3D" opened with $10MM. With holdovers like "The Avengers", "Battleship", and "Dark Shadows", paired with the poor ratings the film has received so far, I'd imagine the film will be happy to hit the $10MM mark this time around. That still seems like a reasonable opening total though. It should definitely finish in the top five, but I won't be surprised if it coincides with what "Chernobyl Diaries" did last weekend and teeters on that fifth-sixth slot. And speaking of "The Avengers", it should match "The Dark Knight's" all-time numbers before the weekend, so we'll look to see it increase its hold on the third place slot, and further cement itself in box office glory.

Which films will you be checking out this weekend? After you see them, let us know about them in the comments section below!
Weekend Releases