Posted by Unknown on May 30, 2012
With this weekend's release of "Piranha 3DD", we decided to take a stab at our Top 5 Films from actor Gary Busey, one of the stars of the upcoming film. Busey has starred in countless films and television shows, stemming back to the late 1960's. With over 150 acting credits to his name, there was no shortage of content to choose from for these lists. Though never fully breaking out as a leading man, his iconic look and demeanor has provided him a household face and name. 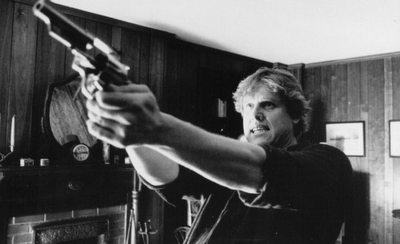 Though we look at Busey only as an actor today, interestingly enough, he originally dropped out of college and moved to L.A. to pursue a music career. Skilled in both drums and the guitar, he was in a variety of different bands, at one point even joining forces with another actor/musician, Kris Kristofferson. He dabbled in television while working on his music, until he received an offer he couldn't pass up - portraying Buddy Holly in 1978 biopic about the musician's life. The film provided Busey the opportunity to show off both of his talents, as he actually played guitar and sang the songs for the film. The film landed Busey his first and only Academy Award nomination, and grabbed the attention of every studio in the business.

Since then, his career hasn't necessarily gone how many would have expected, but nonetheless, he's developed a strong following and put together a massive filmography! Hit the jump to check out which films we have enjoyed the most from this actor's career.

Alex Schopp -
For as much as Gary Busey has to work with, I'm kind of upset with the number of his films I've seen. I think these are all great selections though and should be a good start for anyone wanting to get acquainted with the actor.

Easy number one selection for me here. I've only become familiar with this film over the last couple of years, but it's clear that this is the best thing Busey has ever done. I've always thought he was an interesting actor who did fun movies, but this film showed me that he has some real talent! The film is a great watch with a lot of really good information of Holly's life. If you haven't seen this movie, definitely do so.

Gary Busey, Patrick Swayze, and Keanu Reeves. Just an awesome movie with a great cast. The movie is a lot of fun.

I'm a huge Chicago Cubs fan, so when this movie came out, it was instantly one of my favorite childhood movies. What kid didn't dream of that sort of thing happening to them? Plus the supporting cast of Gary Busey, Daniel Stern, and John Candy is top-notch!

One of the better werewolf movies out there, and another staple of my childhood.

Really interesting movie. It's not completely polished, and some of the acting isn't the greatest, but I'd recommend checking this one out if you never saw it. The film is a dramatization of different events that conceivably could have unfolded one night in the 1950's when all four of these people - Marilyn Monroe, Albert Einstein, Joe DiMaggio, and Joseph McCarthy - stayed in the same hotel (that event is factual, the meetings between them is just conjecture).

This is a pure nostalgia pick. Wore out my VHS version of this film.

Memorable performance, and a formidable villain.

Easily one of the best Seagal films. Busey gives another great villainous performance.


Derek Clem -
I feel like I really need to brush up on both early and contemporary Busey flicks.

My Step-Dad played Leona's husband in this movie. Sadly his scene sits on the cutting room floor. Also, Busey is kind of funny in this.

The biggest aberration of the film is not that a child plays Major League Baseball, but that Gary Busey plays a love interest. Plus that sweet guitar riff his arm plays when he throws his last agonizing pitch is just classic cinema.

You know, it's strange, for as much I think about Gary Busey, I rarely think of his character from this movie.

You know, it's strange, for as much I think about Gary Busey, I rarely think of his character from this movie.


Andy Schopp -
Just really high class and high caliber all around. Now if only he could get back on the A-List!


Well there we have it; our favorite Gary Busey films! A lot of favorites here, so let's try to sort these out and see how it all came out. Interestingly, for an actor with so many different titles to his name, only nine different films showed up on these lists (also interesting that on all five lists, each of us had a different film in the #1 spot). I'm not sure if that shows the lack of quality in a majority of them, or an excellent quality in this handful? Either way, it's clear that these are staples of this actor's career, and a great place to start when acquainting yourself with his filmography.

The overall winner here is "Point Break", which was the only film to show up on all five lists. "Lethal Weapon" was the lone film with four selections, while "Under Siege", "Silver Bullet", and "Rookie of the Year" all hit on three. Rounding out the films with multiple selections, "Buddy Holly", "Black Sheep", and "Predator 2" all had two appearances each.

All of these films are great representations from this actor's career and all that we feel are must-sees. And as always, we hope that each of these film selections help you to expand your knowledge of Gary Busey's filmography, and guide you to better and more enjoyable all-around viewing experiences.