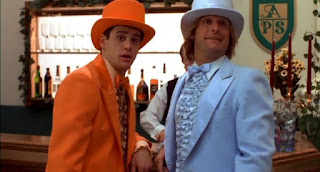 It's been a really great last couple of weeks for us nostalgic types! First, we heard that the beloved franchise "Teenage Mutant Ninja Turtles" was getting a reboot - albeit at the hands of Michael Bay, for what that's worth. And since then, it's been updates on a slew of remake news, include that for "Carrie", "Twins", and "Child's Play". And even though it's not from the same era nor a remake, "Anchorman" decided to join the party as well. Now, on the heals of all of that, Coming Soon broke news today that Jim Carrey and Jeff Daniels will indeed be sharing the screen one more time for a sequel to 1994 hit, "Dumb and Dumber"!

Earlier today, at the press junket for their new film "The Three Stooges", directors Peter and Bobby Farrelly announced the sequel was for sure happening, and that the two stars were signed on and ready to go.


"We're getting set to shoot 'Dumb and Dumber 2' in September; It's the first sequel we've ever done and we've got Jim Carrey and Jeff Daniels back."

The Brothers further went on to point out that the prequel that hit theaters in 2003, "Dumb and Dumberer: When Harry Met Lloyd" was not any of their doing.

Personally, I'm glad that Carrey finally found time for this. And I'll be really happy to see Daniels back in a role like this. He's done a lot more independent and mature work since this film, so it'll be a nice departure back to his comedic roots. I really enjoyed the first film, and honestly, whenever it happens across my screen, I always forget just how enjoyable it actually is. These two play off of each other perfectly, and I'll gladly sign up for one more chapter.

Also, I like that the directors threw that prequel under the bus and made sure everyone know they had no part of it. That movie was awful and it's good for the franchise to distance from that picture.

What do you guys think? Are you happy we're getting an official sequel to this film?
Casting