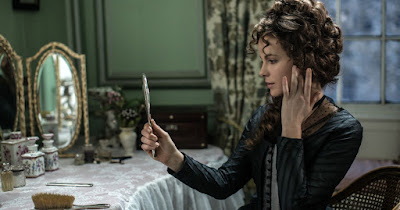 Normally I use this space to round up some overall feelings I had on the year of cinema. For some reason, I’m not sure how to write about the cinematic year as a whole. I don’t think that reflects anything regarding the quality of filmmaking this year. I think there were standouts and disappointments, just no overarching theme for me. Anyway, rather than talk about how I don’t know how to talk about the year as a whole, I’ll get into my list of standouts. It's much easier to talk about the individual movies. Take a look after the jump.

Oh! I guess I should give some forewarning: many of my descriptions are spoiler filled.

I’ll be cheating here a bit. This spot also belongs to The Witch and Nocturnal Animals.
The Witch is too effective, too terrifying for me to put on my list. I’d feel like I was endorsing evil by giving it a spot on my list. It’s one of the best films of the year, but I’m not putting it on my list.

I only saw Nocturnal Animals a few days ago, and I initially didn’t think it would make my list, but as these few days have passed it’s only gotten better for me.

Okay, let's get to the real #15, Don't Breathe. Don’t Breathe was so close to being great. Like instant classic, perfect, all-timer level. Unfortunately, the end sets up a sequel with gusto. That cheapened the whole thing for me. Just make a sequel. You don’t need to suggest that it’s inevitable. I don’t want to wait for one. Surprise me with one. But when I forget about that setup, the movie again becomes one of the best of the year for me. There are some highly disturbing images in this film and it can be difficult to watch at times, but you’ve gotta check out the cinematography. It’s first rate.

The themes are pretty simple in Neon Demon. It doesn’t hold the complexities of a Lynch or Cronenberg, but it’s grotesque, beautiful, and more importantly engaging. The occult narrative (twist?) wiped away any issues (which were already minor) I had with the film. That was a great turn, and ensured this film on my list.

I feel like so many children’s films today aim for the lowest common denominator. Maybe it’s always been like that, but I feel like the majority of the children’s films I was exposed to as a child were more sophisticated than the ones we get today. What even are The Minions? I haven’t seen those movies, but I assume the previews tell me enough. Children are smarter than that. They deserve better than that. They can handle more than that. That’s what A Monster Calls does. It has faith in children, faith in their intelligence, faith in their strength, and faith in their abilities. In regards to children’s films, I have so much respect for this one and the next film on my list. I hope they’re the beginning of a movement.

The pacing is slow, but we are taken right into the action from the beginning of the film. It very much feels like we are entering the story mid-movie. The night I saw this, I didn’t expect it to be on my list. I guess it needed to marinate. I think back to it quite often.

This really took me back to films from my childhood, specifically the 1985 film D.A.R.Y.L., but there’s an authenticity in the nostalgic feelings the film evokes. This doesn’t feel like mimicry or even homage. It feels real in its 80's children’s film sensibilities. It’s similar to what I wrote about in my A Monster Calls description. It knows children are smart and don’t need to be pandered to. Again, I’m hoping these two films are the beginnings of sophisticated films made for children.

I like seeing Captain Picard and Chekov in a movie together. Patrick Stewart seems like one of Earth’s greatest human beings. This role is so unlike him and felt like a major widening of where we’ve seen him go as of late.

This is a massive oversimplification of what the movie is, but they made the true story of someone sitting on their computer trying to find their house from a satellite view of Earth engaging and powerful. Plus, that ending. It hit me hard. It literally knocked the breath out of me.

Soooooo, yeah. Margot Robbie is really doing it for me here. She captivated me, and kept me engaged during this frenetic and sometimes terrible movie. She’s why this movie is on my list. Killer Croc’s makeup was a highlight for me as well. I just really enjoyed looking at him. I should also mention the character Slipknot. I was excited to see how they would use him, and the way they did was hilariously disappointing. I dunno… I can barely justify this movie being on my list. It just belongs.

Jane Austin is hilarious. She really knows how to patronize high-society sleaze. I think the image I posted above says quite a bit about the main character, Lady Susan Vernon. This movie cracks me up. Plus, those opening character introductions caught my attention right away. Had they not been so unique, I probably wouldn’t have stopped what I was doing to watch this movie. I can see this one moving up on my list as time goes by. It’s such an easy watch, and I love that watchability factor.

The jarring genre shift towards the end of the film is so abrupt that it’s unsettling; unsettling enough to have me question whether or not it was the right move. In the end, I always lean heavily towards the movie being exciting and successful. The real question we should be asking ourselves is where is John Goodman’s Best Supporting Actor nomination?

Natalie Portman’s evocative portrayal of Jackie draped in cinematographer Stéphane Fontaine’s masterful, felty textures put me out of sorts. This was like seeing familiar footage from a new angle, but more haunting than that statement articulates. It was like there was no distance from history of that terrible event. It was tangible, it was present, and it surfaces an understanding of the personal horrors Jackie faced during and after that event.

This movie jumped significantly on my list after I got it for Christmas. Its high watchability factor has made it a frequent companion in my painting studio. Since owning it I’ve watched it a number of times and feel more comfortably acquainted with it each time.

Quick little side note… I found X-Men: Apocalypse to be a disappointment. So I’m glad the X-Men can get some representation on my list through this movie.

If this were an exercise in listing what I believed to be the best of what cinema had to offer in 2016, this would top my list. Why does it only sit at #4? At the risk of giving away my next three films, nostalgia still plays a large role in my emotions. I’m not sure if I’ll grow out of that. The nostalgia factor was high for films 1-3. Moonlight’s look at expectations in a masculine-driven culture is difficult. The crippling anxieties in hiding, and dangers in revealing one’s self are ever present through the acting of the three men playing the lead.

3. Fantastic Beasts and Where to Find Them

I wasn’t expecting this movie to remain so high on my list all year. As with most movies, as they settle they can lose their impact and take some steps down on the list. This wasn’t the case. It stuck. My infatuation with Queenie may have had a lot to do with that. Mighty gorgeous, she is. The bond she has with her sister and the tender relationship formed with Jacob were all the more reason for me to fall for her. I was also impressed that this franchise was willing to take itself into some pretty dark subtexts. That’s something I wouldn’t expect from a money printer of this size, and I commend them for doing so.

I’m amazed this movie had as big of a budget as it had. $185,000,000. That’s only five million less than the bloated previous film. The money is not on the screen here. Beyond is not a flashy, over-the-top film. It has a smaller, more contained feeling. That doesn’t mean to say there aren’t spectacular moments; there are. Personally, this film feels more in the family of Star Trek films featuring the original and Next Generation cast. That paring down of scale is what made this film work for me. It has notes of Star Trek: Insurrection in its scope and the breaching of the Enterprise was hopefully a tip of the hat to Star Trek: The Voyage Home.

This film followed the deaths of two very important members of the Star Trek family. We were met with the untimely death of Anton Yelchin, and the passing of the legendary Leonard Nimoy. Having lost the two of them, and integrating the reality Nimoy’s passing into the narrative through Spock’s death made this film extra emotional.

I have to finish by saying that this cast continues to astonish me in how well they capture the essence of the original characters.

1. Rogue One: A Star Wars Story

This made the number one spot for many reasons, but the one thing stood out to me more than anything else: the tangible textures. The costuming, the makeup, and sets all evoked the tangible nature of the original trilogy. I haven’t researched it to find out, but that Star Destroyer almost certainly had to be a model. If not, visual effects have finally achieved a way to eliminate the slick film that seems to coat most CG objects. This was also an example CGI characters moving further away from the uncanny valley than we’ve ever seen. A CG Princess Leia and the digital resurrection of Peter Cushing as Grand Moff Tarken blew me away. Regarding its appearance; had I not known, I don’t think I would have known.

Thank you for taking a look. I know my list is rather populist, but I hope you found some drive to see a couple films you may have casually passed on. Be sure to check back tomorrow to see Nathan's best of 2016 list.
Best of 2016 Derek Clem Top 10 List