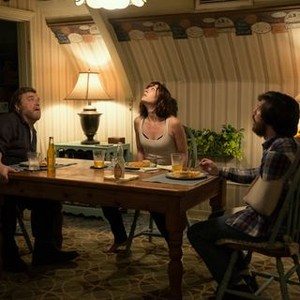 What a year 2016 was. Sometimes inspiring, other times defeating, 2016 was nonetheless memorable. On one hand, we dealt with countless, notable celebrity deaths; far more significant losses than we should ever have to see in a single year. On the other, my Chicago Cubs won the World Series for the first time in over 100 years. On one hand, Donald Trump became the leader of our country and has since done his best to run it into the ground. On the other, I got engaged to the most wonderful woman I’ve ever known. So a mixed bag, to say the least. But however you want to slice it (and for me, the pros still outweighed the cons), it was very notable. One that I will surely never forget.

Because of some of these experiences, there were many films that I think I'll always remember and associate with the year. In many ways, before we even knew there would be so much turmoil in the year ahead, the films being released were foreshadowing those notions. While the overall quality wasn't compromised, what stood out to me the most were the overarching somber tones that crowded the screens. I'm not saying there weren't positive adaptations, but many of the best films seemed very bleak - seriously, look back on the slate and see just how dispiriting it was. And really, maybe that was the perfect cherry to top off all that was 2016.

That all being said, there really were some great films to be seen, and plenty that I'm excited to talk about and share. When I first started writing my recap for 2016 (I cheated a bit and started composing it well before I saw all that the year had to offer), I was ready to note the same issues I had last year: plenty of "good" films but nowhere near enough "great" films. After a pretty lackluster spring and summer, it looked to be another down year in movies. However, after fully catching up on all of the year's offerings, I had to change my tune. I ended up feeling there were so many great selections. Of course there's always room for improvement, but I was thrilled nonetheless to re-write this paragraph with a positive spin. To offer praise and not lament the year at hand felt like a great mindset to have as we dive into these films.