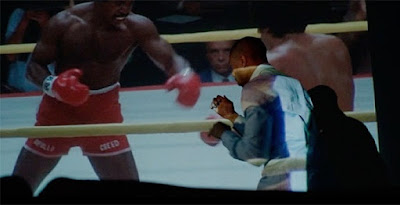 I’ve come to accept that the responsibilities of adulthood make it so I can’t watch as many movies as I used to. Last year, this lack of free time jaded me a bit towards movies. Fitting movies into adult-ness felt like a chore. It was a major life adjustment. I’ve now come to grips and the stresses have melted. First world problems, amirite?

It may be the acceptance of limited time coursing through my body, but I enjoyed this year of movies quite a bit. Interestingly, I think the most impressive thing about this year is how many great “Part 7s” there were. There’s no way that’s normal.

As usual, the following list is more a reflection of my favorite movies than what I feel was the best of the year. However, there is a blending of those two ideas when making any subjective movie list. Through my comments I think you will be able to find if my view is more subjective or objective for each individual film. Have a look below!

I contemplated on this one for a while. Is this even a movie or is it a just a Netflix special? I eventually tipped in favor of movie. I realized, realistically, there’s a great possibility that I’ll end up watching this more than any other title on my list. I think I can guarantee that I’ll watch this at least once every year for the rest of my able life. That importance...that future importance, is what secures a place for this movie on my best of 2015.

I was very much a peripheral fan of this music during the later portion of this time period. My mom’s boyfriend (now my step-dad) was into that scene and would occasionally provide me with the music. I’d listen to some of it, but I was more interested in the poppy stuff, (KrisKross, MC Hammer, Tag Team). Regardless, the music brought back some good memories from a simpler time in my life.

The plots of the 4th,6th, and sad to say 7th installment of this franchise all sort of run together for me. I can’t really recall what events belong to which movie. So why does it make my list? Furious 7, while mostly forgettable, has a great send off to Paul Walker. What I remember most of this movie, and what will mostly likely continue to stick with me, was the emotional ending. We weren’t only saying goodbye to a character, we were saying goodbye to person.

12. Me and Earl and the Dying Girl

I like the idea of film fans making low-grade or “sweded” versions of movies. That’s really what places this movie on my list. I’ve done similar things with friends and have only really enjoyed the acting portion. The rest of the process isn’t really for me. I definitely prefer watching movies, not making them. Perhaps that will change someday, but right now, I’ll continue spending my time looking at the screen.

I love the blanched look of the journalist’s headquarters and their costuming. It serves as a strong contrast to the subject matter of the film. Also, I hate to repeat some of what I said in our Ruffalo list, but I truly think this is his best performance to date. The way he alters his face and voice are always what I come back to when I think about this movie. Finally, I’d love to see Michael Keaton be in back-to-back best picture winners. I have my fingers crossed for this one.

I’ve found this movie isn’t as successful on repeat viewings, though I believe screen size is to blame. This movie has so much activity it must be seen on a theater screen. The home environment doesn’t suit it well. If you missed out seeing in theaters, make sure you have a large TV with great sound. The movie sort of requires it.

In many ways, this is a return to form for M. Night Shyamalan. I like seeing him apply some of his classic trademarks to the almost exhausted found-footage trope. This along with Willow Creek and As Above So Below have reinvigorated my interest in found-footage style filmmaking; I think it’s finding its footing again.

It’s surprisingly fun considering how little of subject matter I understood (Ha! Pretty much the opposite of what Alex spoke of the film yesterday). Plus it featured one specific line that had me literally falling out of my seat. I think a lot of people will compare this to "The Wolf of Wall Street". I know I did. Wolf has only gotten better with each viewing, I assume and hope this will do the same.

I’ve only seen this once, but I remember the visuals being flawless. I’ve probably said this about now-dated effects, but I feel like we were seeing a perfect blend of CG and life imagery. I really should revisit this to ground my excitement a bit. I loved exploring the conflicting ideologies of our two main male characters. I’m Team Nathan all the way.

This and Ex Machina are basically tied. I think this is more extraordinary than Ex Machina, giving it the upper hand, but I had more problems with this film, as well. Pretty glaring problems. So it sets them on a pretty even plane. You’ll love the score and the horror.

Tarantino has skill. His ability to turn a restricted setting into such a cinematic experience had me in awe. There are a group of diverse personalities on screen, each one very unique. I think each character will become a favorite for somebody out there. Samuel L. Jackson’s character stood out to me. Like his character in Sphere, he’s the smartest man in the room. And with that comes a lot of interesting dialogue and wit. It’s a shame he wasn’t nominated for Best Actor. I’d definitely be pulling for him.

A lot of times with pacing in film, I’m noticing editing, dialogue, or compositional patterns. Something different stood out to me in Room. I found the pacing of expressed emotions through the actors to be profound. The points where one would expect specific emotions to show through weren’t there. The choices on when to express emotions carry more sophistication than what is normally produced cinematically. The movie is very unique in that regard.

This movie sat at number one up until a day before our deadline to turn in our lists. I don’t even know where to begin. There are so many things I could discuss. I think I’ll talk about a series of performances/artworks I began making in grad school and how this movie may have ended (still yet to be determined) that series. The work consisted of positioning myself where a character is located in a projected and paused movie, and then documenting the performance through photography- putting me “in” the movie. The work stemmed from people telling me I looked like Orlando Bloom characters during my long hair days and through the inspiration of discussions with installation/projection artist Jutta Strohmaier. Basically, people told me I looked like Legolas, so I figured how about I just become Legolas. There’s a scene in Creed where Adonis projects a boxing match between his father and Rocky on a wall. Eager to prove he can make a name for himself, he positions himself against his father. Shadowboxing the shadow that will be cast over him (you can see a still from the scene above). As soon as I saw this scene I thought, “Whelp, it’s been mastered. It’s been perfected. Time to throw in the towel on this series of artwork.” But who knows, maybe my days with that series of work aren’t over. Rocky kept coming back. It looks like Adonis will. I probably should too.

Years down the road, when VIII and IX are released, I can see myself shifting this to the number one spot on my 2015 list. I can’t justify it right now because the story is so unfinished. It just doesn’t feel right for me to place it at number one, regardless of how much I enjoyed it. There are a few issues I have with the film, but as a fan ready to defend the franchise I can easily find ways to fill any gaping problems through delusional reasoning or denial. It was great to meet new characters and emotional to see old friends again.

Your childhood, my childhood; we grew up being fed that the Tyrannosaurus Rex is the most hardcore dinosaur to walk this earth. We accepted this truth. This truth was continued and solidified with Jurassic Park and The Lost World. Then comes along Jurassic Park 3 and this dinosaur called the Spinosaurus, and it’s droppin’ a T-Rex like it ain’t no thang. This was not acceptable to me. Not in the slightest. I won’t even allow Jurassic Park 3 in my house. The movie is a waste. I’m happy to say Jurassic World fixed this mess. Jurassic World made, once again, the T-Rex the most badass dinosaur to ever exist. Though we’ve always known, faith in the T-Rex has been restored across the world. This movie adapts the franchise to fit firmly in today’s blockbuster tonalities and does so while fixing my only problem with the franchise. For that, I owe it the number 1 spot. T-Rexes Rule! Spinosauruses and Indominus Rexes Drool!


Nathan will be posting his list tomorrow. Be sure to check his out, as well.