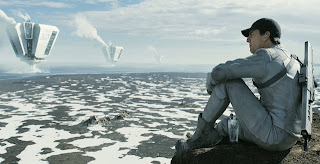 Oblivion (much like Joseph Kosinski's last effort, TRON: Legacy), is eye candy masquerading as a science fiction epic. Visually immersive and a gorgeous representation of a possible dystopian future, it quickly becomes tarnished by lack of character depth, contrived storytelling, and horrendous pacing. The only things holding this expensive product above water are the star power of Tom Cruise and surprisingly clean dystopian vistas.

As made clear during the first few minutes, Earth has previously been rendered uninhabitable by mankind’s nuclear retaliation and last effort in destroying alien invaders (Scavengers "Scavs"). Jack (Cruise) and Victoria (Riseborough) are stationed on Earth to extract its remaining resources necessary to sustain the new human colony on Titan, memories wiped clean in the event that remaining scavengers might forcibly extract information through interrogation. Drones are used to protect the machines that extract these resources and it is their main objective to repair them. During a routine perimeter check Jack discovers a homing beacon that signals a spaceship which eventually crashes in sector 17.

When investigating the wreckage Jack discovers capsules with hibernating humans contained within. One of them contains a woman (Kurylenko) from Jack’s recurring dreams, who he is able to save from attacking droids that kill the rest of her crew. However, droids are supposed to kill Scavs not humans. Upon further investigation, Jack and the mystery woman uncover the truth about the Scavs and the events that led to the destruction of Earth.

Tom Cruise proves he can still carry a movie with an engaging performance, but the predictability of nuance mirrors just about every creative aspect of Oblivion. The main problem is that the narrative has nothing new to offer; I imagined the story development process as a room full of studio execs brainstorming every element of successful sci-fi films from the past couple decades and throwing them into a script that is catered towards mass marketability rather than providing anything original. However, the source is actually a graphic novel which Kosinski co-wrote, so maybe something was lost in the translation... The film just plods from one revelation to the next, which aren't really revelations anyway, because the audience is always a few steps ahead of Jack. While the script is surely to blame for this, the spoilerific promotional trailers didn't help.

Regardless, a derivative story can be made entertaining with the right direction and editing. This is another area where the film fails, which is a shame considering the sizable budget and effectively crisp visuals. With only one inspired action scene (also spoiled from the trailers) it struggles to find the beat, feeling as lifeless as the worker drones carrying on routine tasks. And that is Oblivion at its core - a routine effort from film makers more interested in the opening weekend than delivering a product that has sustainable interest in the film community. Young/impressionable minds or those looking for something easy to digest might find something here, but for others it may be as stimulating as a sleeve of saltine crackers.