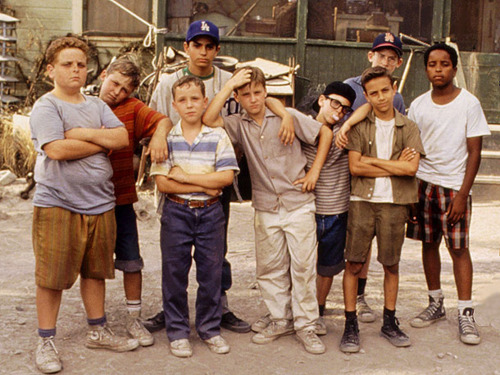 Recently, I had the opportunity to participate in a Q&A with writer/director David M. Evans. If you're a 90's kid, you might remember him for directing The Sandlot and First Kid (yup, Sinbad as a secret service agent), but you might not have known that he was responsible for writing and starting to direct Radio Flyer. The film stars future Frodo Baggins (Elija Wood) and is a unique story about two young brothers dealing with child abuse. It was to be his first directing gig, but due to Hollywood politics, he was replaced by Richard Donner. Radio Flyer is actually the reason he's doing this Q&A, as he's releasing a novel of the same story, The King of Pacoima. But this year also marks the 20th anniversary of The Sandlot, so it seems like the perfect opportunity to pick his brain about that production as well.

Hello, I’m Ben Foutch from the Slackers Selection Movie Blog. Thank you for sharing some of your time in participating in this Q&A. Most of us from the blog had the pleasure of growing up with some of your films and are excited to hear your responses. If there is any question you don’t feel comfortable with, feel free to tell me to get bent.

No worries. Fire away.

This year marks the 20th anniversary of your family classic, The Sandlot, a film this blog respects greatly. Do you have fond memories of the production? Any particular one that signifies your memory of the job?

The whole production was like one big summer camp for the kids. They gelled really fast as friends on and off screen. That made the “Herding Squirrels” thing much easier. Working with them wasn’t so much “working” or directing as it was guiding them like a big brother or a camp counselor. They were all great mimics too, so when we would get stuck (which wasn’t very often) I could say “Try it like this…” and then line-read them and they would mirror me and we’d get it done. The scene that probably took the longest to shoot was the “S’mores scene,” in which Ham instructs Smalls in the fine art of making a S’More. Pat Renna was so damn funny saying “You’re killin’ me Smalls!” That all the other guys busted up laughing every time he said it, and essentially rendered the take unusable because they were in the background. And when kid actors get the giggles, forget it, day over. They simply cannot stop laughing. Eventually (after hours and hours) I had to use a take in which I told the guys “look if you can’t stop laughing, just laugh with your mouth closed!” The take used in the movie, if you look at Benny in the background, poor Mike Vitar is actually biting his lip to keep from ruining the take.

It was probably a great, albeit unique, experience to work primarily with child actors, but you certainly brought out some inspired performances. Do you have any advice for aspiring directors who are planning to work with young actors for the first time?

Cast the kid, not the character. Kids are generally very good at bringing the emotions when needed in a scene, it’s all the in-between stuff that can be difficult. I had written several of the characters in The Sandlot a particular way, but then, upon meeting a couple of the guys I cast, I re-wrote the characters to suit their personalities.

The film is heavy on nostalgia and the impactful experiences of childhood, which seem to be recurring themes of your filmography. Are these types of stories your passion as a writer/director, or have your early projects put you in a niche?

I have very strong memories of my childhood and so I suppose that makes childhood and adolescence fertile creative ground for me. Having said that, it is not the only thing that interests me. I write stories that interest me, I have scripts that range from a true story epic western, to a drama about a reclusive again writer. I get associated with family and kids movies because ever since I sold Radio Flyer, every family oriented or kid oriented script that gets written by anyone comes across my desk. I love working with kid actors because I’m still 12 years-old on the inside.

On to more current matters, your new book, The King of Pacoima, is the novelization of Radio Flyer, which saw Richard Donner replace you as director. With what I can't even imagine behid the scenes of that going down, writing this book must have been a cathartic experience for you. Is that the inspiration for the book?

The King of Pacoima is actually the novel I wrote upon which I based the screenplay for the film. After the film was released I put the manuscript away promising myself someday that I would return to it and get it published. So I edited it somewhat and included photos, storyboards, old kodachrome slides and paintings I had commissioned to illustrate the book and hopefully add a depth of authenticity to it for the reader (it’s autobiographical to a large extent). Print publication is dying, and since the reach of publishing in the e-book formats is worldwide, you’re only limited by how either good or bad the book is, I think. And I think the book is good.

What is the main lesson you learned in your time spent on Radio Flyer?

It was one of the harshest Hollywood baptisms-by-fire in history. I learned not to get in business with people that are going to “F” you over, and learned that I can take a punch, get back up, make a better movie (The Sandlot) and prove them all wrong.

Radio Flyer was released in 1992, a little over twenty years ago. While it was iconic to a certain generation, by all accounts it was not as successful as I'm sure you would have hoped. Without trying to sound overly critical, now that the movie has more or less faded from the collective memory of pop culture, why wait this long to finally publish your book?

Radio Flyer has hardly “faded from the collective memory.” The film did not do well in its initial domestic theatrical release, and I am not a particular fan of the film itself, as such. However, the subject matter gave it an importance to people that remains to this day. The book is an altogether more emotional experience than the film will ever be. I think it needed to age or season or something like a good whiskey. When the e-book thing started to happen it seemed like a good time to publish it.

When will we be able to purchase The King of Pacoima?

Sometime around July of 2013, and it will be available on all e-book platforms from Amazon, B&N, iBooks, etc…

Last but not least, as it is something of a tradition at this site, are you able to provide your Top 5 favorite films? Maybe five notable films that have inspired you as a writer and director over the years?

Thanks again, David. I'm looking forward to your book.

My pleasure. Thanks for the time.

That wraps up my interview with David M. Evans. It was a blast to take this trip down memory lane and pick his brain even for just a few minutes about some of his films I remember fondly from my childhood. If his account of the Radio Flyer story is anything like the storytelling he did in The Sandlot, then I'll be one of the first to order his new book when it comes out.
Ben Foutch Interview