The somber tones of the previous days (at least the ones I attended) were thrown to the wind, as Tilda Swinton and Chaz started the day off with a little dance party. "Just think of this as a spiritual service", Tilda proclaimed before busting out some grooves to Barry White's My Everything. While I'm not really into audience participation group dance parties, it was hard to deny the positive vibes flowing through the theater. This set the tone for the rest of the day's events. 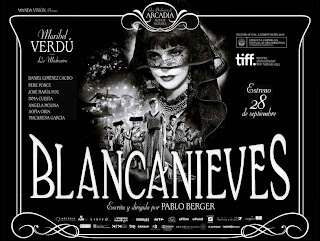 The first film of the day was Pablo Berger's Blancanieves. While there were dour moments with emotional significance, the director's "love letter to European silent cinema...made for people who have never-seen a silent" was an overall uplifting delight to the senses. Its incarnation of Snow White might be my favorite ever seen on screen and I wasn't the only one highly impressed; the lady sitting next to me said "it blew The Artist out of the water".

The second film shown was a documentary, which played similarly to the reality television format and was the product of a social religious experiment aimed at the relationship between a spiritual guru and his disciples. The director, just a normal guy from New Jersey, had a "skeptical look at religion", especially concerning the integrity of numerous spiritual/cult leaders and gurus that draw the attention of people looking for guidance and the answers for achieving true happiness. He decided to become a guru himself in hopes to show the world that spiritual leaders are just regular people and that regardless of individual belief systems, the key to true happiness lies within ourselves - we are our own gurus. The film plays as an awkward comedy,  but it doesn't necessarily pity or poke fun at his gullible disciples. In fact, many of them have improved their outlook in life and are generally happier for adhering to Kumare's teachings, even though he revealed his true identity and purpose at the end of the film.

The next film, Escape from Tomorrow, is a surreal trip through repressed memories and the horrors lurking beneath the illusions created  by Walt Disney. It follows a father during his family vacation to Disney world where he soon becomes infatuated with two underage girls, who inadvertently guide him through a schizophrenic nightmare involving twisted imagery, seduction by an evil milf, and a serious case of cat flu. Due to the controversial nature of the film and blatant bashing of Disney, scenes that were shot at the park were done so guerrilla style. The director describes the process as "nerve-wracking" and when asked what the repercussions will be from the corporate giant, he replied with a smile, "we'll see what happens". As an audience we were lucky to attend this film, as it is the second official screening (first being Sundance), though it is a slightly different edit.

The last film of the day was the superb coming of age drama The Spectacular Now, and is a gripping tale involving a popular teenage boy who falls in love with an unpopular girl from school and soon becomes aware that his addiction to alcohol and carefree "in the now" philosophy on life affects not only his future, but also his new girlfriend. Part of this seems like an overused premise from numerous teen/high school flicks, but the execution puts a realistic light on teenagers and doesn't fall into any cliches or stereotypes you'd expect from setup. The characters help each other grow as people, and although the ending is rather ambiguous, you feel the impact they've had on each others lives. The narrative tends to focus a lot of attention on alcohol addiction, but the director feels that it isn't the point of the film; it's about coming-of-age adolescents and dealing with real life problems. Lead actress Shailene Woodley says that she looks "for scripts that leave me affected" and "the script screamed humanity and rawness". This is another film we were lucky to see, as another early screening.

After the Q&A, some of us Slackers had the opportunity to briefly meet Shailene in person. Though she had places to be, she graciously took the time for pictures with the surrounding fans. When I asked her if she was worried about any irrational fan reaction to her portrayal of Mary Jane Watson in the currently filming The Amazing Spider-Man 2, she confidently replied "I haven't even thought about that". I respect her fearless attitude, because a lot of comic book fans will hate anything and do not understand the difference between film and comic universes - don't let them get you down Shailene.
Unfortunately, tomorrow is the last day of Ebertfest, but I had a great time this year and saw some unforgettable films. Hearing the various filmmakers talk about Roger and his influence on their lives was touching/inspirational, and though we will no longer be able have the privilege of watching anymore of his hand-picked selections, I hope the tradition of this festival continues in honor of his contributions to the film industry and our local community.