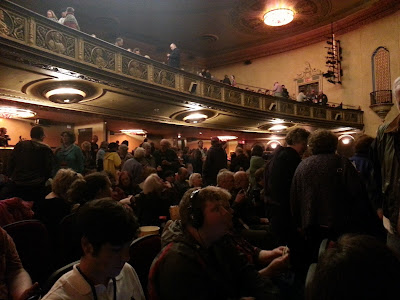 To Music
Vincent: The Life and Death of Vincent Van Gogh
In The Family
Bernie

As many of you know from yesterday's post and the title of this one here, we are jumping into Day 2 of the Ebertfest happenings, and happy to do so! Unfortunately, the weather caused a few problems for both getting any pictures outside and appearances of a few of the scheduled stars. It was more than slightly disheartening to hear that Jack Black wouldn't be making it but as per usual with the annual Ebertfest crowd, we just keep on keepin' on. I honestly don't think there is a single disaster that could keep our crowd away - short of a tornado landing immediately on top of the theater and not allowing us to get in at all...since it wouldn't be there. We will go whether it's rain or snow, wind or lightning. We push on for our love of film and our hope to grab just a sliver of insight to the late, great Roger Ebert. It's also, as much as any crowd I have ever had the pleasure of sitting in the middle of or standing in line with, an amazing social event where you can meet some amazing people who you might never have had the pleasure of meeting! Well here I am rambling on, you should have just interrupted me...

As we took our seats close to the stage gearing up for the later Q&A, people begin settling in everywhere. Chaz comes on and gives us an amazing warm, heartfelt opening speech and brings out some brand new, next generation filmmakers, Sophie Kohn and Fieke Santbergen, the directors of "To Music" - a nice little short that takes place in France about the healing power of music. Sophie reads off an email she sent to Roger back in 2006, the first email she ever sent him actually, which talks about her feelings towards movies in general and how she has idolized him. She wasn't lying one tiny bit when she said she thought that it was fitting for us to hear. It was an amazing look back into how Roger has affected many generations and continues to do so; it was a great insight to how other people who had met him throughout there lives described him, as a person and not "the famous guy who everyone knows is in love with movies".

After To Music played we started up the movie by Paul Cox called Vincent: The Life and Death of Vincent Van Gogh. It was a very interesting movie displaying many works by Van Gogh and a multitude of letters he had written to his brother. It describes through narration how he started and warped through his mindset and became the artist who is now so famous only after his death. It was full of emotion and color and a great way to start off this year's festival, as I know many of us had a million different emotions floating around. It is and will continue to be a very bittersweet year for us at Ebertfest. As Chaz said "I feel his spirit here in the Virginia, its like a temple" and she isn't wrong. His chair still sits at the corner and I know that I myself have found myself peering over to it just in case Roger happened to be giving his iconic "Thumbs up!" but we are here to remember him as much as we are here to celebrate him; these movies more than any other year at Ebertfest symbolize what he wanted us to see, it is the message he has left behind for us and I intend on reading and watching carefully to make sure I see that message clearly.

Getting back to the actual schedule, as the movie wraps the applause ensues and we all start checking our watches to see if we have a minute to go grab a quick meal before we delve into the next movie which is 2hr 50min long! It turns out that we do not. We decide to suck it up and sit through the movie, and I am so glad we did! This movie, In the Family, was phenomenal! It was such a great story about sacrifice and family. What is it that truly defines and family? This movie gets you so engrossed so quickly that you begin to forget about the passing of time. You become a partner to those characters and really feel what they are feeling. Now I will say that the length is unnecessary, as fellow slacker Ben Foutch puts it, "Its just irresponsible". Many of the shots are long landscape shots or establishing shots of our main character being alone. While this is important we could have lost an easy 20min without loosing the integrity of what the movie was making us feel. All in all, just don't go into this one hungry as they talk about food more in this movie than most Thanksgiving movies do!

We then got our much deserved and appreciated "lunch" break! Piles on Piles of food from our local Peking Garden! We stuffed our brains back into action and headed back through the treacherous storm to make our seats on time for Bernie, the highlight of most peoples' night here. We took our seats as the theater began to crowd more and more. If it didn't sell out it was damn near to it; we were packed to the rafters! After the lights came back up we got our Q&A sans JB, but Richard Linklater was still here and willing to spill out all his words of wisdom! Then we got a suprise guest! JB called in to help with the Q&A! We got the chance to ask him some questions and see some of his very unique personality! He made a promise to visit Ebertfest yet and I will hold him to that as long as I am able.

After everything was done and finished, a few of us Slackers got the chance to talk to Mr. Linklater face to face. we got to ask him a few questions and do a general "shoot the shit" with a little less audience participation. One question I got to throw at him before he left was "So, any real possibility for a School of Rock 2?" and his answer, "No, unfortunately we had it but it kind of fell flat. You really have to do what you want to be doing and it just isn't right for now. Jack and I have something else planned but if nothing works out, who knows maybe we will pick it back up and take a closer look." So, sorry for crushing any dreams there...including my own...but School of Rock 2 is shelved for now.

Well that's about it for my Day 2 Ebertfest rundown. I hope you enjoy and if you haven't had the opportunity to come down this year just remember to stay locked into the Slackers Selection Movie Blog for all your Ebertfest needs. As always feel free to add any comments below or ask questions. Any of us would be happy to answer if we can. See you at Day 3!
Andy Schopp Ebertfest