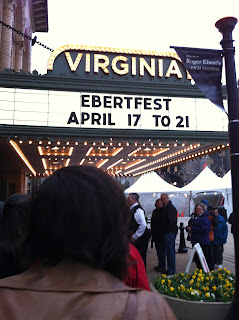 I Remember (short)
Days of Heaven

The movie theater experience can be hit or miss depending on the crowd and venue. Is there anything worse than hearing other peoples' conversations while constantly shifting in an uncomfortable chair, only to come to the realization that the trip to the theater was the worst decision of your day? Thankfully, you won't have to worry about those kinds of problems when visiting The Virginia, especially during Ebertfest. From the quality films, candid celebrity Q & A, aesthetic environment, and respectful patrons, Ebertfest is one of the best movie-going experiences you will ever have. It is because of these factors that the possibility of getting caught in a downpour while standing in the massive line to enter the iconic theater didn't dampen my anticipation, or that of fellow slacker, Derek Clem.
Chaz took to the stage of the newly renovated theater to a standing ovation and welcomed us to the festival; sadness from the recent loss of her husband crept through in her voice. "Thank you for giving me someplace to go today. I needed this", she said to a humbled audience. She mentions that Roger wanted the festival to continue after his passing, and that "tonight we're going to celebrate Roger" - applause erupts from the crowd. Before introducing the first film of the night she informs us that this year's festival is dedicated to Haskell Wexler, who is in attendance to represent Days of Heaven, and that there is a special sing along planned by Roger to start after the short film I Remember.

I Remember was introduced by a moving speech from director Grace Wange, also accompanied by June Kim. She credits and thanks Roger for bringing out her potential as a filmmaker, and that he not only helped her career, but also her growth as a human being. The film focuses on a young women reminiscing about a romantic time with a former lover; completely lost in thought as she mopes around in an apartment - the view from her window blocked by an angled roof of another building. As she clings to the memories of the time spent on the beach, the cacophony of city noise reverberates through the tiny room, trapped, like the feelings she can't let go. After watching the film, it is obvious to see what potential Roger saw in the young director. In a short amount of time and with almost no dialogue, we are shown a portrait of the complex relationship between the mind and emotional desire.

Next, Chaz delivered the promise of a sing-a-long to "Those Were the Days" with new lyrics by Roger, which was led by the UI Black Chorus.

Once upon a time there was a theater, 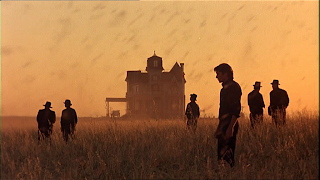 After the singalong, the main film for the night, Days of Heaven, played to an eager crowd. The Terrence Malick film is well respected in the cinematic community, especially concerning the camera work, which according to Wexler, used mostly natural light, capturing "things as they were". The film gracefully tells a story of hardship, passion, and betrayal, with little dialogue aside from the narration of the main character. Like many have said before, it's a beautiful film, transporting the viewer into the vast openness of the prairie on which it was filmed. Wexler, who was called in to help shoot the picture due to running over schedule, captured the original photographer's (Nestor Almendros) vision, which has been compared to early 20th Century paintings. He was adamant though that this was not a conscious decision on his part, instead just him trying to stay true to the work that had already been done. Though he didn't get credit by the studio as a lead director of photography, which led to some heated disputes, it is safe to say that audiences recognize his contribution to the captivating film. After attempting to explain some of the photography methods, he jokingly remarks that "If you don't understand it, you're not missing anything". He recalls Malick as a "weird guy" and "ecologically spiritual". One of the highlights of the film is a scene involving a locus swarm attacking the wheat crops, which was actually coffee beans that were dropped from a helicopter. The film took eighteen months to edit and won the Academy award for Cinematography. 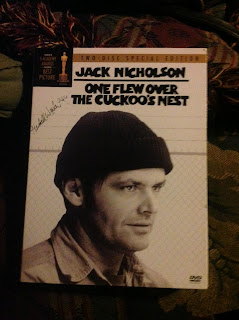 When the Q&A was over we ran into another fellow slacker, Tracy Allison, who was also taken by the film. Derek was able to snag an autograph from Wexler before leaving, and when the icon took a look at the DVD cover for One Flew Over the Cuckoos Nest, he said, "Oh, Jack! I go to basketball games with him." The man seemed tired and was in high demand from fans, so we didn't pester him with any more questions. Overall, it was a great night at the movies with an excellent crowd. If you haven't seen Days of Heaven, I highly recommend it.

You can look forward to Thursday's rundown from Andy Schopp, which features main guest, Jack Black. Black is representing his film Bernie, which shows a mature performance from the comedic actor. Hopefully he doesn't get held back by scheduling conflicts like Patton Oswalt did last year. If you don't have tickets for the sold out festival, you can always stand in the rush line in the hopes that something will become available. Apparently, in the festival's history, they've never turned down attendees. I can't verify that information, but if you need the inspiration to give it a shot, I can't think of anything more reassuring than that.
Ben Foutch Ebertfest Film Festival