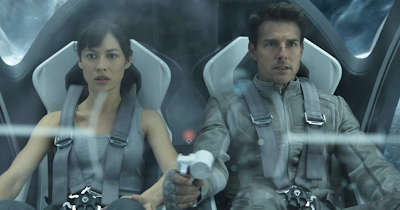 Welcome back for your weekly recap of all news and notes from this weekend's Box Office totals. To no surprise, it was Tom Cruise and "Oblivion" that led the box office this weekend, and by a rather large margin. This was the only new film opening in wide release, however, so there was little fresh competition.

Last week's big winner, "42", made another strong appearance this week, providing the only other stand-out total of the weekend. Outside of these two titles, the drop-off was significant, and overall, the box office hit its lowest point since mid-March. We can expect one more weekend mini-lull coming up ("The Big Wedding" and "Pain and Gain" open next week), but after that, we're into May, and there are exciting titles every week of the month.

For now, hit the jump to check out the specific totals for each film this weekend!

As was mentioned, it was no surprise at all that "Oblivion" took the top spot this weekend. This action movie starring Tom Cruise and Morgan Freeman felt more like a summer blockbuster anyway, so audiences were surely glad to see something like this in April. The film opened with $38.1MM domestically, and can already add to that $112MM internationally (it got a head start overseas). That makes for a grand total of just over $150MM, a number that already looks good for a film with a budget of $120MM. Tom Cruise generally plays quite well around the world, so throwing him in your movie usually means you're in pretty good shape. The film made for the seventh-best all time opening for the month of April, and had the fourth best opening ever amongst Post-Apocalyptic Films.

To this point, the film has a 52% rating on Rotten Tomatoes, which seems acceptable. These March and April action films are usually here for a reason, and if you can come out at over 50% then I feel like you did okay.

In second this weekend was "42", the Jackie Robinson biopic starring Chadwick Boseman and Harrison Ford. The film grabbed $18MM this weekend, bringing its total up to $54MM. That's already a nice bit more than its $40MM budget in only two weeks.

I saw this film last weekend and thought it was quite good. There was a lot of history in there that I think all audiences should familiarize themselves with. I did not do this post last weekend, however, so I should note that the $27MM it made when it opened was the most ever for a Baseball Movie. Historically, baseball films don't do that well at the box office, so this isn't the greatest of feats, but for baseball fans like myself, it gives a little more credibility to the genre to see something other than "The Benchwarmers" now sit atop that list.

As we move to third place, we take a pretty big drop down to $9.5MM, which "The Croods" earned in its fifth weekend. That's now $154MM domestically and $272MM internationally, making for a worldwide total of $427MM. No surprise that just last week DreamWorks Animation ordered a sequel for the prehistoric film. "The Croods" is currently the 14th highest grossing DreamWorks Animation film (domestically). It has a pretty easy road to the top 10 on that list, but climbing much higher than that should prove to be difficult.

In fourth place this weekend was "Scary Movie 5", which was in its second weekend. The film made $6.2MM, bringing its total up to $22.9MM. This is just more than its $20MM budget, so the film did its job. Looking back on the previous installments of this franchise, it's nice to see the box office numbers continue to plummet. The first film or two from this series was funny, but the rest (I'm guessing - I never saw them) have been terrible. I know that's terrible to say not having seen the films, but come on, we all know that's accurate. Audiences gave this series too much credit with the last two installments, but it looks like they've finally moved on at this point. I would imagine the current film has done enough to warrant another chapter, but we might not ever see much more than that.

Rounding out the Top 5 was "G.I. Joe: Retaliation" with $5.7MM. The film is now in its fourth week, and has racked up $111MM domestically, and another $211MM internationally, making for a worldwide total of $322MM. Believe it or not, as bad as the first film was, that number already surpasses what Rise of the Cobra made, and it carries a budget of about $40MM less ($130MM for Retaliation). I know that comment sounds backwards - if the first film was so bad, is it a surprise that this one is doing better? - but the logic is that even with audiences unhappy with the first film, they've all come back for round 2. It's a bit surprising to me.

No bigger, notable numbers for the film outside of those, but it seems clear that we're definitely in line for at least one more film from this franchise.

Outside of the Top 5, not much stands out. Other new releases, "Home Run" and "The Lords of Salem", both opening in limited variety, both had solid per-theater averages, providing promise for further expansion moving forward. Also, I'm amazed that "Silver Linings Playbook" is still hanging around the top 15 - it even got a theater increase this weekend! Pretty impressive run for the film.

Check out the full weekend numbers below, courtesy of Box Office Mojo: 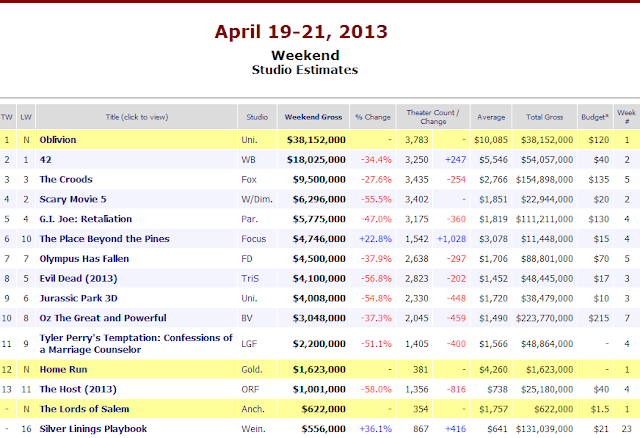