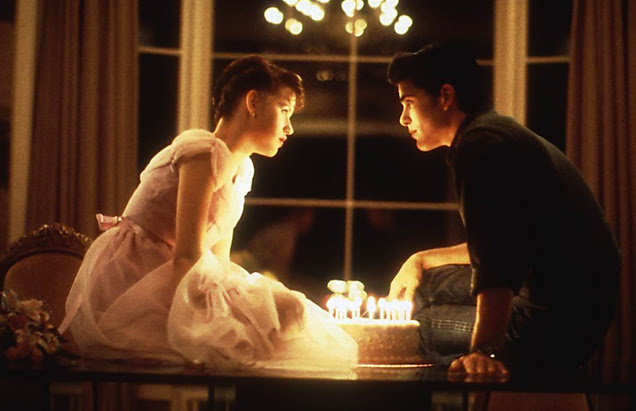 For this edition of the Top 5 Movie Guide, as is featured in this weekend's 21 and Over, we take a look at some of our favorite Birthday Movies! Straight-A college student Jeff Chang has always done what he was supposed to do, but when his two best friends surprise him with a visit for his 21st birthday, Jeff decides to do everything he wants to do for a change, even though his important medical school interview is early the next morning. What was supposed to be one beer becomes a night of humiliation, over indulgence, and utter debauchery in this coming-of-age-comedy about living youth to its fullest.
While the list below doesn't only reflect movies that take place on birthdays - instead, the idea of birthdays is good enough for this list - there are still plenty to go around. As you'd expect, favor generally went to films that had more to do with true birthdays than others, but most of the writers below got pretty creative with their selections, finding some gems that probably wouldn't regularly be associated with this category otherwise. It made for a really great group of films, with each individual list featuring at least two titles not on any others.
Before we jump in, since it could be considered for the category, as is regulation, the Lord of the Rings films have been omitted from any consideration, as they were proudly enshrined back in November. If you recall, there is a pretty notable birthday for Bilbo Baggins featured in one of the films.
Alex Schopp
1. 13 Going on 30 (2004)
Yep, that just happened. I love Jennifer Garner and really like Mark Ruffalo, and will watch just about anything that either of them are in. They have perfect chemistry in this movie, and even though it's silly and light, it's still well crafted and features enough cheesy 80's references to make it worth your while. I own the special edition of this movie and watch it much more often than any grown man should.

2. Sixteen Candles (1984)
Maybe the most birthday-centric film we'll see in this post today - thus seemingly the most cliché - but you have to include it. We're a John Hughes generation, and while this isn't my favorite from his filmography, it's still a quality staple that I greatly enjoy. Is today's youth still watching these movies? Unfortunately, I would imagine most of them couldn't even tell you who John Hughes is. I hope I'm wrong about all of that.
3. The Game (1997)
This is a pretty neat psychological thriller that does a great job of constantly keeping you guessing. I really feel for Michael Douglas in this movie, and always wonder if I could handle everything that he's faced with as "well" as he does. I can't decide if I'd ever want to find out.
4. Logan's Run (1976)
Is there's a cheesier sci-fi/futuristic movie than this? I love the concept though, where in a dystopian future (I've previously expressed my weakness for this genre) once you turn 30, you're killed. This is accepted fate for the society, except for one man who wants more. The rest of the story centers around him breaking free from their confined city, and experiencing an outside world that he didn't even know previously existed. Neat stuff.
5. Bloody Birthday (1981)
I watched this on Netflix a few years back and suggested to my fellow co-writers to check it out. It's standard 80's B-movie horror fare, but there are some great/cheesy kill scenes. Plus, I'm not sure there's anything creepier than a group of soulless 10-year-olds killing people in town for sport. If you like horror films, this is worth a watch; if not, this might bore you.

1. The Game (1997)
The rich sure know how to give unforgettable birthday gifts. Sometimes I feel like this would be one of the most psychologically damaging experiences in a lifetime, but how awesome would it be...I'm so jealous.
2. Sixteen Candles (1984)
This is an obvious choice, but anyone who knows me is aware of the strong diet of John Hughes films I had growing up. I don't think this one has aged as well as some of them, but the characters are memorable and it's still a fun-spirited movie experience.
3. Child's Play (1988)
Talk about another traumatizing birthday experience. Imagine being a small child who really wants a Good Guy (rather ironic) doll only to get one on his birthday and come to the realization that it is inhabited by the soul of some Voodoo practicing serial strangler.
4. Batman Begins (2005)
Bruce Wayne is not only a badass when under the guise of the cape and cowl, but is also more than adept at telling party guests to F-off.
5. Problem Child (1990)
That spoiled little brat had it comin'. It was a hard lesson to learn, but she should have been nice to the mischievous little boy dressed as the devil, at least until the party was over. That is just common sense.


Derek Clem
If LOTR wasn't enshrined you know I'd be celebrating when Bilbo Baggins turned eleventy-one on this list.

1. City Slickers (1991)
My favorite Birthday movie is the home of one of my all-time favorite movie scenes ever. Billy Crystal provides some of the best midlife crisis comedy you could ever ask for.
2. Liar Liar (1997)
If my birthday wishes from my youth came true like this kid's, I'd be married to Kelly Kapowski right now.
3. Uncle Buck (1989)
John Candy provides the birthday breakfast we all want on our birthday. I really want to see that toast.
4. Mrs. Doubtfire (1993)
The middle Lawrence brother's birthday is responsible for that divorce. It's HIS fault! Had he never been born, Robin Williams and Sally Field would still be married to this day!
5. In Time (2011)
Wouldn't it be great to stop aging on your 25th birthday? While this movie is slightly generic I really love its Gattaca-esque visual style.

1. Harry Potter and the Sorcerer's Stone (2001)
Goes from worst birthday ever to best birthday ever.
2. Liar Liar (1997)
Jim Carrey's son in this film needs to get off his high horse. Like that kid hasn't told his fair share of lies?
3. Sleeping Beauty (1959)
What are your plans for your birthday this year? Oh not much, just gonna fall into this coma. The scene were she walks into the fire place creeps me out to no end.
4. Willy Wonka and the Chocolate Factory (1971)
Okay, the birthday scene in this movie was downright depressing. It all worked out in the end though.
5. Old School (2003)
I don't love this movie, but I hope I can maybe throw an epic party like that at some point when I get older.

1. The Game (1997)
This seems like a happy list topic, and that being said – this might be a strange pick for the top spot. It’s a thriller, and for the lead character’s birthday, he’s given the gift of ‘the game’. It’s full of clever twists and turns and it’s like no game ever seen before. It made me wonder what would happen if I was given a chance to play.
2. Sixteen Candles (1984)
Well, this is cliché, of course. When I was young, this movie was important maybe because it was supposed to be? But, it ended up turning out that way as well. I identified with Molly Ringwald’s character the same way that angsty teens all over America have for decades. Her entire family forgot her sixteenth birthday which led to a rocky start for the day, but by the end things definitely started to look up.
3. Mrs. Doubtfire (1993)
The epic birthday party (complete with a pony indoors) thrown at the beginning of this movie is the catalyst for the Mrs. Doubtfire plot itself. I watched this over and over as a child and I was always jealous of the wildness of this party. To this day, when I hear “Jump Around” by House of Pain, I think of this exact birthday scene.
4. Chocolat (2000)
When a woman and her daughter open a chocolate shop in this otherwise conservative French town, they represent everything the townspeople protect themselves against. The birthday party this woman throws is outdoors and complete with chocolate dishes and even boasts gypsies as guests. Is it my ideal party?
5. Marie Antoinette (2006)
In my memory, this movie is one giant party. Antoinette is stifled in her new court life and uses her lavish lifestyle to combat that, much to the chagrin of the rest of court and her new home, France. Her birthday party is no exception to this. I mean, what would you do if you had access to the riches of France? Well, hopefully not what she did.
There we have it, folks! Check out that variety. We just missed the 20-film mark, but still, the 19 different selections are the most we've seen for a long time. If this grouping of films doesn't satisfy your desires for this category and give you plenty of watchable options, then I don't know what will.
As there were so many different films, there was very little crossover this week. Only four films received more than one selection, and no film appeared on five or even four lists. We did still see two films that appeared on three lists, both Sixteen Candles and The Game. Not only are these probably the two films above that are most centered around the birthday theme, but they both make sense for being the top vote-getters this week. Sixteen Candles is a John Hughes classic, and The Game is a well-crafted psychological thriller from David Fincher. You can't go wrong with either of these options.
Otherwise, Liar Liar and Mrs. Doubtfire were the other films receiving multiple picks this week, each appearing on two separate lists. Two classic comedies from the 90's, both providing plenty of laughs and teaching us a few lessons along the way. And both seem to still hold up today, decades after their release.
As always, we hope that each of the selections above helps to expand your knowledge and appreciation of some of the best films that this category has to offer, and guides you to better and more enjoyable all-around viewing experiences.
Happy watching!
Top 5 Movie Guide