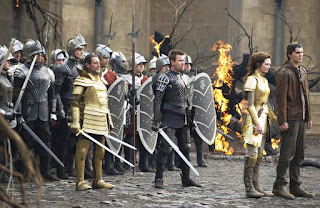 The beginning of March. While winter has finally started to fade away, it doesn't appear that the box office has yet defrosted. In 2012, this same weekend saw a $150MM weekend total, similar to what we'd been seeing in the previous month of February. This year, February was a disaster, seeing $100MM+ less overall come through the theater than we've seen in recent years. Films have been historically bad, with few surprise gems (a la "The Grey", "Chronicle", or "Star Wars: Episode I - The Phantom Menace") to save the day. That time was supposed to come this weekend when Warner Bros. dropped $200MM on a fantasy epic high in special effects and CG creatures, meant to bring the masses back to the theater and resurrect the box office - wait, are we still talking about "Jack the Giant Slayer" or last year's "John Carter" that pulled the same damn move opening at this time last year? Unfortunately, it does appear that "Jack the Giant Slayer" is flowing a near exact pattern that "John Carter" did, and I think instead of looking at a new trend of $200MM epics releasing in March instead of June or July, this might be the last we see of this stunt.

This weekend's overall numbers were at just over $68MM, making it the worst recorded weekend we've seen in a young 2013. Both 2012 and 2011 saw totals this low only once, though they were both in early September, the black hole of the box office year. Going back though just the last five years, this same weekend has seen totals of well over $100MM in each of them. The year is off to a terrible start, and we're going to have to hope that the summer blockbuster season and awards films at the end of the year both set record numbers as they did in 2012 to salvage any kind of respectability at the theaters. Unfortunately, I don't see either of those numbers matching up with what last year accomplished.

Anyway, "Jack the Giant" Slayer" still took the top spot this weekend, though it had little to no competition. Both "21 and Over" and "The Last Exorcism Part II" - the other two new releases this weekend - stuck in the top five, but both well under-performed, neither even hitting the $10MM mark. This weekend did see upticks from films like "Argo", "Life of Pi", and "Silver Linings Playbook", all three of which won a handful of awards at last weekend's Oscars ceremony.

Hit the jump for a full breakdown on the box office totals from this weekend.


"Jack the Giant Slayer", as mentioned following in the footsteps of last year's "John Carter", made $28MM this weekend, $2MM less than Carter's $30MM in its opening frame. Jack received a $195MM budget from Warner Bros., and even featured such stars as Ewan McGregor, Stanley Tucci, and newcomer Nicholas Hoult. Reviews have been incredibly similar for both films, as Carter holds a 51% rating on Rotten Tomatoes, while Jack is currently sitting at a 52% mark. Both films were initially set up for big summer runs, but both were both derailed with substantial script problems throughout production, which led to both getting pushed back to March. Both flopped, and without the beautiful effects that "John Carter" possessed, it will be tough for "Jack the Giant Slayer" to even reach the lowly numbers that Carter achieved a year ago. We'll see what this one has in the tank for future weekends, but odds are that this will have to perform incredibly well overseas to save face at all; my guess is still that this one becomes the joke of the year in terms of box office disasters.

Second place saw "Identity Thief", in its fourth weekend, drop only 30% and rack up another $9.7MM, becoming the first 2013 film to cross the $100MM mark. It now totals $107.4MM, which pairs nicely with its $35MM budget. There is little to no international presence for this film, but that doesn't appear to be an issue at this point. Even though the film has reviewed poorly, audiences are taking this over the alternatives.

While the overall list is pretty weak, the film now sits in the #2 spot on Box Office Mojo's Con Artist list, well behind "Catch Me If You Can".

The next two spots went to the other two new releases this weekend, "21 and Over" and "The Last Exorcism Part II", which made $9MM and $8MM this weekend, respectively. Both were expected to do about double this, but failed to connect with similar audiences from a year ago. "Project X" opened this same weekend last year and started with $20MM. "The Last Exorcism", while it released the previous fall, opened with $20MM as well. Luckily, both films had very small budgets that shouldn't create any issues for either of the studios moving forward. Relativity, which released "21 and Over", gave the film a $13MM budget. And while it hasn't quite reached that number yet, it seems very likely that the studio will at least double its money eventually. CBS Films gave the Last Exorcism sequel a raise from its last budget, way up to $5MM this time around. This one has already nearly doubled what the studio put into it, and even though this won't prove to be as successful as other recent micro-budget horror films, this is already good enough to ensure the trend will continue.

Rounding out the top five was last weekend's "Snitch", which made $7.7MM this weekend. That now brings the total for the film up to $24MM. No official budget details have been revealed, and I've seen everything from $15MM to $35MM for projections. Who knows where the total ultimately falls, but even on the high end, the film should at least make its money back over the next couple of weeks.

Outside of the top five, not one single film surpassed any major milestones. As mentioned in the intro - and this will probably be the last weekend that I reference the Oscar films - three films still stuck in the top fifteen spots, all making more money this weekend after winning their respective awards. That makes six of the nine Best picture nominated films which have crossed the $100MM mark in theaters, with "Zero Dark Thirty" at $93MM trying to join the club. Overall, the nine films have amounted for more than $965MM at the box office within the last year, closing in on the $1BB mark. While it's hard to relate this to previous years, as the majority of the modern era saw only five Best Picture nominees, needless to say, this is unprecedented territory, something we've never seen from major awards players before.

Check out the full numbers below, courtesy of Box Office Mojo: 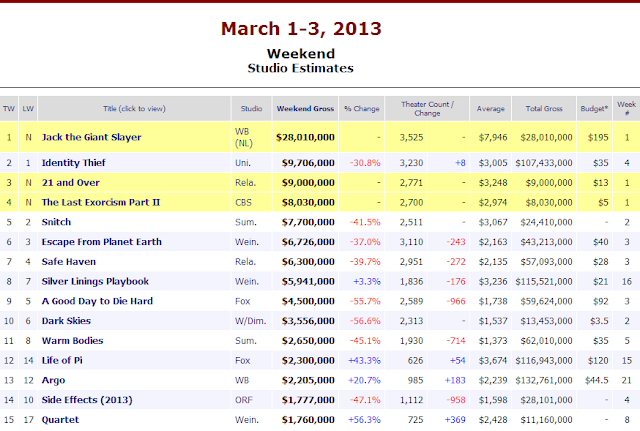