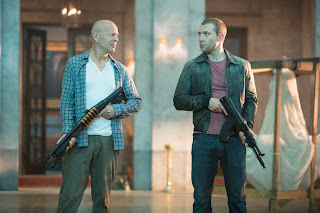 The good news? As We round into the second half of February, we're slowly seeing the box office start to pick up again. This week the top films were up $40MM from last weekend. The total of $139.2MM was still weaker than any of the first three weekends in January, but far and away better than the three previous February weekends. The bad news? There were better films in early February than some of the garbage releasing now. Folks, you have it backwards.

But March brings a new crop of films, and new hope. And with only one weekend left of February, we'll soon be able to put all of these films behind us and focus on what's traditionally a much more well-rounded grouping. That being said, March actually isn't looking a whole lot better right now, at least on paper... But we'll deal with that when we get there.

As for this weekend's films, "A Good Day to Die Hard" took the top spot, just edging out last week's "Identity Thief" and another new release, "Safe Haven". "Escape From Planet Earth" found itself in the top five this weekend, while the fourth and final new release, "Beautiful Creatures", left much to be expected.

Hit the jump for a complete listing on this weekend's numbers.

We'll start with "A Good Day to Die Hard", as it took the top spot at the weekend box office with $25MM. This was the fifth installment for the franchise, and recorded the second-highest opening total for the series, behind only 2007's "Live Free or Die Hard" - though, if we adjusted for inflation, the second and third films would surely wind up on top. Nonetheless, with so many other recent action films flopping terribly, no one at FOX is going to complain about this total. The film carries a $92MM budget which lines up similarly with the previous installment; an installment that went on to gross more than $380MM worldwide (this one has already recorded $79MM overseas).

Unfortunately, as I alluded to earlier in this post, this film scored considerably lower on Rotten Tomatoes than some of Willis' Expendables co-stars' recent ventures. "A Good Day to Die Hard" has so far recorded a 16% on the site, which is actually way up from where it was its first two days of release. Alternatively, "Bullet to the Head" and "The Last Stand" have recorded scores of 48% and 59%, respectively. Here's where our problem lies though: I am well aware of all of these numbers and statistics; I read reviews, I follow trends, etc. Yet of the three, I only went to the theater for one of them: "A Good Day to Die Hard". Why, you ask? Familiarity. I didn't like the last Die Hard film, and I didn't expect this one would be much better (and most likely, worse), but I knew this character, and the film looked like it had the chance to at least provide some cheap big-budget action. But I have to say - and I will discuss this further on our upcoming CinemaCast - the film was terrible. If I knew I wasn't planning on writing or talking about the film on this site, there were multiple points where I might have walked out. It was that bad. Reviews told me as much, but I still went anyway.

My point is, if you ever wonder why Hollywood continues to churn our sequels and remakes, this might be the best example I can offer. I knew it would be bad, but I went anyway.

Moving on. "Identity Thief" surprised a bit in its second weekend, dropping only 32% from last weekend's numbers and recording $23.4MM. This now puts the film at $70MM total, doubling its budget of $35MM. This is another film that's reviewed pretty terribly, yet it continues to make money. Unlike the previously discussed film, however, I did not see this one. The film is up to #5 on Box Office Mojo's Con Artist list, and should be in the top three by next weekend.

On to third and fourth place, where two new releases, "Safe Haven" and "Escape From Planet Earth" landed. "Safe Haven" had the much stronger opening, recording $21.4MM, but "Escape From Planet Earth" did just fine too with $16MM. "Safe Haven" knew what it was doing releasing Valentine's Day weekend, but at the same time, Nicholas Sparks is an established brand that women will flock to regardless of the holiday. This latest film recorded only $1MM less than what "The Lucky One" opened with last April. It's also worth noting that "Safe Haven" opened a full day early to catch Valentine's Day on Thursday, and managed an extra $8MM, bringing its four-day totals up to $30MM.

"Escape From Planet Earth" is a lesser-know animated film, which seemed to do okay for what it is. This one should hang around in theaters for a few weeks, and shouldn't have much trouble at all making back its $40MM budget.

In the fifth spot was "Warm Bodies", recording another $9MM this weekend. With that total, the film crossed the $50MM mark domestically. There's no official listing for the film's budget, but it's estimated at about $30MM. The film has added $17MM internationally, making for a worldwide gross of $67MM so far; more than doubling its budget. Also, the film now ranks in tenth place on Box Office Mojo's Zombie list. This one should also be in the top three by next weekend.

Outside of the top five, I'll quickly touch on "Beautiful Creatures", as it was releasing this week. The film made only $7MM this weekend (plus $3MM on Thursday), resulting in a total of $10MM. This falls well short of its $60MM budget, and if recent history tells us anything, it's that films missing on their opening weekends have been falling off the face of the earth in subsequent weekends (seriously, go try to find a film like "Bullet to the Head" on the charts - it's already fallen out of the top 50...). I never had much interest in this film, and it doesn't look like many other Americans did either.

"Silver Linings Playbook" is about one more day away from hitting the $100MM mark, which will make it the sixth Best Picture nominated film to do so (only "Zero Dark Thirty", "Amour", and "Beasts of the Southern Wild" failed to record as much).

That's about all I see this weekend. Check out the full numbers below, courtesy of Box Office Mojo: 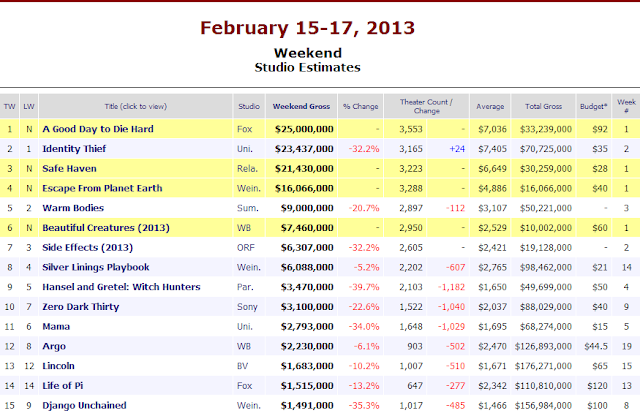