Posted by Unknown on January 16, 2013
For the latest edition of the Top 5 Movie Guide, we turn our attentions to the star of this weekend's "The Last Stand", Arnold Schwarzenegger. Austrian-born, Schwarzenegger is an actor, politician and businessman, who got his start as a bodybuilder. He was very successful, winning five Mr. Universe competitions and seven Mr. Olympia titles. As he eased his way into acting, he started out with a few misses but finally got his break in 1982's "Conan the Barbarian". Two year's later, it was James Cameron's "The Terminator" which propelled him into super-stardom. After that, Schwarzenegger was the go-to action star of that 80's and 90's. He continued his hot streak with films like "Predator", "Total Recall", T2, "True Lies", and even tried his hand at comedy with films like "Twins", "Kindergarten Cop", and "Junior". He continued to see his stock rise, even after turning down lead roles in films such as "RoboCop", "Judge Dredd", and that of John McClane in "Die Hard". 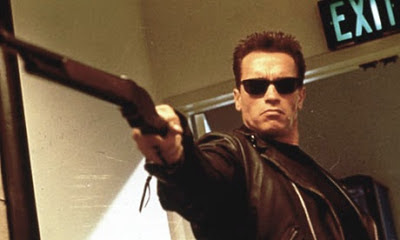 Let's briefly jump back to "The Terminator", as there are a couple of great bits from its production worthy of mention. First, Cameron originally wanted Schwarzenegger for the role of Kyle Reese, but after reading the script, Schwarzenegger suggested playing The Machine instead. Cameron insisted that Reese was the star of the film and that was the role he should take. But Schwarzenegger stood firm on his preference. The other is that his now iconic catchphrase "I'll Be Back" almost didn't make the film. Schwarzenegger did not like the line and thought it should have been, in a less focused effort, "I'll come back". This time, it was Cameron who insisted that the line was good. Both instances seem to have worked out for the best.

As the 2000's came, Schwarzenegger was in decline. The action roles weren't there anymore, and his film choices floundered. So, in 2003, he ran for Governor of the State of California and won. He held office for eight years until 2011. Much to the disappointment of movie fans around the world, his acting was put on hiatus while in office.

Thankfully, those days are over, as Schwarzenegger is again lining up film projects left and right. It might already be easy to remember that we'd not seen him on screen for nearly a decade, as he's so seamlessly transitioned back into the craft. But without a doubt, each of us here are strongly in favor of his renewed career. He was an icon for our generation, and hopefully he's able to regain some of that magic in his latter years. For now, hit the jump to see which of his titles made our lists!
Alex Schopp -
There are too many great movies in this filmography to narrow it down to only five. I did my best, but there are plenty of others that could have made this list as well.


I think the remake of this film last year only made me love the original that much more. It's a perfect blend of action, camp, practical effects, and sci-fi. It's cheesy in a lot of ways, but it's still awesome. I don't think I ever tire of watching it.


I know most will associate Schwarzenegger with the Terminator films in regards to his macho persona, but for me, I think I dig the action a bit more in this film.


Probably Schwarzenegger's most iconic franchise. You could argue that the writing is a bit stronger in the first installment, but I think this film is more enjoyable overall. I love the T-1000 machine, and Arnold shows a bit more personality this time around.


A perfect blend of humor and action. A very enjoyable film to watch, though it's Bill Paxton that puts this one over the top.


It was so hard for me to include this film with so many other great action films at my disposal, but I just couldn't overlook the buddy comedy films that Schwarzenegger also tried his hand at. I'm not sure people outside of our generation will get nearly as much out of these, but I had to put it on here. It's a classic.


Ben Foutch -
One of my favorite actors growing up. The man knows action.


May be a perfect film. Never gets old.


Saw this in theaters and not ashamed to admit that I cried at the end.


It doesn't get much better than this, folks. Campy one-liners, awesome score, Arnold kicking ass, and it doesn't hurt to have a cheesy workout video by Captain Freedom.


Such a fun sci-fi action romp. Kuato Lives! - well, not in this scene at least.


Good blend of comedy and action. This is how you do the comic relief sidekick right, Hollywood.


It feels weird putting this at number one because, like The Expendables franchise, there's no way the movie would work if it wasn't for every other Arnold action movie that came before it. But it's watchability is so high for me that I have to put it here.


This works so well because of it's predecessor. While the movie gets a little goofy at times, it's interesting to see Arnold perform such a polar opposite role than what he previously played in the franchise.


I was always in awe of this movie as a child. The only way I can describe it is ethereal action.


When a team of tough guys gets whittled down to one, you're glad Arnold's the one left.


I actually think this is the best movie in the franchise, but Arnold's work is a bit shinier in Judgment Day. Plus there's that whole watchability factor. I can't believe "Total Recall" isn't on my list.


Nathan Hinds -
Before I started caring about acting ability, and before he quit acting to dabble in the whole political game, Arnold was always my favorite actor. Now that's not me knocking his acting abilities, I just actually take it into account now whereas I used to only care about who could look the most bad-ass and also be funny. In those regards, can anyone top Arnold? The top three films on my list could easily be argued for my Top 10 films ever.


This film is in my Top 10 right now, and it's never leaving it. It's Arnold's most iconic role ever, and is in my not-so-humble opinion, the greatest action movie of all-time.


I'm almost positive that I've watched this movie more times than any other movie. Also, I just realized I made a huge mistake by previously stating that "The Bourne Ultimatum" is my favorite Spy Movie. Nope, it's this, and it isn't even close. My bad.


I've said it before, but in case you've forgotten, of all the movies that have ever held the title of being my favorite movie, this one held it the longest.


Derek made some comment about there being references to "Amadeus" in this movie. I've seen "Amadeus" and nothing comes to mind, but I hate "Amadeus" and will probably never watch it again to see what he's talking about. I'll watch "Last Action Hero" anytime though.


This movie ultimately made the cut because it's like my ultimate dream: cloning perfected so that you could be cloned without even realizing it. That's right folks, I want to have the option to live forever. I can't believe so many movies portray that like it's a bad thing.


This is my #1 on sheer chance today. I mean, I love this movie, but if you switched it with my #2 or #3 selections I would be okay with it.


Amazing movie. I highly recommend it if you haven't seen it. The definition of an action/sci-fi film.


One of my all-time favorites. I have loved this movie for a very long time.


Yeah, yeah, I get it. Why not "Predator" or "Commando"? Well, the fact of the matter is that the nostalgia of this movie just puts it in my list.


I have to give props to the DeVito-Schwarz combo. This is a great movie full of good comedy and amazing chemistry. Rumor has it that there is a "Triplets" coming out to sequel this - I can't wait!


Well there we have it, folks. A pretty great assortment of films above, twelve different titles in total. Seven received multiple selections, though the film receiving the most votes should come as little surprise. "Terminator 2: Judgment Day" was the only film this week to appear on all five list, also earning two first-place votes. This apocalyptic epic gave audiences one of the most iconic characters in film history. No surprise that this film is heralded as one of the greatest action films of all-time, either.

No film received four selections this week, but three managed three (that's just a phonetically great sentence there). "Total Recall", "Predator", and "True Lies" all managed the second-most picks this week, with the first two titles also picking up one first-place vote. Again, all action films, some providing a good bit of comedy and camp as well. All three deserving of this placement on this list, and all three definitely worth a watch if you ever failed to do so.

Finally, it was "Last Action Hero", "The Running Man", and "Twins" that rounded out our titles with multiple selections, each receiving two. Quite the hodgepodge of films here, as we really delve into the camp and comedy department. Each of these are entertaining though, and at least two of us above found all three worthy of mention.


As always, we hope that each of these selections helps you to expand your knowledge and appreciation of some of the best films that Arnold Schwarzenegger has provided over the years, and guides you to better and more enjoyable all-around viewing experiences.