It was a good weekend for actress Jessica Chastain, who saw both of her starring movies take the top two spots at the box office. Her newest release, the horror/thriller "Mama", took the top overall spot, while her war drama "Zero Dark Thirty" finished significantly behind, but still good enough for second place.

A couple of longtime box office icons didn't fare nearly as well as many hoped or expected. Russell Crowe and Mark Wahlberg's "Broken City" managed the top five this weekend, but failed to hit the $10MM mark. And Arnold Schwarzenegger, in his first starring role since his return to acting, managed even less traction with "The Last Stand", barely squeaking into the top ten. Overall, it was clear that a mix bad reviews and a hotter (I meant in terms of current acting projects, but we know we can apply this the other way, too) Jessica Chastain was more intriguing to most moviegoers.

David O. Russell's "Silver Linings Playbook" also had a nice showing this weekend as it continues to boost its theater count on the heals of a Best Picture nomination.

Who else saw "Mama" hitting with $28.1MM this weekend? Was this an expected thing and I was on the outside, or did this jump up and surprise everyone? It never seemed like a stretch to imagine this ending in the top spot this weekend, I just didn't expect by such a wide margin. Kids love their horror movies though, and the film releasing on the coattails of Chastain's Academy Award nomination and Golden Globe Award win was brilliant marketing. The studio couldn't have drawn up a better scenario than this.

Overall, the film has managed only a 63% on Rotten Tomatoes, but that's not terrible for a horror film. And while $28MM doesn't seem like an excessive amount, for the month of January it's actually quite good. The film recorded the ninth-highest opening weekend ever for the month ("Cloverfield" sits atop that list with $40MM), and landed in the top ten of the best opening weekends of all-time for the Horror genre. Unfortunately, I was unable to get to this film myself this weekend, but I do look forward to hearing more about it from my colleagues on this week's CinemaCast.

In second place this weekend was the other Jessica Chastain thriller, "Zero Dark Thirty". ZD30 is in its second weekend of a wide release, and continues to pull in large audiences. The film added $17.6MM this weekend, bringing its total haul up to $55.9MM. The film has now well exceeded its budget of $40MM, and should remain strong through at least the rest of the month. Not only has the film garnered amazing reviews, it's also stirred up much controversy, leading to the film being a must-see amongst most social groups.

Third place went to a film in a very similar place to ZD30, "Silver Linings Playbook". This film too continued its box office expansion, and picked up $11.3MM this weekend. The film has now almost mirrored ZD30's total gross, so far pulling in $55.3MM itself. This film, however, had only a $21MM budget, passing that by weeks ago. The film has also done incredibly well amongst critics, and too is reaping its current success from a Best Picture nomination two weeks back.

In fourth was last weekend's "Gangster Squad", picking up $9.1MM. The film has now grossed $32MM domestically, which still falls well short of the $60MM budget it incurred. The film should eventually hit that mark, but probably not by much more. While I enjoyed the film quite a bit myself, it's received pretty negative reviews from critics, surely leading to a deflated box office. The film now moves up the 12th place on the best of True Crime films, and shouldn't have much trouble reaching the top six of seven in the next few days. Otherwise, I wouldn't expect much of note from this film.

Rounding out the top five was the new release "Broken City", which earned $9MM. The thriller stars Mark Wahlberg, Russell Crowe, and Catherine Zeta-Jones, but failed to connect with audiences on name recognition alone. Reviews have been dismal for the film, currently sitting at a 24% on Rotten Tomatoes. This one will probably disappear in a hurry - honestly, with reviews this bad I'm amazed it did this well. The film's budget is $35MM, and we'll see if it's able to scratch and claw its way to that number. If the film manages to pick up anything at all overseas, it should probably be fine, but I doubt it'll be by much.

More surprisingly, to me at least, was the poor(er) showing by Schwarzenegger's latest, "The Last Stand". The film finished in tenth place this weekend, managing only $6.3MM. Reviews were mixed, but still seemed decent enough for an action flick. No budget was reported for this film, so there's no way to know how it compares on that front, but either way, studios were surely hoping for much more from the first film Schwarzenegger has starred in since 2003. This doesn't bode well for the direction we're moving with our aging action stars, as the trailers for Sylvester Stallone's "Bullet to the Head" and Willis' latest "A Good Day to Die Hard" look equally uninspiring. If all three flop in the next month, this landscape could change much quicker than expected. If you have any affinities towards these stars and their films, get your viewings in now while you can; I'm not sure we'll see many more films like this moving forward.

In other films of note, "Argo", "Life of Pi', and "Lincoln" all got small expansions this weekend, as they too try to capitalize on their Best Picture nominations. "Argo" has done the best so far through the other award circles, winning Best Film at the Critics' Choice Awards and Best Drama at the Golden Globe Awards. We'll see what it can do with the Oscars next month, but it's no surprise it got a limited re-release this weekend. The film is now up to $114MM, which still falls short of the $160MM made by "Lincoln" (most of any Best Picture nominee this year).

Quentin Tarantino's "Django Unchained" reached the $138MM mark this weekend, surpassing the "The King's Speech" ($135MM) as The Weinstein Company's most successful film to date. As you'll notice, along with "The King's Speech" - the 2010 Best Picture winner - "The Artist", last year's winner, also sits in the top ten. An omen for Django? We'll see...

That's about all I have this weekend. Check out the full rundown below, courtesy of Box Office Mojo: 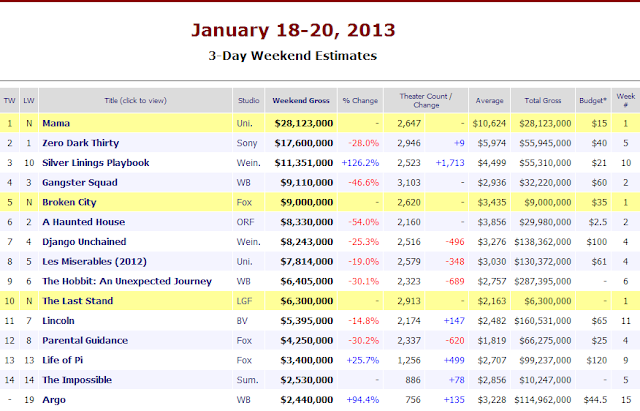