Posted by Unknown on December 12, 2012
For this edition of the Top 5 Movie Guide, we turn our attentions to one of the stars of "The Hobbit: An Unexpected Journey", Cate Blanchett. Blanchett was born in raised in Australia, where she eventually graduated from the Australian National Institute of Dramatic Arts. In little over a year after graduating, she was already garnering critical and popular acclaim. She first started working with the Sydney Theatre Company, and in a couple of different roles managed to win the Sydney Theatre Critics Circle awards for Newcomer of the Year and Best Actress - to date she is still the only performer to ever win both awards in the same year. 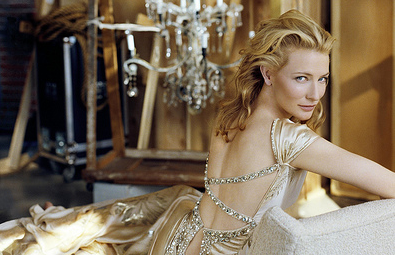 In the following years she went on to appear in a variety of Australian feature films and American television shows, but it wasn't until her breakthrough performance as Queen Elizabeth in "Elizabeth" (1998) that things really took off. She was nominated for her first Academy Award for the performance and never looked back. 2001 was one of her busiest years ever, appearing in four different films, including the first from the Lord of the Rings trilogy (fun fact: always wanting to appear in a film wearing pointy ears, after production wrapped on the trilogy, she had her ears bronzed). In 2004 she won her only Academy Award for her supporting performance as Katharine Hepburn in Martin Scorsese's "The Aviator".

She's been nominated for a total of five Academy Awards to date, and is one of only 10 different actors to be nominated for Supporting and Lead Acting awards in the same year (Blanchett accomplished this with her performances in "I'm Not There." and "Elizabeth: The Golden Age"). She's the only actress to ever be nominated for Best Actress for the same role in two different films (this was, of course, for her work in "Elizabeth" and "Elizabeth: The Golden Age"). She's also appeared in seven films that have been nominated for Best Picture, an amount that no one else has matched.
As a final fact to end the introduction portion of this post: one aspect of Cate Blanchett's personality that resonates well with this group is that she is an avid list maker. She enjoys making lists for just about everything she can. This is a trait all of us here can definitely relate to.

Alex Schopp
Cate Blanchett is one of my favorite actresses. About five years back I got really into her and made it a priority to watch every film from her filmography (thank you, Netflix). It's nice to put this list together knowing I've seen nearly everything she's ever made, but I hate how much I had to leave off. There's so much more I want to plug.


Even for selections below that I thought could challenge these films for the top spot (I'm not the biggest LOTR fan), you just can't compete with the epic nature of these movies. They're such a cinematic achievement that you have to reward that. Trying to make arguments for anything else is pretty tough to do.


This would have been the only thing close to competing with LOTR. I remember seeing these films and being blown away by how powerful Blanchett was. This may have been the series that started my infatuation with her.


This movie is pretty long, and after a first viewing, aspects can be a bit of a chore to get through, but the quality is all there. I've still been able and interested to watch this film multiple times, so there is definitely some watchability. Plus, Blanchett really nails her role.

4. Indiana Jones and the Kingdom of the Crystal Skull (2008)


It's only been a few years, but already I think this film is aging better than many expected. I enjoyed this film since the start, but I feel like this film will one day be able to slip pretty seamlessly into the Indiana Jones franchise without people looking at it like the plague. Cate Blanchett was one of my favorite parts of the film - I loved her.


I actually came across this one when I was going through all of Matt Damon's filmography. I really enjoyed the entire film, and I thought the whole cast was great.


I regard this trilogy as cinema's greatest achievement to date. Out of all three LOTR movies, The Fellowship of the Ring is where Blanchett really shines. Plus I love her opening narration knowing she was there for all of that history.


This is the movie that started my interest in costume dramas.


While the movie scores low on watchability, she undeniably knocks it out of the park as Katharine Hepburn.


A wonderful addition to Wes Anderson's library of unique characters.


Nathan Hinds
She was in 'The Lord of the Rings'. That means she's awesome.


I think this movie is really underrated. I wish they would do more; unfortunately, the cast is too old to do an origin story.


You cut about 20-30 minutes out of this movie and it would be so much better. Still a great film, just not a lot of watchability.


I love this movie. All the characters in it are so good and it translates into a great watch. It's still an exciting period drama even though I've seen it many times.


I am enjoying this movie more every time I decide to slap it in the ol' DVD player. Her part in it is one of the, like, ten reasons why I keep enjoying it more.

5. Indiana Jones and the Kingdom of the Crystal Skull (2008)


Go ahead, people. Tear me apart for this one. Do I love this movie? No. But I do like a lot about it. The return of Marion, for instance, is fantastic.


That's right, folks, add other film (or, in this case, films, I suppose) to the Slackers Shrine! For the first time ever, an entire trilogy ("The Lord of the Rings: The Fellowship of the Ring", "The Lord of the Rings: The Two Towers", and "The Lord of the Rings: Return of the King") has made its way in. With all five writers selecting the entire series as their top selection, it earns enshrinement, joining the likes of "Batman Returns", "The Shawshank Redemption", "The Big Lebowski", and "Cast Away" in immortality. If you haven't yet sat down to the extended editions of the LOTR Trilogy (that comes in at about 12-hours total, so clear your schedule!), it's about time to do so.

One important fact to keep in mind: just as the case with all films that are enshrined, this now takes away all three films from being considered for any future lists. While we'll always make sure to point out their inclusion in the Shrine on any lists where they could be a consideration, these films are now retired and you won't see them appear on a single list ever again (outside of possible group Top 10 lists).

As for the other titles appearing above, there were actually seven more films that each received at least two picks. Martin Scorsese's "The Aviator" was the lone film to grab four votes, while "Elizabeth" grabbed three. Otherwise, "Bandits", "Indiana Jones and the Kingdom of the Crystal Skull", "The Talented Mr. Ripley", "The Life Aquatic with Steve Zissou", and "Robin Hood" rounded out the bunch, each earning two picks apiece.

As always, we hope that each of these selections helps you to expand your knowledge and appreciation of some of the best films that this Cate Blanchett has provided over the years, and guides you to better and more enjoyable all-around viewing experiences.