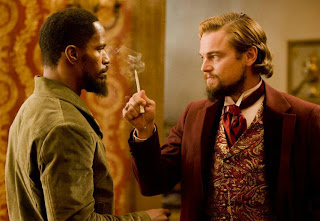 Revenge cinema thrives in the guilty pleasure part of our film culture, as there is something regretfully cathartic and primal about getting even - especially if the villains are portrayed in such a way that elimination is a very strong albeit morally grey imperative. Judging by the popularity of these sorts of films, as a society we seem to be empathetic towards characters like Django, often finding emotional satisfaction from their violent retaliation and vengeful endeavors. This is why there will always be a market for this type of film, and part of the reason why Django Unchained succeeds as a compelling story about exploitation, murder, and greed. It is an ugly truth, but so is the history of mankind.

The story is rather simple. It follows Django (Jamie Foxx), a former slave, and his bounty hunting savior, Dr. King Schultz (Christohp Waltz), as they reap the rewards of slaying "evil" men for cash while progressively working towards finding and saving Django's wife, Broomhilda (Kerry Washington), who is a slave of Calvin Candie (Leonardo DiCaprio). They devise a plan in which they present themselves as men attempting to enter the Mandingo circuit, which Candie is a successful entrepreneur of. Posing as enthusiasts of the abhorrent sport of to-the-death slave-fighting gives them the chance needed to infiltrate Candie's plantation and legally purchase Broomhilda. But they are not as smooth as needed for the job. One of Candie's oldest house slaves, Stephen (Samuel L. Jackson), has some suspicions about the duo.

This could have turned into one of the most awkward films of the year, and a stain on some otherwise reputable careers. But, it is evident from the performances that the entire cast relished in the odd amalgam of powerful drama and at times, skit-like comedy. While delivering some memorable and often hilarious performances, they seem to have brought the right amount of depth needed for these characters. Foxx showed great range in his portrayal of Django, displaying a confidently stoic demeanor that covers a passionate and vulnerable interior, and was probably one of the more subdued performances in the film. Waltz easily stole the show, however, as he expertly delivered lines of dialogue like a seasoned musician improvising over a favorite chord progression. Was he born to star in Tarantino films? DiCaprio seemed to have fun as a slimy plantation owner and was extremely menacing at a certain dinner scene, though his accent seemed to noticeably suffer.

Usually, Tarantino's work gets criticized for overly drawn out dialogue, which was fairly apparent in Inglourious Basterds, but he seems to make every scene work here while never feeling bloated, which is extremely impressive considering the lengthy run time.  While the pacing was exceptional, it did seem weird how straight-forward the narrative structure was in comparison to the rest of his filmography. But, that's not necessarily a bad thing because it still retained his signature style and unrestrained attitude.

The mix of action/suspense, tongue-in-cheek camp, graphic violence, and controversial content served in Django Unchained is exactly what you would expect from schlock maestro Quentin Tarantino. Truthfully, it could easily be considered the most brutal film in his career, as it never flinches from the ugly injustices and acts of violence that human beings are capable of inflicting upon one another - yet it never takes itself too seriously. Maybe it was this honest approach combined with the morally stunted and flamboyantly sadistic antagonists that make it one of the best films of his career, and possibly one of the most entertaining of the year. 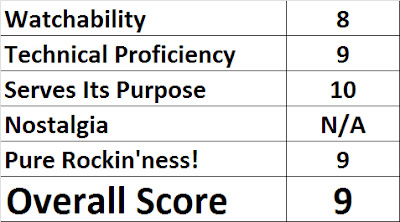