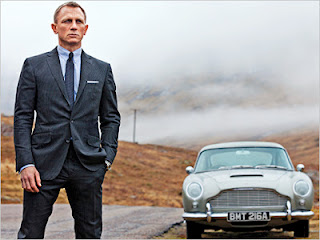 I think we all knew the box office numbers were going to be low this week. "Playing for Keeps" was the only film releasing in a wide variety, and last week's crop wasn't looking much better - "Killing Them Softly" was the only wide film there. Even a few weeks beforehand you could look at this weekend, put 5-10 films in a hat, pick one out as the weekend champ, and it would be believable.

The Top Five all ended up being within $3MM of each other, though none performed exceptionally well. The overall numbers were down more than $30MM from last weekend, which was already the lowest totals we'd seen in over a month. Failing to break the $80MM mark overall, this was the lowest the box office has been since September 7, when "The Words" released and "The Possession" ended up in the top spot. That was the only other weekend all year where we were this low.

Next weekend sees "The Hobbit: An Unexpected Journey" come to theaters, so that will be a guaranteed boost for numbers over the next couple of weeks. And with Christmas right around the corner, things figure to pick up in general.

For now, hit the jump for a breakdown on this weeks numbers and to see where everything fell.

As mentioned, the film ending up on top this weekend was "Skyfall". It's in its fifth week, and still managed $11MM. The film continues to be a juggernaut both domestically and overseas. Last week I went over many of the specifics of where this film matches up in comparison to other Bond films and films of 2012 in general. Just as a quick update, it's now up to $260MM domestic and $656MM internationally, bringing the worldwide totals up to $918MM. It's up over $100MM now as the best James Bond film ever in the U.S., and up over $300MM on the second-place film worldwide.

It's well clear of its $200MM budget, and all that's really left at this point is to see if the film can break the $1BB mark - a task that seems less likely after the totals this weekend, but I'm hoping it can manage it.

"Rise of the Guardians" took advantage of the slow week and jumped up to the #2 spot in its third week. The film grabbed $10.5MM this weekend, and suffered the smallest drop of any film in the Top 15 (21%). The film really grabbed audiences as well as many imagined, now with only $61MM domestically in three weeks time. It's managed $90MM internationally, which brings its worldwide totals up to just over $150MM, which just clears its budget of $145MM. The film has received solid reviews, if not overwhelming, and will probably benefit from the upcoming holiday season. This one should be in the top two or three throughout the rest of the month.

Matching it up against other DreamWorks Animation pictures, it still has a long way to go to be considered anything of a hit. It currently sits outside of the Top 20, and is behind films like "Flushed Away" and "The Prince of Egypt". It's still early, but even with the strong voice-cast that this film had to offer, it looks as if it might fail to live up to lofty studio estimations.

"The Twilight Saga: Breaking Dawn Part 2" took third this week, with a total of $9.2MM. It's now made $268MM domestically and $482MM overseas, bringing its worldwide totals up to just over $750MM. It's still about $30MM behind Eclipse for the highest-grossing Twilight film domestically, but it has overtaken Breaking Dawn Part 1 and is now the highest-grossing Twilight film worldwide. The film also leapfrogged "The Amazing Spider-Man" to become the fourth-highest grossing film of 2012. While it will continue to add to its numbers, it seems like its place is now set, as it would need more than $140MM more to surpass "The Hunger Games" for third place.

In fourth this weekend was Steven Spielberg's "Lincoln". The film made $9.1MM in its fifth week, and now sits at just over $97MM domestically, and only days away from breaking the $100MM mark. As expected, there still aren't any numbers internationally, so the domestic totals are all this film has to work with. Its budget was only $65MM though, so it's already well clear of that. This one doesn't stack up great on any best-of box office lists, but anytime a film like this can break the $100MM mark, you know it's doing something right. I wish I could have got there this week, as it will now surely hit the benchmark unceremoniously sometime during the week.

Rounding out the Top 5 this week was "Life of Pi", which made $8.3MM in its third week. It's now broke the $60MM mark domestically and is at $105MM internationally for a $165MM worldwide total. The film has a budget of $120MM, so it will surely hope to make up ground on the domestic end of things, but overall, it is already clear of those numbers. This is another film that will probably benefit from the family holiday season this month and should hang around in the top five or so throughout the rest of the month. I just saw the film this past weekend and was pleased with it. Overall it's made more for families and young children, but it was a very well-crafted film. I'd gladly recommend this to anyone still on the fence about seeing it. If you're going to see it at all, it should be in the theater.

Outside of the Top 5, "Playing for Keeps", the lone new release this weekend, finished in sixth-place with $6MM. The film has reviewed terribly so far - only one positive review amongst nearly 60 on Rotten Tomatoes. No budget is listed for this film, but I can't imagine it's much. I don't think anyone really expected much from this film, and my guess is it doesn't even crack the Top 10 next week. If it manages to break $25MM in its theater run, it will be a success.

Otherwise, nothing appears to have hit any notable milestones this week, so we'll just leave it at that. Be sure to check out the full numbers below, courtesy of Box Office Mojo: 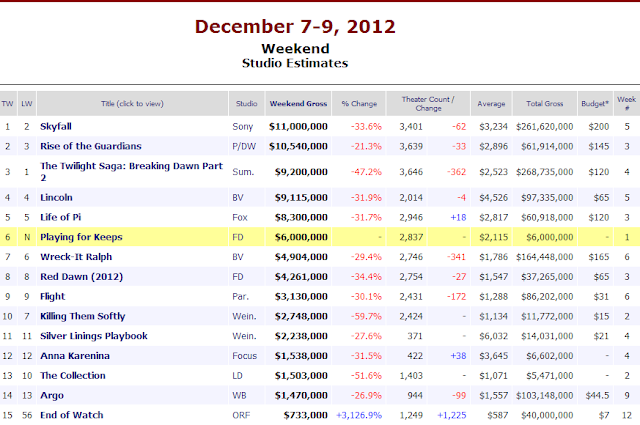