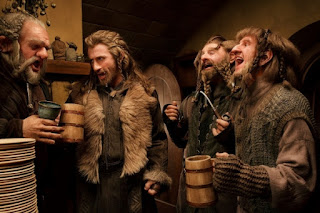 As expected, the overall box office numbers were up a bit this week thanks to the holiday season still in full swing. The total numbers this weekend topped $180MM, the most we've in this month of December. We knew the dollars would be there, there just wasn't a clear picture as to where there would filter.

I was spot-on with my projections putting both "Les Miserables" and "Django Unchained" in the $30MM range, though the order they finished surprised me some. I expected, with its larger audience appeal, Les Mis to win out by a few million, but it was actually Django that made a touch more. But, all of that becomes null and void in this circumstance, as the surprise this week was Peter Jackson's "The Hobbit: An Unexpected Journey". Last weekend the film made $36MM, and going into its third weekend - facing both Les Mis and Django in their first weekend - I expected strong numbers, but nothing capable of hanging with either of those two. But, with only a 10% drop from last week - that's right, 10% - The Hobbit managed nearly $33MM this weekend, grabbing the top spot for the third week in a row!

Just about every film in the top ten looked strong this week, so hit the jump for a full rundown on all the numbers, including a few notable milestones that a couple films reached.

I'll start with The Hobbit, as it completely surprised me in taking the top spot this weekend. With it's $32.9MM, over three weeks its now made just over $222MM domestically. That's an impressive total after feeling like it was falling a bit below expectations for the first week or so. But it's continued to chug along, and has not let up since day one. Add in facts like this is still the film being shown on the most screens in the country (4,100), and the increased pricing for 3D, IMAX, and the high frame rate, and it's easy to see how it continues to post strong totals. The film has also now made $464MM internationally, combining for a worldwide total of more than $686MM. It's still well below all three of the Lord of the Rings films both domestically and worldwide, but as it's only in its third week, it does still seem there's time for it to make up some ground.

It's currently the eighth-highest grossing film of this year, and should be able to work its way into the top five by the time all is said and done.

In second place, in what seems like a mini-victory for the film, "Django Unchained" finished with $30.6MM, edging out Les Mis for second place. Both of these films opened on Christmas Day of this past week, but this was still the first official weekend release for them. Django finished Christmas Day with the third-best opening ever ($15MM), $3MM behind Les Mis for second. Combining all of those numbers with what it made this weekend, it's now surpassed $64MM domestically. No international numbers are in yet for the film, and honestly I'm not sure how well this one will play overseas. Quentin Tarantino is a popular director across the globe, so I would imagine this will at least resonate in a few countries. We'll have to wait and see though.

The film has an estimated budget of $100MM, and it won't have any problems at all besting that. The film has reviewed incredibly well so far, and is one of my favorites of 2012.

In third was the aforementioned "Les Miserables". This one made $28MM this weekend, bringing its domestic total up to $67.4MM now. It has received some international play already, with $48.7MM coming in this weekend. Currently at 72% on Rotten Tomatoes, this one has reviewed fairly well, too. From our end, we've received a mixture of responses so far. Dan Foutch, who reviewed the film earlier this week, gave it a rave response. However, our own Nathan Hinds had some different opinions on the film, of which you'll be able to check out on this week's upcoming CinemaCast.

Regardless of response though, from a numbers standpoint it's doing quite well. It's already surpassed its budget of $61MM, and while there's still a long road ahead of it, it's already the eleventh-highest grossing live-action musical of all-time (not accounting for inflation).

In fourth place this week it was "Parental Guidance" with $14.8MM. It too is in its first weekend, also opening on Christmas. It's now made $29.5MM domestically and another $6.5MM internationally for a total gross of $36MM. With a budget of $25MM, it's already ahead of that, which is good. I have little interest in seeing this family-friendly film, but at least the cast looks good on paper. As expected, no other notable totals for this one, nor will there probably be so in the duration of its theatrical run. Being a family film it should produce some decent numbers for at least the next few weeks though.

Rounding out the top five was "Jack Reacher", which managed $14MM this weekend, and like The Hobbit, also suffered only a 10% drop from last weekend. This was another surprise to me. The film has had a decent critical response, and I even went and checked this one out (it was enjoyable). In two weeks, the film is now up to $44MM domestically and $22MM internationally. Its worldwide total has surpassed its budget of $60MM, and I get the feeling that this one will continue, at the very least, to play well overseas for a while.

Outside of the top five, the next four films on the list - "This Is 40", "Lincoln", "The Guilt Trip", and "Monsters, Inc. 3D" - actually made more money this weekend than last. All of those films but one were in their second weekend, so with the holiday bump, the increase wasn't completely unexpected. But for one, Steven Spielberg's "Lincoln", now in its eighth week, the increase was very impressive. That now puts the film at just over $130MM domestically, very strong numbers for a film of this nature, as it makes its push to awards season.

Otherwise, "Skyfall" stands out as needing a bit of recognition. The film finally opened in China this weekend, and those international sales helped push the film over the $1BB mark. It's now the 14th film to ever hit that number, and needs only $4MM more to surpass "The Dark Knight", the film one spot ahead of it. I don't expect it will come close to the $2.7BB that "Avatar" made, probably falling about $1.6BB short, but nonetheless, it's in good company and this is an impressive mark for the film. It also now needs just $11MM more to hit the $300MM mark domestically, though it's already pretty nestled in as being the fourth-highest grossing film of 2012.

That's about all I really see though. Lots of films did really well this weekend, and I think more than anything, as we conclude the final week of 2012, its nice to see the total numbers for the year up more than $600MM from last year. And yes, you're going to see an increase nearly every year due to ticket inflation, but what's nice here is that we've seen more total tickets sold this year than the previous three. 2009 was the last time ticket sale numbers were higher than this year. So while you can still see room for improvement, things took a positive step in the right direction. And with each passing year, as piracy and VOD becomes even more common, seeing ticket numbers rise is very nice to see.

Here are the films in the top fifteen this weekend, courtesy of Box Office Mojo: 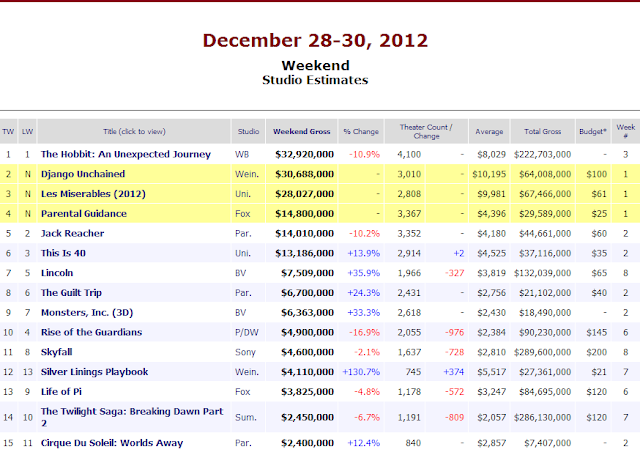