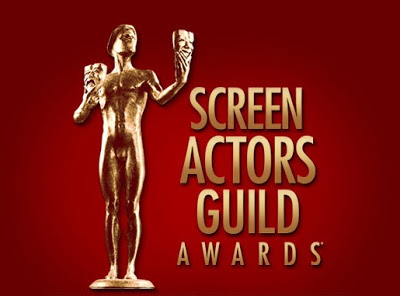 In the first big awards junket of the season, the nominations for the 19th Annual Screen Actors Guild Awards have been announced. For those unfamiliar, The Screen Actors Guild (SAG) is a union entirely comprised of working and retired actors - with more than 100,000 members, just about anyone who's ever performed in a sanctioned Hollywood film is a member. The awards themselves are voted on by all members of the Guild, making them by far the largest constituency of voters for any awards organization.

The only televised awards shows to exclusively honor performers, it presents a total of thirteen awards for acting in film and television. The awards focus on both individual performances as well as on the work of the entire ensemble of a drama series and comedy series, and the cast of a motion picture.

As we here tend to focus solely on the movie-end of the industry, I'll only highlight the seven film nominations below. Feel free to check out the SAG Website for a full rundown on all of the categories and nominees, but otherwise, hit the jump for a quick listing on all of the film nominations and some quick thoughts on the overall selections. As reference, we will be talking about the awards in greater length on next Tuesday's CinemaCast; for now, this should get you through the week!

We've already seen a handful of critic associations detail their favorites of the year, but this is really a first look into the personal end of the circuit. And as many of the members of this Guild are also members of the Academy of Motion Picture Arts and Sciences (AMPAS), it's worthwhile to get an initial vibe for what this mass is favoring.

I'll just start with the actual nominees as there aren't very many, and go over some of my thoughts at the end. Look them over and see what you think. Most of these are pretty much what we could have expected, though a few selections definitely stood out more than others.

Outstanding Performance by a Cast in a Motion Picture


As mentioned, most of the actors and films presented above are what we expected. The first award, that for Outstanding Performance by a Cast is kind of their informal award for 'Best Picture'. Obviously you're going to see a favoring of films with extended casts and established actors, so not seeing a film like "Life of Pi" anywhere in that mix doesn't mean much yet (if that's a film you're keeping an eye on). Four of the five nominations don't surprise me one bit, but "The Best Exotic Marigold Hotel" sheds a bit of light on how well that film has been received. I'm not sure what else slots in there instead, but "Zero Dark Thirty" or "Moonrise Kingdom" would have seemed more expected to me. Marigold Hotel does feature a handful of respected senior actors, however, most all of which are surely regarded pretty highly amongst most voters. So this one still makes sense.

The Male and Female Lead Actor nominations are all pretty straight-forward and expected as well. I heaven't heard much buzz for Helen Mirren, and I would have loved to see Quvenzhané Wallis from "Beasts of the Southern Wild" sneak in there instead, but she might not be a member of this Guild yet, and thus would be ineligible. Keira Knightley in "Anna Karenina" could have been another popular selection.

As for the Supporting nominations, only one selections in both categories surprises me: Javier Bardem on the Male side for "Skyfall", and Nicole Kidman on the Female side for "The Paperboy". I'm not really sure who would have slotted into the fifth spot amongst the men, and Bardem's role has been picking up steam over the last few weeks, but it's still cool to see it actually amount in a nomination amongst such a large group. We'll have to see if his momentum here can carry him through to an Academy Awards nomination. And as for Nicole Kidman, this is probably the most intriguing selection of the entire group. I still haven't seen "The Paperboy" yet, but I have wanted to for a while. Critical reception was very underwhelming for the film, and to this point, not many had this one on the radars for any awards. It does seem like there's an opening in the fifth spot for someone else to sneak in, so maybe Kidman getting out in front here will help with her familiarity come Oscar time. I think this ends up being more of an isolated thing, but as Nicole Kidman is one of my favorite actresses, I'd love to see her snag another Academy Award nomination.

I'm amazed that we don't see "The Avengers" in the Stunt Ensemble category, but I really don't know the insides of that department. I'm sure there's a good reason why the stunt actors of that film did not get recognized over a few of those others.

In closing, really there's not a lot here that wasn't expected. Most of these names will translate through the entire awards circuit and culminate in Oscar nominations. At this point, there are a few names that stand out, but I'll be more interested to see the winners of these than just the nominations. The top three categories, for instance, all could go multiple ways, and I'll definitely be curious to see which actors/films get the first bump as we start our sprint towards the finish line.

Anything outside of the names I mentioned surprise you? Who do you think will win?
Alex Schopp Awards