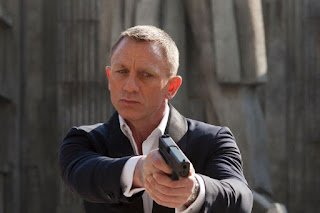 Well it's nice to see a highly-anticipated film exceed expectations for once. As the 23rd installment in the James Bond franchise, "Skyfall" did just that. The film had remarkable, record-setting openings overseas in the previous two weeks, so it shouldn't have come as much of a surprise that the film continued with the trend and broke more records here in the States. It wasn't the strongest opening ever in the month of November (you can thank the Harry Potter and Twilight franchises for that), but it does look mighty impressive lined up next to the other opening totals from the Bond series.

Thanks to "Skyfall", we saw a huge uptick in overall box office numbers, a total that hasn't been approached since mid-July. "Wreck-It Ralph" and "Flight" provided strong totals as well, helping to contribute to the cause - though they were both pretty much in-line with what we expected from their week-two totals.

Before I jump into any numbers on "Skyfall", I just want to point out that with a total theater gross of $171MM this weekend, that is the most money we've seen come through the theaters in a three day span since July 20th, when "The Dark Knight Rises" released. I'm always glad to see the theaters do well, so this was definitely a welcomed surprise this weekend.

"Skyfall" made $87.8MM this opening weekend, and pairing that with the $2.2MM it made on Thursday in a limited IMAX preview, that brings its total to a neat $90MM. It can already add $428MM to its total from its international grosses, bringing its worldwide totals up to just over $518MM. And we've only seen the film for three days. As I stated in the intro, the film will have to settle for seventh on the November Opening list, behind a variety of Harry Potter and Twilight films. I guess we could say that outside of those two series' though, this film had the best November opening ever. Domestically, with $90MM, it's already the seventh-highest grossing Bond film of all-time ("Quantum of Solace" sits at the top with $168MM - a number that "Skyfall" should have no problems toppling). In terms of opening weekend totals, it isn't even close. "Skyfall" is easily at the top of this list, with "Quantum of Solace" in second with $20MM less ($67MM).

Though many of the older James Bond films were not tracked internationally in terms of their overall worldwide grosses, "Skyfall" is still already the third-highest grossing Bond film of all time. "Casino Royale" tops the list with $594MM, but again, you have to assume that since "Skyfall" already has $518MM, $76MM more shouldn't be too taxing for this film. This all of course also bodes well for the fact that the film has a $200MM budget. It's hardly worth referencing at this point since it's already made north of $500MM, but nonetheless, the $200MM mark is still a number that I'm sure the studio hopes to hit domestically as well.

Reviews have been very strong for the film (91% on Rotten Tomatoes), and there's little to assume this film will suffer any kind of major drop-offs in the coming weeks. I really enjoyed the film, and will definitely be recommending it to others who haven't yet seen it. Look forward to some quality discussion on this week's upcoming CinemaCast.

In second this weekend was "Wreck-It Ralph". This was expected for the film, and the $33MM the film put up was just shy of the $35MM mark I thought it was capable of. With only a 32% drop from last week, this was again something expected from a Disney animated film in its second weekend. The film has now made just over $93MM domestically and $26MM internationally for a total of $119MM. It'll still be a few more weeks before we can really start talking about this film on any type of Best-Of lists - with Disney animated features, we all know the level of quality and string of success the studio has seen over the years. $119MM is an impressive and strong number, but in the world of Disney, it doesn't mean much yet.

The film's budget is estimated at $165MM, and I can't imagine it having many troubles hitting that mark. I won't be surprised if it surpasses it by the end of next weekend, taking worldwide totals into account. The film has reviewed very well, and it seems very likely that success will continue with this film.

In third place this weekend was "Flight", another film in an expected slot with a total that was pretty expected. It made $15MM this weekend, bringing its domestic totals up to $47.7MM. It had a budget of just over $30MM, so this is already well past that. The film has not released internationally at all as of yet, and I'm curious what the plans are for that, if any. Regardless, the film has reviewed very well here in the States, and with only a 39% drop this weekend, we can probably expect at least one more decent week from the film.

Rounding out the top five was "Argo" and "Taken 2". Ben Affleck's "Argo" continues to chug along, now with $85MM domestically, nearly doubling its budget of $44MM. It made $6.7MM this weekend and is now just a mere $7MM away from becoming Affleck's most successful film to-date and surpassing the $92MM that his last effort, "The Town", totaled. "Taken 2" was a bit of a surprise in the top five this week, but with $4MM it managed to sneak in. Even though the film has received generally negative reviews, it's been one of the highest-grossing action films this year. It's now made $131MM domestically and nearly $350MM worldwide. It's Liam Neeson's best effort to-date, already more than $100MM ahead of "Taken" ($226MM).

Outside of the top five, I do want to point out "Cloud Atlas", which unfortunately only grabbed $2.5MM this weekend. In three weeks, that now brings its domestic total to just over $22MM. And even worse, the film has only made $1.2MM internationally. For a film with a $100MM budget, let's just say the people who made "Battleship" and "John Carter" are looking at their own films and saying well, I guess it could be worse. It's unfortunate that this film hasn't registered much with general audiences, and it seems clear that it never will in theaters. I'll be curious to see what the perception of the film is ten years from now though.

Also, rounding out the top 15 was Steven Spielberg's "Lincoln". It only opened in 11 theaters this weekend, but it was nice to see it do well. The film made $900K this weekend, resulting in a per-theater average of just over $81K. That ranks as the 13th-highest per-theater average ever for a live-action film. Believe it or not, Kevin Smith's "Red State" sits atop that list with its $204K per-theater opening last year. "Lincoln" gets its wide-release expansion next weekend and I'll be very interested to see how the film will fare then. This was definitely a good start though.

I don't really see any big milestones on the board, so I think we'll just leave it as-is for now. Check out the full weekend numbers below, courtesy of Box Office Mojo: 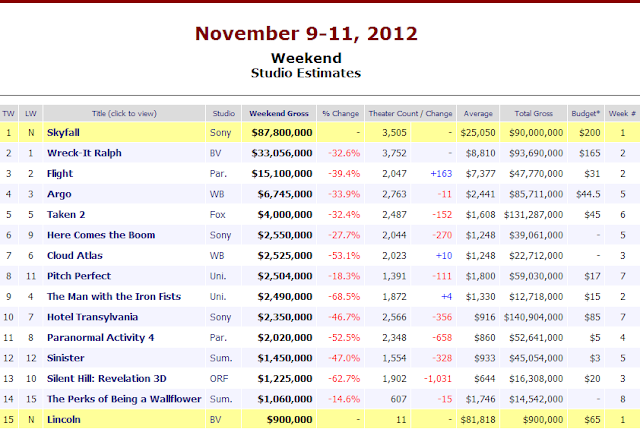