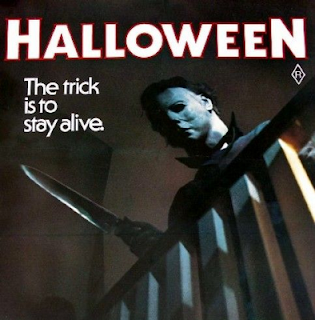 John Carpenter is one of my favorite directors of all-time, and his horror classic, "Halloween" is my favorite film from his filmography (even in my top 10 favorite films of all-time). The film jump-started the slasher phenomenon, and helped bring films of this nature to the big screen in wide variety - many films of this style were previously confined to midnight showings at smaller venues.
Anyway, thanks to ScreenVision, the classic horror masterpiece will make its way back to the big screen once again, just in time for the holidays. Accompanying it will be a short documentary that will play before the film, "You Can't Kill the Boogeyman: 35 Years of Halloween". For fans like myself, this alone is almost worth the price of admission. I'm sure I know most of what will be covered in the brief feature, but regardless, I always love watching and hearing trivia and facts about my favorite films.
The film will be hitting various theaters across the country, but will only play for a few select nights. Hit the jump to find out if it's playing at a theater near you, and to reserve your ticket!

As mentioned, the feature is presented by ScreenVision, one of the leading companies in cinema advertising (you probably see their ads and features before your film). Their network covers over 2,000 theater locations, and many will be showing Carpenter's film on or before Halloween night. You can hit their link for a detailed list of every theater (by state) that will be showing the film, including the dates for such. 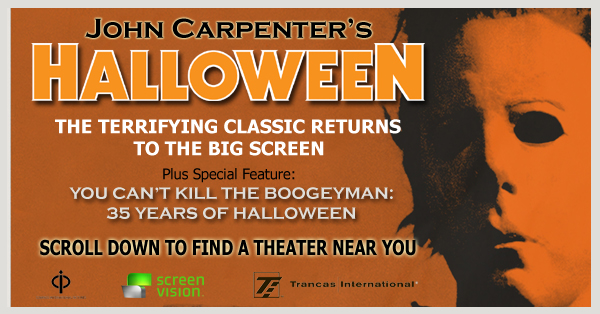 It looks like the most popular date is October 25th, with many following that up with an October 30th showing too. A handful of theaters will keep it going one more night and run the film on Halloween itself, October 31st. Unfortunately my theater will not be showing the film on the 31st, but I still might go to showings on both the 25th and 30th - it's not everyday you get to see one of your all-time favorite films in theaters!
This will be a lot of fun, and whether you're a big fan of the film or have never seen it before, I strongly urge you to check it out in theaters while you have the chance. The music and tension of the film is extraordinary, and you can't beat Carpenter plucking Jamie Lee Curtis out of nothingness for her first film role (plus, let's not forget that it takes place in my home state of Illinois!). There might not be a better horror film in terms of atmosphere than what is featured here, and getting the chance to see it on the big screen with fantastic sound and picture clarity is an opportunity that I hope most take advantage of.
Here's the original poster for the film, along with its official synopsis: 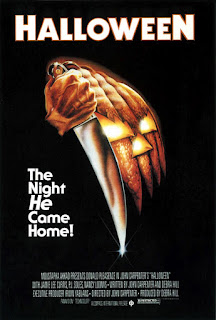 It was "The Night HE Came Home", warned the posters for John Carpenter's career-making horror smash. In Haddonfield, IL, on Halloween night 1963, six-year-old Michael Myers inexplicably slaughters his teenage sister. His psychiatrist Dr. Loomis (Donald Pleasence) can't penetrate Michael's psyche after years of institutionalization, but he knows that, when Myers escapes before Halloween in 1978, there is going to be hell to pay in Haddonfield. While Loomis heads to Haddonfield to alert police, Myers spots bookish teenager Laurie Strode (Jamie Lee Curtis) and follows her, constantly appearing and vanishing as Laurie and her looser friends Lynda (P.J. Soles) and Annie (Nancy Loomis) make their Halloween plans. By nightfall, the responsible Laurie is doing her own and Annie's babysitting jobs, while Annie and Lynda frolic in the parent-free house across the street. But Annie and Lynda are not answering the phone, and suspicious Laurie heads across the street to the darkened house to see what is going on...

Will you be heading to the theater for this?