Andy Serkis Gets Into Character As Gollum 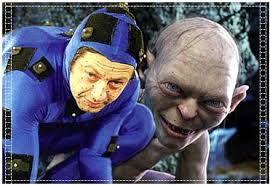 It’s safe to say I’m a bit of a fan of Tolkien’s Middle Earth universe. By a bit of a fan, I mean that I think The Lord of the Rings are the greatest films ever, and I’ve read all the books multiple times. So whenever we get news involving it, you’d better believe I’m all over it. SuperHeroHype posted an awesome video showing Andy Serkis (Gollum) reading an excerpt from “The Hobbit” as Gollum.

There are still quite a few people who don’t realize that there was an actual actor responsible for playing Gollum in Lord of the Rings, and not just someone doing voice work. That actor is Andy Serkis, and the performance he gave for those films was nothing short of brilliant. In fact, there was a lot of talk about him receiving a special recognition Academy Award for his performance. Serkis is easily the greatest motion capture actor of all time, so it’s great to see him getting back to playing his most famous motion capture role.

Along with the reading, Serkis also would briefly talk about getting back into character for the upcoming Hobbit film. Check out the video after the break.

That is the best video I've seen in a while. December can't get here soon enough. "The Hobbit: An Unexpected Journey" hits theaters December 14th.