Posted by Unknown on August 15, 2012
For this week's edition of the Top 5 Movie Guide, we struggled a bit to come to agreements on a filmmaker who provided a filmography worthy of review and analysis (don't take that to mean Ben Affleck had more quality than anyone else we could find, but the quantity was definitely there). Anyway, we cam across Ben Affleck in a way we rarely like to use, but do go to when we're out of options otherwise - today is his Birthday! Affleck turns, believe it or not, 40-years-old today. On a related note, he is also married to Jennifer Garner, who's latest film, "The Odd Life of Timothy Green", also opens this weekend. So this seems to work on a variety of levels. 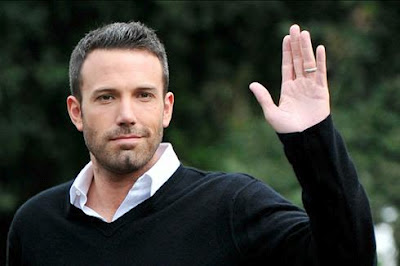 As for Affleck, he was born and raised near Boston, MA, and wanted to be an actor for as long as he can remember. One of Ben's best friends all throughout his youth was fellow actor, Matt Damon. They played little league together; went to all of the same auditions. Affleck and Damon found minor success catching on with director Kevin Smith and appearing in some of his various films. These were great in the independent community, but it still left them grinding out auditions for minor Hollywood roles. Eventually, they got sick of the rat race, and in 1997, living in a dingy apartment with Ben's younger brother and actor, Casey Affleck, they decided to write their own film, where they'd call the shots. That film was "Good Will Hunting", and it went on to earn nine Academy Award nominations, including a win for Best Original Screenplay. From that point on, roles came to him, and he was finally a commodity in the film community.

Since then, Affleck has amassed an eclectic variety of roles, to say the least. But there's certainly been a few notable hits along the way; hit the jump for each of our picks!

Alex Schopp -
I'm afraid that I enjoy watching Ben Affleck on screen much more than I'm supposed to.. I realize that he has his shortcomings, but overall, I feel like he's finally settled in and is finally acting in roles that work for him. I didn't care much for most of his early-2000's rom-com's, but overall I feel he's been generally enjoyable to watch.

Ben Affleck's best starring role. Other than this, I've enjoyed his supporting performances more than anything. This movie as a whole was a big surprise for me for me in 2010 (as such, bonus points for the direction, even though that's not part of this list).


Because of this speech. If you ever go into any kind of business where you become a salesman, trust me, this gets you jacked up. "Either you sell the client, or he sells you on a reason he can't. Either way, a sale is made".

I don't particularly like Affleck's role in this film (I realize you're not supposed to), but I love this movie so much that I had to include it. It's definitely in my Top 25 of all-time, and I go back and forth on whether or not it's Top 10 material.


Is this my favorite Kevin Smith film? "Dogma" is more fun, but I think in terms of real storytelling, I prefer this entry.


I want this to be higher up because this is one of my favorite films of all-time, but Affleck's role is still pretty raw here, and he nearly ruins a couple of scenes. But the film overall is still amazing, and a definite must-see, regardless of which list we're putting it on.


Ben Foutch -
I didn't include "Armageddon" on this list because for some illogical reason, looking at his smug face in the film makes me want to punch something. So, if you are not aware, this film helped lead to the decision to buy my first electric guitar. I will not, in good conscience, give him the satisfaction of having the film on a top five list in his name. He should feel privileged that I took the time to lend my contribution at all.

His character is such a prick. I wonder if he even had to act.

One of his better performances and an overall good film.

Uncredited, but I couldn't leave the film off the list, regardless of his minuscule screen time (still more than enough). Pure nostalgic value.


Derek Clem -
I don't want people thinking I don't like "The Town" (2012), because I do, but I think its great for so many other reason outside of Affleck's acting/character.

Enormous watchability and the soundtrack has enormous listenability. This movie was an event!

He has so many epic lines in this!

Ben Affleck REALLY IS the bomb in Phantoms, yo!

His minimal role in the movie puts this one lower on the list. He's still very good in it though. Plays a total creep in this movie, and does it in a funny way.

One of my all-time favorite movies. This is pretty easily my favorite disaster movie ever. There are so many great actors in this, and the soundtrack is epic. If you say you don't like this movie, you're lying or you suck as a person.

Like I said last week, I'm always down for a good heist movie. Well this is a GREAT heist movie.

Everyone in this film is at the top of their game here. You could argue that this is every main cast member's best performance in this one movie.

I finally got around to seeing this for the first time a couple months ago and I instantly loved it. It immediately became one of my favorite high school movies ever, and maybe the most realistic portrayal of high school I'd ever seen.

As always, the fifth spot was tough to choose. I went with this one because it was a lot more fresh in my mind than some of his older films fighting for a spot, and I genuinely loved the movie.

It may not be his very best work but it has so much nostalgic value that its impossible to put anything else on the top of the list for me.

Pure enjoyability! Great cast, great script, great everything really. This one also has a decent amount of nostalgic value, just not quite as much as my number one.

This might be his best work to date. He really proved that he has what it takes to be in this business. He has had an iffy career but if you watch this movie and then tell me you still think he is "iffy" then I will not respect you as a human being.

It's a must for an Affleck list. Watch it if you haven't seen it but I feel like most people already have, even if just by accident.

Affleck plays George Reeves who plays Superman. Sure I'll watch that! Oh yeah, and it's good too. The scene with the kid and the gun (which actually happened to the real life George Reeves) is a fantastic scene!


So that's what we're looking at this week. Plenty of titles to choose from this time around, but still a few that stood above the rest. "The Town" earned the most votes this week, hitting on four of the five lists (and collecting one first-place vote). Definitely one of the more notable films of Affleck's career, and one of the few that's held up amongst critics. A great crime drama that deserves to be seen by all.

After that, we have four films each with three votes: "Armageddon", "Chasing Amy", "Dogma", and "Good Will Hunting". "Armageddon" stands out from this group, as it collected a first-place vote on each list that it appeared on. A definite disaster movie staple, set on an epic scale. The other three are definitely much smaller in scale, but are all quality films (and two from director Kevin Smith). Two other films also managed multiple selections, "Dazed and Confused" and "The Company Men", each with two. "Dazed and Confused" earned the final first-place vote, and is probably the more notable of the two, but again, each seem worth keeping tabs on when scrolling through Affleck's filmography.

So as always, we hope that each of these film selections helps you to expand your knowledge of Ben Affleck's filmography, and leads to better and more enjoyable all-around viewing experiences.