Posted by Unknown on August 18, 2012
For this week's edition of the Top 5 Movie Guide, we look to the macho "The Expendables 2" for some inspiration. The film, as I'm sure you're all well-aware, gets its appeal by pulling in various action stars from our youth. We're quite the nostalgic generation, and something about seeing all of these old guys with guns in their hands again really gets to us. So, since the movie is already bringing those memories back, we decided to keep it going, get even a bit more nostalgic, and take a look at some of our favorite action films from the 80's, the era when these guys and this genre were in their primes! 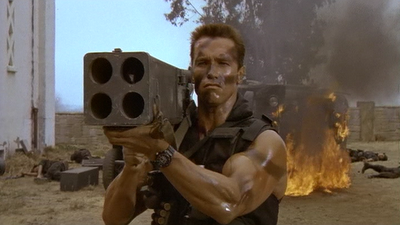 It does seem important to note that we're talking only about the gun-toting, blood-shedding, larger-than-life action films from the decade, and not just talking about "action" films in general - you could classify films like "Raiders of the Lost Ark" or "Top Gun" as action films if you wanted, but hopefully by this point you're not expecting any of that. Nonetheless, we did want to clarify, just in case. No, this list wasn't so much about the action genre as it was the characters and icons that were featured in the films. High body counts, excessive amounts of one-liners, muscles bulging out of arms, and more gun fire than you'd find in a modern-day war were the backbones we based these lists on (okay, some of these "heroes" didn't always use guns as their primary weapons, but regardless, they still managed to eff stuff up). Just pure and constant violence, set up in film's cheesiest era. It's a combination that might not sound like much, but it's got it where it counts!

Anyway, enough of that. In a style very similar to the genre we're referencing, let's forget the pleasantries and jump right to the action. Hit the break for all of this week's lists!

Alex Schopp -
I just want to note that I could have made all of these selections Sylvester Stallone or Arnold Schwarzenegger and been totally happy with it; they both have such awesome filmographies. Instead though, I picked one film each from the five major 80's stars in "The Expendables 2", and ranked them by preference. Seemed only fair to give them each a bit of attention. Feels wrong leaving off Kurt Russell though.


Arnold at his best. Hard to leave off so many others from his filmography, but I think this is his greatest example of 80's action. And since he's my favorite of the five, he takes the top spot here with relative ease.


Andy notes some more specific nostalgic ties to the film later on, but overall, this is probably my first true experience with Stallone and what he brought to the table in the 80's.


Not much other competition from Willis in the 80's, but still a staple in my mind. Plus props to Bruce for keeping the action going longer than any of these guys - he's had a pretty good hold on the action scene ever since.


How many times did we all watch this movie on USA when we were kids? Fighting competitions at the highest levels (and pretty similar to every other Van Damme movie we've ever seen). Jean-Claude Van Damme was the reason we played Karate (Steven Seagal, don't try to act like it was you).


Man, Chuck Norris really had his niche in the 80's action scene. He had a new title out nearly every year! This one is pretty similar to First Blood, Pt II, and not nearly as good. Still a great action flick worth checking out though.


Ben Foutch -
This was an extremely difficult list to make. Sorry for the generic titles, but these films represent what I grew up with and continue to revisit when the mood strikes. I'm not really happy about excluding some Stallone and Norris films, but this is how the cookie crumbled.


Nathan Hinds -
I was going to say that it's sad they don't make mainstream movies like these anymore, but after watching the trailer reel before "The Expendables 2", I think we're in for one last wave. Long live the stars of the 80's.


Of all the movies that I've ever considered my favorite ever, "Commando", although it was eventually dethroned, had the longest reign at the top. Plus, I should note that while I love "The Terminator", I love the second one so much more; I decided to leave it off of this list to make room for another film.


Making the 80's requirement by eight days is my favorite buddy cop film ever. Okay, it's just my favorite onscreen duo period. Plus, if you're lucky enough to ever find this on DVD, it usually comes in a pair with one of two other great 80's movies: "Cobra" or "Over the Top" (not really action, but definitely rockin').


It was really tough to decide between this and "First Blood", but I ultimately went with which one I watch more often. Although, really when I'm watching them, I'll usually just throw on "Rambo III" as well and make a marathon out of it. They're all great.


There was a movie that came out earlier this year about a futuristic society where they play a game and the last man/woman standing wins. I won't use the name because it has no business being referenced on this list, except to say that it's got nothing on "The Running Man".


It was so hard to leave movies like "Die Hard", "Lethal Weapon", "Mad Max 2: The Road Warrior" off of this list, but it ultimately came down to which had more nostalgia, which is ultimately what this entire list is about. Oh, and "Predator" had a mini-gun in it, which put it over the top.


Everyone has seen this so I doubt you need any info on it. Just know that I think its better than "Road Warrior" or even something like "Conan the Barbarian".


Another Arnold flick here and it's supreme in its future gladiator-type styles. Movies that are not quite that similar to this include "Roadhouse", "Highlander", "Over the Top", and "Bloodsport".


Kurt Russel in an action movie that will last through the ages due to one simple thing: Snake Plissken. It's almost as good as Kurt Russel in "Big Trouble in Little China" or "Tango & Cash".


I remember when I saw this movie for the first time with my brother and my dad while my mom was away for the night. Dad decided we were old enough to watch a few R-rated movies and eat some pizza. It was a good night. We watched all the "Rambo" movies and maybe even threw a "Commando" or "Die Hard" in there.


The only reason this isn't higher is because I wasn't sure if I was even going to put it on due to the extreme sci-fi nature of the film. Why did I leave off "Predator" or "Above the Law"? They were just a bit too sci-fi for an action list. By the way, "Above the Law" is not even close to a sci-fi movie, I'm just trying to get in as many honorable mentions as I can here!


So there we have it. Some of the best action films from the 80's as seen through our eyes. As usual, let's start with the biggest winners. Tons of repeat business this week, but still, no film appeared on all five lists. The closest was "Predator", which hit on four (and had two first-place selections). This is Arnold Schwarzenegger, action and the 1980's all at their finest. If by chance you never saw this one, give this film a chance. It won't let you down. Three other films appeared on three of the five lists this week: "The Running Man", "Rambo: First Blood, Part II", and "Die Hard". Honestly most all of the selections on the above lists are 80's action staples at this point, but I when doing you familiarizing with the genre, these are three more that we agree need extra priority applied to. And same goes for these last two films, "Commando" and "The Terminator", which where the only other films with multiple selections this week, each with two. Interestingly, "The Terminator" grabbed two first-place votes, while "Commando" earned the last. They didn't hit on as many lists as some of the other titles, but when they did, they were considered the very best that the genre has to offer.

We restate though, as it feels like genuine importance this week, that honestly all of the films listed above are classics for this genre, and really do deserve to be seen by all. There's not one pick featured in this post that you can go wrong with - even the "honorable mentions" that were thrown around like they're going out of style.

But as always, we hope that each of these selections helps you to expand your knowledge and appreciation of some of the best films that this testosterone-fueled genre has ever had to offer, and guides you to better and more enjoyable all-around viewing experiences.