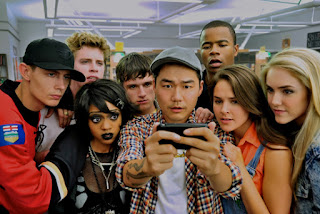 How in the world do you describe this film? Let's start with Sony Pictures' synopsis, because that's surely better than any possible way I could describe what I just saw:


An apocalyptic fantasy, horror, science fiction, action- thriller, body swapping, time-traveling teen romantic comedy starring Josh Hutcherson, Dane Cook and Shanley Caswell, Detention follows the local students of Grizzly Lake as they survive their final year of high school. Bringing even more angst to student life, a slasher killer has chosen their high school as his new home of slaughter. It becomes a race against time to stop the killer, which will in turn save the world - if only they can get out of detention.

If that doesn't seem like the weirdest amalgamation of a film you've ever heard of, then I don't know what does. This film has its successes, and in many ways does feel quite fresh and original. But how do you try to pack so many different genres and themes into one film and have it come off as anything comprehensible?

There's no doubt that this 90's homage is overflowing and over-saturated with so many different elements that it is, at many times, hard to process. Even five minutes after the film had ended I already knew I'd need another viewing to truly try and understand what was happening (I haven't yet decided if or when that will happen). The film is so quick that I'm not completely sure what each aspect of the different genres represented, or why they were present in the film - the horror element of the film was particularly confusing to me, however I believe it was meant to showcase teenage angst more than anything. Ultimately I'm left feeling that it was more a romantic comedy than anything, with other more fantastical movements revolving around it. It constantly parodies each genre that it plays with, and almost mocks the style that was presented in the 1990's. Saying that it's ironic might be the best way to describe it.

I think the movie is smart, but I also feel that, at times, it's too smart for its own good - or, maybe isn't smart enough. The film tries to fit in so much stuff, that a lot of the irony feels lost amongst the jumble. While a clear example of meta filmmaking, it does feel that there are better versions out there that don't struggle quite so much with their direction. I know what this is trying to be, and whether too smart or not smart enough, it does feel like it just misses on becomes something that could raise to cult status (at least for my generation; maybe the younger generation will be able to grab onto this a bit better than I can).

The film is a shining representation of the modern teenage hipster crowd, noting various references to late-80's and mid-90's pop culture (there's a wonderful montage scene that spans nineteen years, with stops at every three or so, outlining the different styles and culture of each, that was definitely one of the overall highlights in the film for me). The way the generation acts as if the 1990's were their own almost angers me though, making me more protective of my era than I expected to be. Similarly, however, since I actually lived it, I many times didn't mind and instead was happy to revisit those years. I imagine most film-goers older than sixteen will bounce between similar feelings as I did.

The film is by far the most adequate example I've seen for this current YouTube generation, constantly bouncing from one theme to the next with such pace that if you want to try and process anything for longer than three seconds you're left behind. It's always moving, incredibly fast-paced, offers constant genre change without warning, and all with exaggerated scenery and effects. While not what I generally like to experience in my films, for a culture that has an attention span just long enough to get through a three-minute YouTube video, this felt ideal. And though much of this comments might be coming off as crotchety, I don't mean them in negative context; I'm simply trying to showcase the differences in media consumption over different generations. Just because one processes information different than the next doesn't make either of them right or wrong. It's merely an observation.

I think that the younger crowd will be able to appreciate this film because this is exactly how they need to be approached for them to get through it. For us older generations, it's nothing more than a nostalgic trip back to the 90's, reliving themes and references from most of the popular films and culture. There is probably much of this film that goes over our heads and doesn't translate to film, but overall, teenage angst is teenage angst, and while the visuals and genre definitions have surely changed over the years, you can still spot the similar themes from a mile away. If you don't have a twitter account or aren't texting constantly then I wouldn't even waste your time with this film. But if you're at least familiar with the goings-on of modern culture, then this is probably worth a watch. It's not going to be the most fluid film you've ever seen, but it is unique and tries something pretty different. The Watchability probably isn't as high in reality as reflected below, but just because I know if I ever truly want to try and figure this film out, it must be watched again. I guarantee that no one will fully wrap their heads around this movie with one watch. On the other end, the Nostalgia probably should be higher due to all of the wonderful references featured, but since it does try so hard to work everything in, it didn't quite come off as powerfully as it could have.

Overall, it's an interesting watch though, and probably one of the most difficult films I've ever tried to express in words. But even so, I have inklings that this could go down as a defining film for the current teen generation. And hey, any film today that references Patrick Swayze and "Roadhouse" in order to learn how to throat punch for a schoolyard fight is okay in my book! 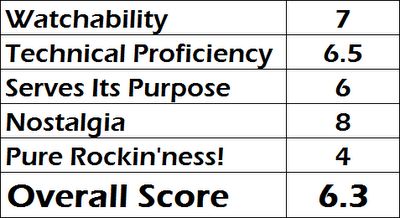