Movie Review: "Beasts of the Southern Wild" by Derek Clem 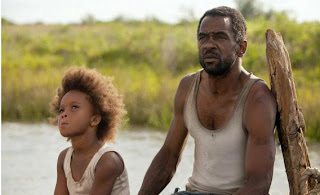 Release: 2012
Director: Benh Zeitlin
Writers: Lucy Alibar, Benh Zeitlin
Stars: Quvenzhané Wallis, Dwight Henry
Rated: PG-13
Run Time: 93 min
With lessons of preparation and readiness lining the film, Beasts of the Southern Wild tells the final chapters of a little girl named Hushpuppy living with her father in an outskirt bayou community where rising waters threaten their livelihood. As a reverse or inside out fable, the story evolves toeing ambiguous moments of fantasy and imagination. When all in the universe seems to systematically break, Hushpuppy knows she must make her greatest attempt to be the piece of the universe that fixes everything.


Through her father's heavy-handed guidance wrapped in tough love, Hushpuppy takes the steps needed, as instructed by her father, to learn community survival and more importantly, how to survive and stand up to the world independently. These themes are universal between a guardian and child. What makes them succeed here are the ways they are presented through Hushpuppy’s eyes. Through her character, everything takes on a layer of magic. Even, something as simple as frying meat becomes enchanting.
Quvenzhané Wallis is magnetic and absolutely adorable as Hushpuppy. She’s the driving force that allows the balanced ambiguity between fantasy and imagination to take place. Even in her “beast” moments she maintains an ethereal quality that illuminates away any impending darkness the story inflicts. As an audience, we feel safe with her. Dwight Henry, who plays Hushpuppy’s father, Wink, also commands the screen with his course, even brutal, personality and big loving heart. Both are extremely gifted and natural actors, bringing everything to their silver screen debuts.
Presented with grainy textures and lavished with an expert score that parades emotions through various peaks and valleys, the overall tone consistently swims freely among foreboding and jubilant feelings. The movie succeeds in attaining its highest marks by achieving a sense of realism through emotion and tone amongst all of the elements of magic, imagination and fantasy. The heart of the film is the beautiful showing of when innocence has to be turned into responsibility and survival. It all feels visceral and sincere and above all wrapped in strength and love.
I have high hopes for the score by Dan Rommer and Benh Zeitlin come awards season. If not a win at least a nomination. I haven't been this stoked for a score since The Social Network score by Trent Reznor and Atticus Ross. It doesn't disappoint in any way. It amplifies every scene, especially those centered around joy.
If you're looking for a movie that will take you on a journey through sensations of the sublime, progresses as visual poetry, and grounds itself as a story rooted in life issues we all must face, this is a must watch.