[Exclusive] Interview and Synopsis with Robert Remy on His New Film, "The Touchstone" 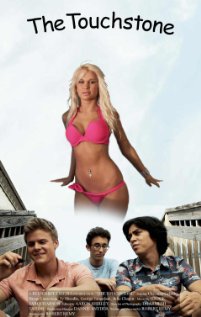 "The Touchstone" is a film that follows the path of three teenagers trying to loose their virginity any way they can manage it. It begins with a few failed attempts and some demoralizing situations until the day of their class field trip, whereupon they find a small stone idol. This idol at first sight seems like a neat little find, but they soon realize it's actually the find of the millennium! When kept on ones person, the idol makes you a magnet for virgins! And I don't simply mean that virgins flock to you, I mean that virgins want only one thing from you while you hold it. They want to give you their "V-card". The boys decide to take turns with the idol and see if they can once and for all lose their virginity and claim their place in manhood!

Read on for more, where I go further into what this movie is all about and how I thought it played out. I also got a chance to metaphorically "sit down" with Writer/Director/Producer Robert Remy and shoot the proverbial "breeze". We get into some pretty good questions, and literally "get down to brass tacks" on what this movie is really all about! (on a side note, I'm not sure I even know what "getting down to brass tacks" really means, let alone LITERALLY doing it. But you get it)

When watching a comedy it is important to understand that there are going to be silly antics all throughout, even when the heart of the story you are getting may be on a much more dramatic and serious level. That is pretty much what we get here, lots of jokes wrapped around a heart of gold. Could you really want much more out of a comedy? Now I'll admit, this isn't some big-budget Hollywood escapade starring Ashton Ketchup, but don't let that turn you off of the whole thing. There is indie magic at work here, and just remember that we can't all pop out a fifty million dollar movie any time we feel like. Sometimes you have to look a little further and say does this writer/director/producer know what they are doing? Would they make a great movie if given a budget? I'll say it right now, I put my faith in Mr. Remy for future projects. I want to see where he can go from here. Just as would be the case with anyone's first full-length project, there are admitted flaws in this film, but there is also vision and heart. And I think that as Mr. Remy gets more acquainted with the processes of such an undertaking he can accomplish some great things. And to better get an idea of where this writer and director was coming from on this project, check out our Q&A session below, where we dig into some of the specifics on the background of the project and where he hopes to go from here:


Q: This is your first full length film, did it go the way you had planned or were there any notable "speed bumps" along the way?

A: Anyone who makes a low-budget indie film and says it went how they planned is a big, fat liar. Or a Chechen terrorist. But seriously, challenges I faced included having my lead actor have to drop out just days before filming started because he wasn’t well versed enough in Excel to understand there were more shooting days than just one and couldn’t risk losing his job at Best Buy; having a sound person (paid, mind you) show up with absolutely NO sound equipment, setting us back half a day; getting escorted by police from a shopping mall for “security reasons” for filming there without permission; and having someone accidentally erase an entire afternoon of footage. And that’s not all.

Q: So you wrote, directed and produced "The Touchstone". Was it difficult to find the balance or was there as much freedom as you needed to have your vision come to life the way you saw it?

A: I have to admit it was difficult because of my having to wear so many hats. When I wasn’t acting as Producer or Director, I was having to pick up food as the Caterer, set up equipment as a PA, negotiate with location people as Location Manager, and occasionally hold the boom pole. There were some particular shots I wanted that in all the excitement I completely forgot about until it was too late, and others where I had to take a step back and say “it’s time to move on” because we needed to stay on schedule. I’d say the film is about 80% of what I envisioned it to be, which is at times depressing to think about, but then there were other scenes that even worked out better than I ever hoped just because we had to improvise and make do with whatever resources we had and it came out great.

Q: Do you have any limited or wide release plans for "The Touchstone"?

A: Right now we’re distributing internet-only through a company called Indie Rights. They’ve currently got us up on Google Play and YouTube’s pay-per-view, with other platforms like iTunes and Hulu soon to come. I’m still holding out for any other distribution offer I can get before going the self-distribution route. I hate the whole marketing side of indie film, and I dread all the work it takes to grow an audience for the film from the ground up. We’re waiting to hear from a number of festivals to help gain exposure, so wish us luck.

Q: Do you have any future projects in the works?

A: I actually have a horror feature that I’d like to make, but the only way I can really afford to fund that is if I can get something back on The Touchstone. Horror as a genre has a much more clear, established fan base than teen comedy, so that seems to me a safer bet for a next project. Especially when you’re not working with any recognizable name talent.

Q: If you don't mind, what kind of budget were you dealing with?

A: I’d rather not get too precise here, but let’s just say about the cost of a new domestic mid-sized sedan.

Q: How did you choose locations?

A: You’re no doubt familiar with that expression “beggars can’t be choosers?” Sweating locations was one of the more stressful parts of the whole production. It’s giving me hives remembering those days. Just getting the local public school system to allow me to film in one school was hard, but then I needed a second one. And I’d never know until we showed up how much free reign they’d really give me. I was booked very clearly for areas like a classroom and a hallway, but then I needed to branch out to the cafeteria, the library, the locker room, etc. And how would they react to hearing the raunchy dialogue, seeing a kid get a wedgie, see another get mauled by horny nuns? Luckily for the most part we were left alone and it worked out. One other stroke of genius on my part regarding locations was insisting at first that we film the massage parlor scenes in an actual Asian massage parlor. You should have seen the reaction of some of the mamasans when I informed them of my intentions - at one place the woman acted like she wasn’t hearing a word I said all the while never letting up on trying to sell me a massage; at another I was shoved right out the door with an admonition that “Mister, you is in the wrong place!” Needless to say we ended up filming those scenes in a donated office space.

Q: How long have you known you wanted to be in the movie industry?

A: I’ve been trying to sell spec screenplays to Hollywood for like ten years or more, but it’s just nearly impossible and just getting harder every day. I’ve made a couple short films in my day, but didn’t really have the directing bug per se. Making The Touchstone was really like an act of desperation for me – one last shot at getting some attention for my work that might lead to some sort of career in the business, doing what I love. Like I mentioned, I can’t really continue on from here unless I get some sort of ROI that will help me keep at it.

Q:Would you say there are any movies that you have seen that influenced any specific camera angles or scenes that you used in "The Touchstone"?

A: Not really. I intended to have a bit more of characters addressing or looking into the camera a la Ferris Bueller, but those were the types of shots I forgot to get as planned when I was busy laying out Subway sandwiches for the a band of starving teenagers in-between takes or trying to convince my unpaid actresses to go topless for their art.

Q: What is your favorite movie?

A: Wow, that’s really tough. It changes every week for me, a thing like that. For purposes of this exercise, let’s go with "Caddyshack", but I really enjoy movies in most every genre.

Q: Would you ever revisit the Touchstone in another movie or has the story of the little stone idol been told?

A: I could see a sequel if this film is a success – there’s so much fun you can have with such a premise, the possibilities are endless. But not just for the hell of it, I don’t think so.


Remember to check this movie out on Google Play or YouTube via pay-per-view. Keep checking with iTunes and Hulu as well to see if/when it shows up there! A big thanks to Robert Remy on his time for this interview, and I speak for everyone here when I wish him good luck with this film and on future projects.

As always, leave your comments or questions below and we'll be more than happy to make you part of the convorsation!
Andy Schopp Interview