Look, I understand that from the title alone, you probably know what to expect from this without a review. But, just because you never asked for it, doesn't mean you aren't going to get one. While not as successful as the previous installment, this is still the type of film that flourished in video rental stores in the 80's (remember those?).  It's also the type of film that you would've called "fun for the whole family" twenty years ago when some righteous boob action wouldn't cause too much concern with the parental units. Oh, how things have changed.

Bringing back some characters and taking place some time after the original Critters, this sequel stays with the zany, mildly bloody, and somewhat family-oriented style set by the first film. Brad Brown couldn't have returned home at a worst time. As you probably could have guessed, the critters are back, and they are hungry. With the help of some intergalactic bounty hunters (one of whom shape-shifts into a blonde n' busty vixen out of a nude magazine) and his new girlfriend, they must stop these mischievous little ankle biters before the town becomes overrun. And yes, there is some nudity.

This dated creature-feature houses some professional actors backed by a modest budget ($4.5 million), which is not too surprising considering the success of the first film. So, needless to say, the acting is better than you would expect with the source material. Also, the practical effects work for the year it was released. It was directed by Mick Garris, who is not a great director, yet is still known for a few Stephen King adaptations. But, don't let any of the positive aspects fool you. This film was meant for that time period and it probably should have stayed there. It doesn't have the talent that Gremlins touted behind and in-front of the camera, nor does the script have any intentions of elevating the experience above B-level cinema (your Stephen King and Superman references won't save you here, Garris). Despite all of its flaws (and there are many), it still has the charm and mildly entertaining quality that most of these low budget films possess. Plus, the local eatery has a catchy tune:

"Hey little buddies, come gather 'round
This here's the very best eating in town
The Hungry Heifer's the place to be
Lip-lickin' good, you can take it from me
Try a Polar Burger and some Buffalo Chips
And wash it all down with a Moo Shake
Pat your tummy and smack your lips
Suck for hours on your fingertips
At the Hungry Heifer
We﻿ don't give you a bum steer."


In short, this is a poster child for guilty pleasure cinema. Believe me when I say that there is no judgement here (hell, I own the DVD). I've been known to be quite fond of little, fury alien creatures that roll down hillsides in search of delicious cheeseburgers to annihilate. Films like Critters 2 were a big part of my childhood, and there is a certain level of pride from that. If it has taken you this long to check it out, it's probably for nostalgic reasons, which are the only reasons to even consider watching this. Just don't expect the trip down memory lane to be as exciting as it was when you were young. Although, in a group setting where growing levels of intoxication are present, this could be well worth the effort. 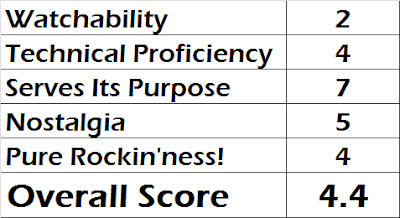