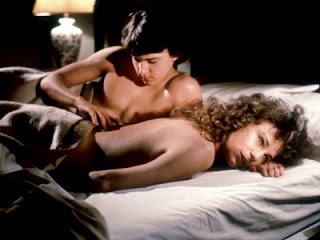 
Class is a pre-Brat Pack film that stars two core members and is also the feature film debut of Andrew McCarthy (founding member), John Cusack, and Virginia Madsen.  Aside from the association with Brat Pack canon, it also borrows several themes and plot points from The Graduate.  However, this doesn't even compare in terms of quality with The Graduate, or most of the Brat Pack films.  It has an adolescent spirit and wears its heart on its sleeve, but the movie as a whole just doesn't quite come together.


Johnathan (McCarthy) is a new student in a prestigious prep school who hopes to get into Harvard.  After an awkward start, he quickly forms a friendship with Skip (Lowe).  Their friendship is tested as Johnathan becomes involved in an affair with an older woman, who happens to be Skip's mother.

The film is quite messy when it tries to establish a cohesive tone. Interspersed throughout are moments of slapstick mayhem that break apart interesting, dramatic tension (maybe the studio meddled with production). The weird thing is that both of these techniques work. They just don't belong in the same film. I can almost see it work as two different films. One that is strictly a teen comedy, and the other is a coming of age drama . It really is a shame, because it could hold a better position in movie culture than its current cult status. Although, borrowing so heavily from and being compared to The Graduate hurts the film more than any technical issues.  That film was a classic and you better have something amazing up the sleeve to even attempt to be in the same league.  Which this definitely isn't.

With that being said, the film is cast perfectly.  Even though they are early film roles, McCarthy and Lowe give more than convincing performances.  I really felt that these two were best friends, and that level of acting propelled the tension between the two later on in the film.  Alan Ruck and John Cusack are mostly used as side players, but add more to the level of friendship that permeates the film (which is the main theme).  After watching Class, I could see why most of these actors developed solid careers.

The bottom line is that you don't need to set this as a priority watch.  It's nice seeing younger versions of these well known actors and the movie isn't a complete waste of time, but it just doesn't know what kind of film it wants to be when it grows up (oddly fitting).  It awkwardly works as a piece on friendship and the boundaries that can be crossed, so in that respect is another reason to maybe check it out.  Just don't go out of your way to watch it. 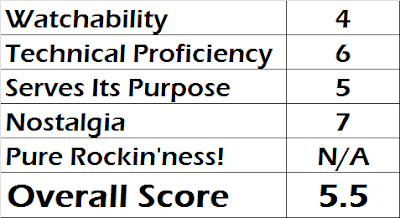