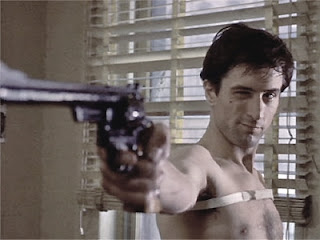 Currently sitting at #52 on "AFI's 100 Years...100 Movies" list is Martin Scorsese's gritty, iconic masterpiece, Taxi Driver.  Robert De Niro gives a career defining performance at such an early point in his career, that some A-Listers don't achieve in their entire filmography. However, his performance and Marty's direction are not the only reasons to spend one-hundred and thirteen minutes of your life. This is an unforgettable, timeless character piece that will resonate in film culture for as long as people want to sit in front of a screen. Fasten your seat belts, have a tip ready, and for your own sake, don't say anything that will rub Travis Bickle the wrong way.

Travis Bickle is a disillusioned, honorably discharged marine that makes a living as a taxi cab driver. His life is an emotionless shell until a potential love interest, Betsy (Cybil Shepard), and an under-aged aged prostitute, Iris (Jodie Foster), become the focus of his attention. Balancing his work and infatuation for Betsy proves to take a toll on his already warped mind, which goes down the rabbit hole after Betsy gives him the boot. His hatred for the "scum" of society is brought even closer to the surface by this event and soon sets sight on a new goal. While gearing up for his personal vendetta against those deemed as low lives, he soon takes on the role of a father figure for Iris. This new purpose and responsibility falls on his shoulders, and in order to make things right on the street, he decides to take out the "trash", embodied by a campaigning politician and Sport (Harvey Keitel), the sleazy pimp who controls Iris.

The film draws you in immediately as Bernard Herrmann's score blasts your eardrums with a sonic bombardment that symbolizes the boiling kettle of instability that is our protagonist. It soon switches gears to another recurring melodic theme that follows Travis on his soul searching path to finding a purpose in life. That, in a nutshell, is Taxi Driver. Travis, like every other member in society, struggles to find something positive to hold on to. Regardless of his mental instability, he wants what all of us desire: to be happy. This is what makes the film such a great character study, and a timeless classic. If you look close enough, there are traits in this tortured soul that most of us can relate to. What separates Travis from the functioning members of society is his murderous rage and outlook on life. This is what also makes the film so powerful. How many Travis Bickles have you met in your life, or walked by on the street? The answer might shock you.

Nothing more can really be said on how great of a performance De Niro put in front of those cameras, but I'll continue the brown-nosing tradition of every other critic. He commands the screen from the second his eyes appear in the rear-view mirror. He also achieved what was so important for us as an audience, in finding a sympathetic yet creepily frightening approach to this character that could have easily come off as unlikable. We see him for all of his "good" intentions (trying to help Iris make a better life for herself), but as outsiders, understand why Betsy and every other character besides Iris doesn't trust him. To put it simply, his behavior is a little odd. Harvery Keitel, Cybil Shepard and Jodie Foster also gave memorable perfomances. Keitel perfectly played a complete sleazeball (pretty much what you would expect from a pimp) who knew how to control the young and impressionable Iris. It wasn't fear of violence that kept her from running away, but having someone there to give her a passionate and loving embrace (a sense of security), regardless if the feelings behind it were fake. Foster showed a vast amount of depth for such a young age and Shepard brought a graceful, calming presence whenever she was on screen. This movie was cast perfectly.

Scorsese, very early in his career, shot a near (if not) perfect film with Taxi Driver. It takes you across the seedy underbelly of the city streets, through the maladjusted mind of a lonely cab driver, forcing the experiences from his point of view, while also giving glimpses from an outside perspective. I don't know what the film climate was like in the 70's, but one can assume that this was a shocking film for many. It isn't coated in violence, but when it does hit, Scorsese doesn't flinch away. Yes, it contains foul language, racial slurs, graphic violence and difficult subject matter, but don't let that deter you from checking this out if you haven't already seen it. Every vile and disgusting thing uttered and displayed in this movie is not from prejudice, but from the perspective of the troubled personalities that inhabit it. Taxi Driver is a powerful work of art that should be experienced at least once. If you can handle it.