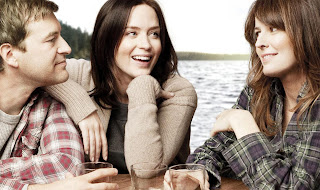 
It really is a shame when independent gems like Your Sister's Sister are delegated to limited releases in often overlooked art house theaters. Director/Writer Lynn Shelton deserves a bigger chunk of the market with this entertaining, intelligent film that focuses on human connection and the barriers that hinder their fruition.


Jack (Mark Duplass) is having a rough year after the death of his brother. When he makes an awkward eulogy at a social gathering, his best friend Iris (Emily Blunt) confronts him about his erratic behavior. In order to get him back in the right state of mind, she offers up her father's island cabin for some relaxation and personal reflection. At the cabin, Jack has a one night stand with Iris's sister, Hannah (Rosemarie Dewitt), after they connect through a drunken introspective conversation. The next day, Iris arrives unannounced causing some awkward tension between the three of them.

Structurally, there is nothing new being represented here. However, it is far from conventional and the personalities, dialogue and acting are natural, making every scene feel like a real life situation is unfolding. The characters are flawed, acting in conjunction to their own concealed motivations, which tend to bend the truth and obstruct real connections between them. This down to earth approach puts you right in the center of these peoples' lives, forcing you through their emotional roller-coaster of self discovery; it is the film's best asset.

Although, it doesn't hurt when the three main actors that support the film hit every beat with an effortlessly honest technique. I don't know what the script looked like or how it translated to the screen, but the scenes felt heavily improvised with no forced line delivery. There was a dinner scene in which Jack was getting a little too much attention from Iris, so Hannah told an embarrassing story about Iris. Iris in turn took a stab at Hannah by revealing that her potatoes were not prepared by vegan standards. This malicious battle of emotions emphasized the free flow feel of the movie and was highlighted by believable reactions that felt like they came from real siblings. Duplass, while not being a stranger to independent cinema, steals nearly every scene where his character is present. It was great to see these characters developed throughout the course of the film.

It is refreshing to see a romantic drama/comedy that doesn't feel like it is sticking to a particular formula. There was never one point where it felt sappy, or attempted to force a certain emotion out of you. It was also never "fully" predictable in terms of how the conflict would play out and be resolved. I would like to say that more Hollywood films should take this naturalistic approach to relatable human dramas, but then films like this wouldn't stand out in a sea of infuriatingly lazy, stale and forgettable garbage. Supposedly shot in only twelve days and on a shoe-string budget, Your Sister's Sister managed to be one of the best film's I've seen this year. 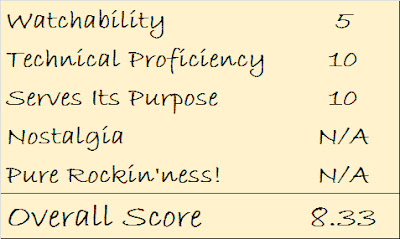