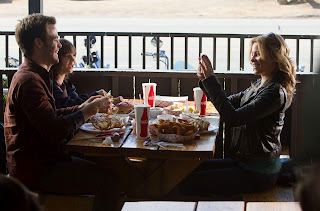 If you haven't heard of People Like Us, it really comes as no surprise at this point considering the disappointing box office numbers. But there is a lot to like about this overlooked, uplifting tale of troubled, fractured family units coming together. It sort of loses direction during the middle portion, but ends up standing tall due to shining performances from every cast member and a deeply touching climax.


Sam (Chris Pine) is a hot shot salesman who finds himself in some deep water with the FDA after he botches a soup related barter. Later that same day, he finds out that his father has passed away, and must return home to his mother (Michelle Pfeiffer), whom he carries childhood resentment towards. Sam arrives home after the funeral with his girlfriend Hannah (Olivia Wilde) at his side, and doesn't receive the most welcome invitation from his mother. Shortly after, his father's lawyer gives him a pouch that contains $150,000, carrying a note inside instructing him to give the money to someone name Josh (Michael Hall D'Addario), whom he'd never met before. Following the trail of a woman who lives at Josh's address, it becomes apparent that the woman, Frankie (Elizabeth Banks), is Josh's mother, and is his sister from another mother. He must decide if he can follow through with his dad's wishes while dealing with this complicated, emotional matter, or if he'll use the money for his own financial burdens.

Sam's transformation and growth is handled in a satisfyingly believable way. Yes, we knew he would make the right decision in the end knowing that this is a mainstream drama, but it was the psychology that kept it from being overly redundant. His emotional immaturity at the beginning of the film stemmed from not having anyone to really connect with during his early adolescent years. So, whenever anything got too emotionally heavy, he felt alone and had to take flight. This made a nice counter balance to Frankie, who as a child didn't really have the best domestic structure, and consequently created a strong exterior, not letting anyone get to know her on a deep and personal level, but she never ran from the people she loved. Sam finally found someone he could connect with in Frankie. Through her, he developed the nerves and sense of responsibility to stand up to difficult life situations, especially if they involve family. In turn, Frankie finally found a male figure that she could trust and confide in; something she never had before.

It is those types of situations that happen to fill up the middle portion of the film. They tend to work for the most part, but at times come off a little awkward. Sam knows that he is Frankie's brother, but she is unaware. When they are together you can see the attraction in her eyes and body language, especially when she sees how good of a father figure Sam is for her son. It tended to come off a little creepy, which is probably what the filmmakers were going for because it added a certain level of tension between the characters, making their scenes more dynamic. There were also some standard, obligatory comedy moments that just didn't work for me. It really is a shame, because when the film gets heavy, it hits pretty hard. To be honest, if I'm watching a heart-felt drama, comic relief is unnecessary if it comes off cheesy. They had good material here, but apparently were afraid of making something great. Do we really need to dumb down the film in order to make it more appealing? If so, joke is on the studio; your film was a flop.

Chris Pine didn't exactly do anything that is outside of his comfort zone here, but still held down the lead actor position comfortably. For me, it was Elizabeth Banks that gave the standout performance. She showed a wide range of emotion, letting just enough of that concealed vulnerability through, allowing a more layered, nuanced performance. I would have liked to have seen more scenes of Michelle Pfeiffer, allowing her character to develop a little more, but it probably wasn't necessary for the story. Some of her scenes with Pine were powerful, and did actually say more in terms of actions rather than dialogue, but I still felt she was underutilized.

This is an above average Hollywood drama. Don't expect a groundbreaking cinematic experience or anything that is going to raise the bar for the genre. However, it is a solid feel-good, emotional story that is supported by a likable, capable group of talented actors. I would have liked to have seen the script handled with more respect, which would have made the middle portion feel less frustrating, but I am thankful for the superb payoff at the climax. If you need to lift your spirits after a rough day, or just want a casual film to pass the time, then check this out at your local theater. If not, definitely wait for that rental. Regardless, it's worth the watch.

Keep in mind, with the Movie Guide below, the overall score is affected by the low Watchability ranking. It just means that I'm never trying to check it out again unless the situation is unavoidable. Just a personal preference, as it is generally not my cup of tea. 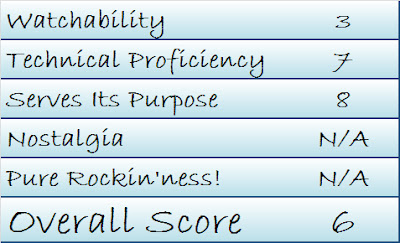