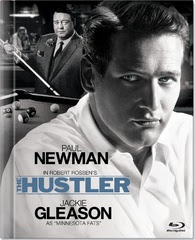 The Hustler, widely considered as a modern classic, is an expertly crafted production that should be in every film lover's collection. This 50th Anniversary Edition is loaded with informative special features and is without a doubt, the best looking transfer ever released for home video. Inside you can look forward to a review of the film as well as my thoughts on the video, audio, and special features of this Blu-ray edition.

Hit the jump for our Blu-ray review of The Hustler!

"Fast Eddie" Felson (Paul Newman) is an alcoholic pool shark that travels around with his friend/manager Charlie Burns (Myron McCormick) hustling unsuspecting players out of their hard earned cash. Feeling ashamed after losing most of his money to Minnesota Fats (Jackie Gleason), touted as the best in the country, he walks out on Charlie. At the bus station, he makes a chance encounter with the equally flawed and lonely, Sarah Packard (Piper Laurie); they soon fall in love. Still feeling lost and without purpose, Eddie decides that he must raise money in order to have a second chance with Fats. Bert Gordon (George C. Scott) a cold hearted business man, gives him the opportunity to make some by backing him against Louisville millionaire, Findley (Murray Hamilton). Little does Eddie know that at this match, he will have to make decisions that cause certain repercussions to his relationship with Sarah and will give him a new outlook on life.

The film is such a dark, gritty look into what it takes and means to be successful. Is success measured by money and power, winning or losing, or in this case by character? More importantly, what is the cost to obtain success. Eddie is confident, reckless, and no doubt just as talented, if not more than Fats. Fats is cool, concise, thoughtful and elegant around that pool table. Eddie almost seems like a younger, naive version of Fats who hasn't really experienced anything difficult or painful that life can throw in your face. The only thing that holds him back is that deep down, he's always looking for a reason to lose. Sort of like an addiction to self deprecation. So, what separates these two master players besides the maturity and age differences is that Eddie hasn't built character. It's just like Bert said, "Everybody's got talent. I got talent. You think you can play big-money straight pool or poker for forty straight hours on nothing but talent?".

The film plays of off a thoughtful, sincere, and above all else, realistic tone; I can see why this resonated with audiences in the 60's. What gives the film power is the relationship between Eddie and Sarah, without which would have been a standard sports drama. They are both lost and confused, which is dangerous when brought together. Even Sarah knew trouble would be around the corner when she turned Eddie away after their first kiss. They found solace in their shared addiction to alcohol, and at first only had a physical relationship, but the feelings developed into something deeper. However, Sarah was the wiser one. She knew the power of love and the responsibilities involved in saying those words.

Sarah was right about calling everyone in Bert's world, "perverted, twisted, and crippled". There is a coldness and complete disregard for other peoples well being. What matters to them is money, power, and an overall outcome of individual gain. George C. Scott really nailed this bleak persona in a truthful and believable way. He wasn't outwardly abrasive, like most thugs maybe appear, but when you looked into his eyes, all you see is a dark abyss of emptiness. Much can be said about Jackie Gleason's performance. He wasn't a "bad guy" like Bert is portrayed, and doesn't even have very many lines, but it was all about facial expressions and body language. You could see that all of the character this man possessed came at a hefty price. Behind his eyes was loss, despair and guilt; He was desensitized from past experiences in a cruel and unforgiving world, no longer capable of caring for anything besides a fat income.

This was the film that solidified Paul Newman's ability to carry a movie. He had always been likable in every other role, but his portrayal of a naive, self-sabotaging pool shark is expertly layered. You can see the inner conflict bubbling from the inside; his longing for contentment is like a dirty, smoggy aura that emanates from within, snaring anyone that comes in contact. What makes this character so great, is how relatable he is as a human being. It's probably safe to say that most of us have been lost at multiple points in our lives, much like Eddie. Regardless of the time period, it still feels modern. The problems that Eddie faces are still relevant and poignant. His fight for purpose and redemption is equal parts inspiring and tragic. Too bad I didn't see this in time for our Top 5 Anti Hero list, because this would surely be on there. Oh well, I'm sure there will be a Sports Movie list in the future.

What also makes this film standout is that its not a standard sports drama. Sure it focuses on "the game" a few times and highlights the action on the pool table, but its main focus is on the characters. Eddie's inner struggle and his relationship with Sarah is what really drives The Huster. The human drama creates a powerful, relatable anchor, instead of relying on the suspense derived from Eddie's various pool match-ups. Sports highlights will only take a film so far, but the human element will make it relevant for future generations.

This is a classic, thoughtful piece of cinema and is respected in the film community for good reasons. However, it's not overly pretentious in its ambitions. This film is supported by interesting, relatable characters that act for personal motivations rather than existing for the sole purpose of progressing the narrative; it is truly timeless in terms of human desires and how we view success. The Huster is beautiful, touching, shocking, inspirational, and most of all unforgettable. If you haven't seen this yet, definitely check it out. If you have, give it another try. Maybe you will notice something different. 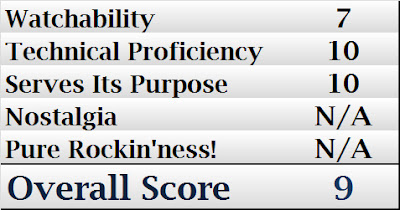 The Hustler is displayed in an AVC encoded 1080p transfer in a 2.34:1 aspect ratio. To simply say that this looks stunning is an understatement. The film appears sharp and full of detail, keeping the integrity of the original print. Contrast and shadows are also excellent, enhancing the allure of the vintage bars and pool halls. If more classics from this era have gotten as good of a treatment for Blu-Ray, my collection will soon blossom. Well done, FOX.


You can hear the limitations of the time period as this film is fifty years old, but that is what adds to the charm. At the end of the day its still an immersive, well mixed 5.1 DTS-HD master. Maybe some day technology will be advanced enough to properly enhance vintage sound recordings.


There is a pretty solid selection of special features represented here with informative and entertaining insights into the production. I still felt it didn't quite knock it out of the park:

Bottom line is that this is a classic film represented by a superb Blu-Ray treatment. If you were holding out all this time to make the best purchase, this is the best it's going to get until a new technology trumps Blu-Ray. Do you really want to wait that long? 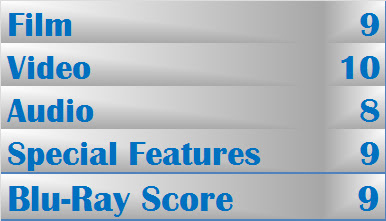